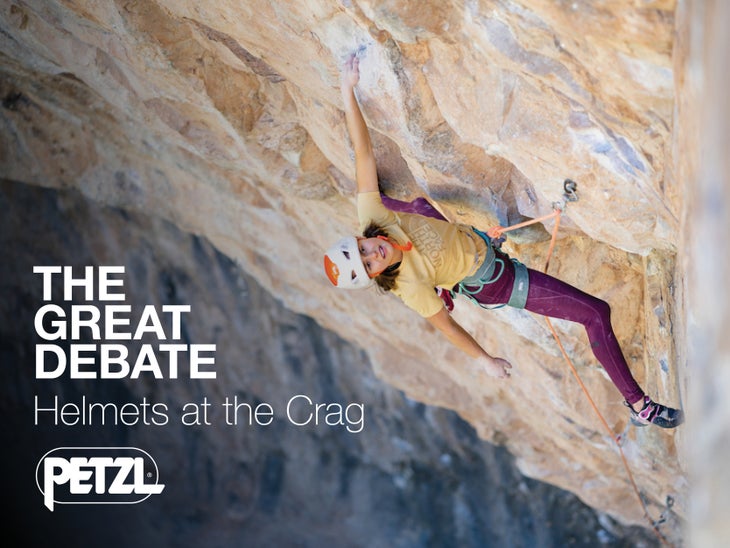 In 2019, seeing a party rope up for a multi-pitch climb without helmets is akin to a snow leopard sighting, or spotting one of those ancient guys who tie in with bowlines at the gym to top rope.

But for single-pitch climbing, particularly on sport routes, the practice of dome-protection is less universal. Watch any of the Weekend Whippers on our site. One in every five features a climber nearly becoming a vegetable, all because he or she failed to strap on a helmet. In almost all cases, the injured party is only one pitch off the deck.

As climbers, we practice our sport in a realm contingent upon strict adherence to safety standards. We wear harnesses with leg loops instead of just swami belts, we retire our ropes when they get old or log too many falls, lots of us even replace our carabiners if they’re dropped. Ironically enough, however, many climbers religiously adherent to these standards still shy away from protecting their heads.

Head and brain trauma isn’t the most common injury climbers face, but it is, without a doubt, one of the most debilitating, long-lasting, and avoidable. Head injuries are more likely to require hospitalization than any other climbing injury, and the repercussions of traumatic brain injury, if not fatal, can persist for weeks, months or years, affecting concentration, memory, motor function, and more. 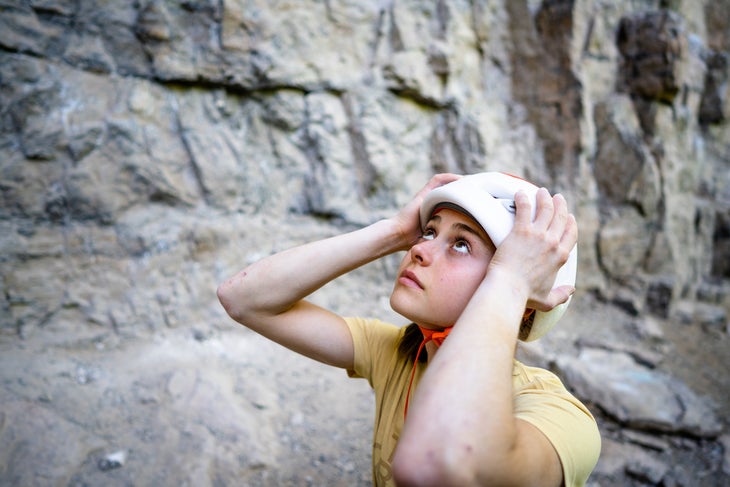 We’ve all climbed without a helmet at some point, or at least thought about it, and most of us have had close calls, or experienced some second-hand. The question is: why?

Often we are lulled into the belief that more inherent danger exists when embarking on multi-pitch routes, and thus a helmet is necessary. But the same hazards we wear a helmet to protect against in multi-pitch climbs are also present in single pitches. Falling rocks, bad whippers, dropped gear—it all can happen 50 feet off the deck just as easily as it can 400 feet, and the casual nature of single-pitch days can lead to a complacency which sometimes makes these accidents even more common.

Petzl athlete five-time U.S. National Champion climber Emily Harrington spoke with Rock and Ice about helmet use. Harrington admitted she didn’t grow up wearing a helmet while climbing, but these days she always wears helmets on traditional climbs, and sport climbs where rockfall or dangerous falls are common, particularly after a friend was hit by rockfall in the Owens River Gorge.

It just doesn’t make sense to leave her helmet behind when climbing because, Harrington said, “head injuries are devastating and for the most part, avoidable with a helmet.” Though she currently still climbs sans-helmet on overhung sport routes with properly spaced bolts, she’s trying to wear her helmet more often whenever possible. “It’s hard to adopt a new habit once you’re so used to something else,” she said, “especially when you haven’t experienced firsthand the consequences of not wearing one. And climbers are a finicky group. Sometimes I don’t carry an extra draw or my brush during a send attempt. Our ropes are getting skinnier and everything is becoming so light. Anything that feels like it may hinder the send is hard to adopt as a part of our kit.” 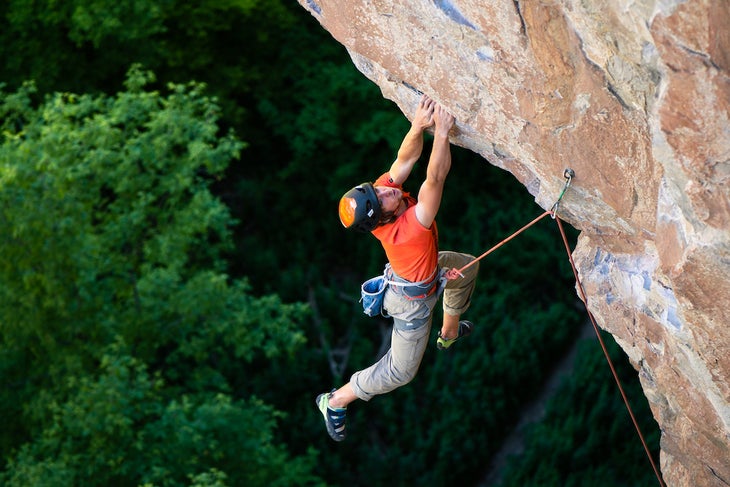 This is where Petzl is changing the game, with new lightweight helmet models like the METEOR and SIROCCO, which come in at 240g and 170g (about the weight of a billiard ball), respectively. “I’ve used both the METEOR and the SIROCCO,” said Harrington, “for big wall climbing, trad climbing, and ski mountaineering. I must say they are light and comfortable and easy to wear.” As a result of these new models, Harrington noted, “I’ve been wearing my helmet more recently than I used to…”

Aside from weight, a major problem in the industry is the protection helmets offer. The vast majority of helmets on the market today are focused on protecting the top of the head against falling rocks and direct blows, but injuries from the front, rear and sides occur just as frequently in a fall, and are just as dangerous. A Climbing article on helmet use in 2013 noted that, due to industry testing standards, the protection most helmets offer for the front, rear and sides of a climber’s head is often lacking or nonexistent. “Helmet testing doesn’t address the needs of modern rock climbers,” read a sub-header. 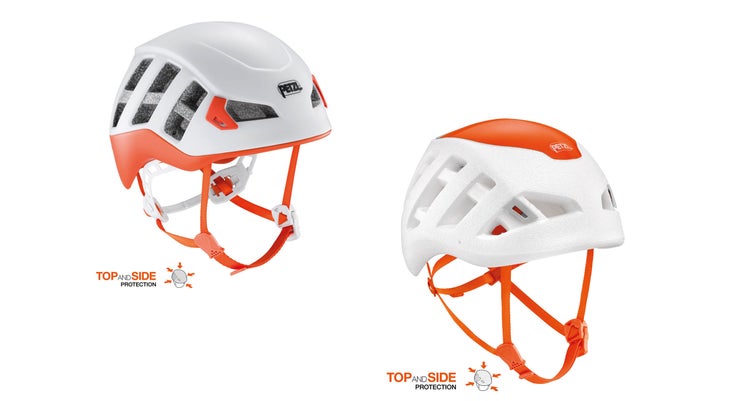 The Petzl brand, however, has adopted a new in-house standard to meet this challenge, adding a TOP AND SIDE PROTECTION label to their products, which guarantees the helmet’s ability to provide a certain level of front, side, and rear protection. Both the lightweight METEOR and the ultra-lightweight SIROCCO offer this guarantee, as do the sturdy BOREO and the PICCHU children’s helmet. This means the helmets meet the industry standard EN 12492 and UIAA 106 tests, which focus on traditional top protection, in addition to the new Petzl in-house protocol, which involves dropping 5kg weights on the front, rear, and sides of the helmet to test all-around protection. As such, Petzl is now the only climbing helmet manufacturer that guarantees a level of protection from the front, rear, and sides, in addition to impacts from the top.

The added protection of Petzl’s new line is vital to mountain athletes like Harrington, whether for ski touring, rock climbing, or mountaineering. But for her, the important thing is that the Petzl helmets are easy to clip on and put out of mind. In Harrington’s mind, the METEOR and SIROCCO are synonymous with “comfort and weight like no other.”

“The new SIROCCO is incredibly light,” she said. “I often forget it’s on while climbing.” 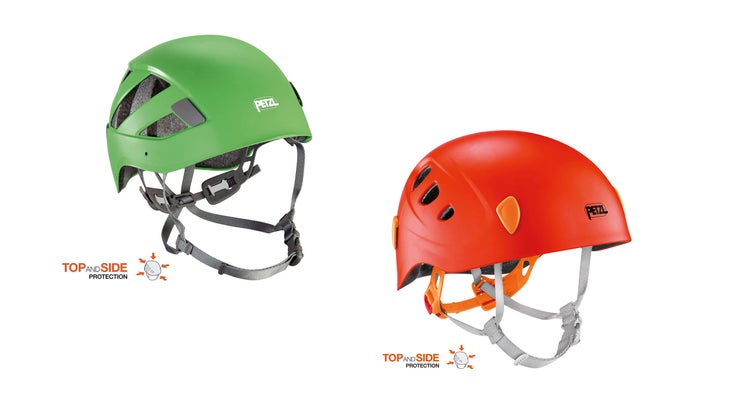 It’s true that many climbers, like Harrington, used to eschew helmets. We’ve all seen the photos of Chouinard blasting up walls in a knit toboggan, or the Stonemasters leading routes in the Valley with only a mop of unwashed hair to protect their noggins. But those guys also roped up in swami belts. They anchored in with pro we wouldn’t dream of touching now. They climbed in boots we wouldn’t wear except as a fashion statement. Climbers used to hip belay, now we don’t. Climbers used to climb with hemp rope, now we don’t.

Rocks fall. Holds break. Gear drops. And no matter how long we’ve been climbing or how easy the route is… sometimes we take whippers that knock our noggins against the wall and make us forget what we ate for breakfast that morning.

That happens on big walls, and it can happen just as easily on single-pitch routes.