But, as climbers, we do like to take it seriously.

We want to debate why Sharma didn’t send La Dura Dura (5.15c) first, and then guess about the significance of Ondra’s recent coup of sending the
world’s hardest sport climb. We want to comment on Internet news stories’ inaccuracies and spark debate. And then we want to wax philosophically about
“the changing of the guard.”

I mean, I personally wanted to know why Sharma didn’t red-tag La Dura Dura, considering he had bolted, cleaned, and was close to sending what
was to be the coveted World’s Hardest Sport Climb! After all, he’d politely asked Nalle Hukkataival to stay clear of First Round, First Minute (5.15b), and eventually he sent the rig and retained his crown as sport climbing’s baddest mofo.

But the poetry of Sharma’s words above—which he e-mailed me after the news of Ondra’s send had blasted through the fiber optic cables of the Internet
faster than a Japanese train—struck a big, fat, E-major chord, deep within my soul.

Just the day before, Sharma had completed the first ascent of yet another 5.15b, Stoking the Fire. As online editor for Rock and Ice,
I was completely consumed with the news, and along with the rest of the climbing world, immediately began to draw conclusions about what was going
to happen next.

So later that night, I summoned the nerve to e-mail Chris Sharma—someone so mytho-mystical to me, so awe-inspiring, in fact, that he’s not even like
a real person to me—more of a superhero. Even his name has a comic book ring to it … Sharma! Shazam!

The phrase “Dude, you went all Sharma on it!”
has probably come out of the mouth of every climber born post-1984 at least once.

But with hesitation, I typed out the first of many drafts of an e-mail.

Yo Chris! Hell no. He doesn’t even know you!

This is Chris, from Rock and Ice. Shit! We have the same name! It sounds so stupid!

Eventually I settled on a draft and courageously hit send. And like writing a letter to Santa (whoa! Sharma even sounds a little like Santa), I waited
in anticipation, though believing, and almost knowing the whole time that no response was forthcoming.

And then, the very next day, Adam Ondra sent La Dura Dura.

Once again the breaking news enveloped my whole day—writing, revising, researching, posting. But the whole time, somewhere just beneath the surface,
bubbling like a little geyser, were my thoughts about Sharma. How does he feel? A sadness began to develop and I realized that I’d wanted Sharma to
send La Dura Dura. After all, he is the American hero of sport climbing. 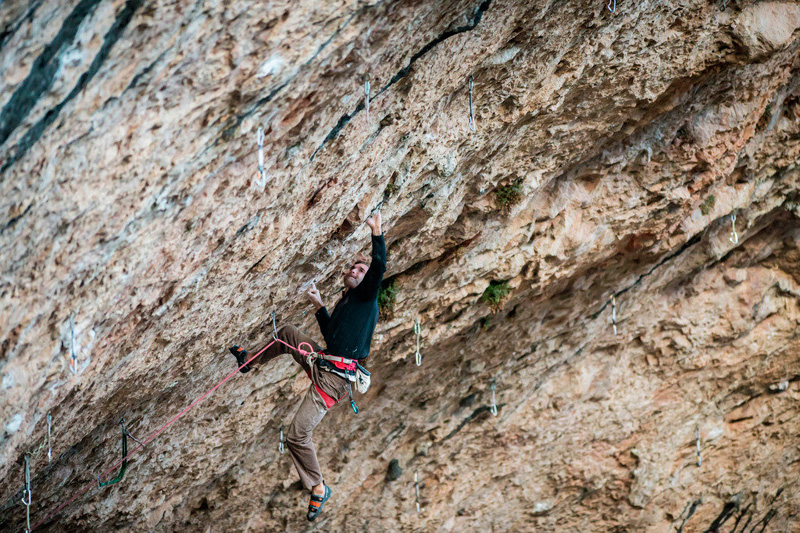 Visual Impact / Rainer Eder“>But
then it came, lighting up my inbox like a glow-worm in the dirt, an e-mail from Chris Sharma.

I’ll just answer below the questions

The answers to my questions were typed out below—directly from the man himself. My hand shook as I double clicked the message.

I quickly skimmed and found what was to me the most interesting question.

“Will you focus on La Dura Dura now?” I had asked, unaware of Ondra’s future send.

“I’m super psyched to keep working on La Dura Dura,” wrote Sharma. “It is so inspiring that Adam sent today!”

I read more of his answers, and began to realize that, in fact, Sharma seemed extremely happy.

On Stoking the Fire, he wrote, “I’m super happy to have done this route!”

I once again studied the exclamation point.

Regarding multiple projects, he wrote, “I work on several projects at once, since it’s a good way of keeping things fresh, staying inspired and not getting
overwhelmed by taking things too seriously.”

So with the help of Sharma’s words, I realized that tomorrow will bring another news story, and another “world’s hardest route.” But most importantly,
I realized that the game we all play—climbing—is supposed to be fun. Even though for some it is a serious business, for the best it is
still just a game that is not to be taken “too seriously.”