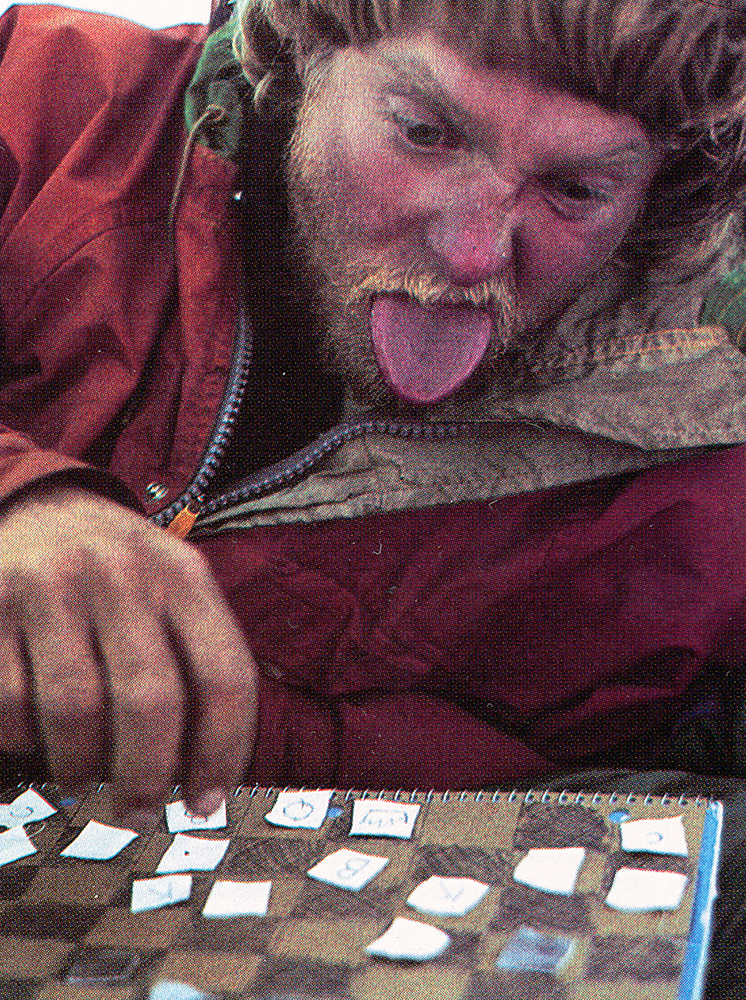 Charlie Porter, one of the most visionary climbers of the last 100 years (my assessment), died
last week, age 63. His passing scarcely riffled the worldwide web pages. Some climbing sites didn’t post anything and those that did resorted to poaching
a scanned copy of an old Rock and Ice interview and/or cut and pasted a few details from the woefully inadequate Wikipedia entry.

This is troubling because it shows that there aren’t many climbers around today who have enough knowledge of Charlie Porter to write about him in an original
way. Even the New York Times, which in 1985 published an article on Porter’s attempt, with Ned Gillette, to become the first to row from Cape Horn to Antarctica via the deadly Drake Passage,
and in 2001 profiled him as a leading climatologist and archaeologist who routinely sailed his 49-foot boat alone, in the name of science,
1,000 miles down to the Cape Horn, ignored his passing (send them a note and perhaps they will work on something).

Arguably—and I will argue if necessary—there is no climber active today who is as prolific, diverse, imaginative and as bold as Charlie Porter
was in his heyday. Yes, there are climbers who do fairly well at one thing or another, soloing El Cap, beating up Grade VII walls, and putting up big
ice and alpine routes, but no one has done them all at the stratospheric standard of Porter. And he did it back when communication from the freezer
box places he visited was scarcely better than a message in a bottle.

In the climbing world, Porter ranks with Royal Robbins, Layton Kor and Jim Bridwell for achievement and audacity. Some of you probably read the short obit I wrote last week and will notice that I repeat myself here, but since no one else is telling the story, I’ll go ahead
and do it twice.

Porter kicked things off in 1972 when he made the first ascent, solo, of Zodiac (VI A4/A5 5.9). In its day, Zodiac was so technically
difficult, steep and continuous with hooking, RURPing, heading and when none of iron junk would fit, free climbing, anyone else would have needed a
time machine just to comprehend the advancement. Consider that at that time the only routes on the entire southeast face of El Cap were the North America Wall (1964)
and Wall of Early Morning Light (1970), epic routes that still give people night sweats, and you get a dim idea of what it was like for Porter
to head up there by himself, and at a time when a homicidal maniac they called the Zodiac Killer was on the loose in the Bay Area, coincidentally murdering
someone every time Porter went up on the wall, which is how the route got its name.

Dispensing with Zodiac, Porter turned his talents to El Cap’s other fabulous and unclimbed stone, knocking off the Shield, Mescalito, Tangerine Trip and
Exalibur, and shoot, I nearly forgot, the first solo and second ascent of Harding’s Wall of Early Morning Light on the Dawn Wall,
which Porter dubbed New Dawn. To give you an idea of just how nails tough Porter was, he accidentally dropped his haul bag low on New Dawn, but instead of rapping off like any normal person, he pressed on, spending nine days and nights, sleeping wrapped up in slings and an Ensolite pad.

After that, Porter probably figured that if he needed more suffering he’d have to go somewhere harsher, and promptly jumped on a 1,600-foot frozen waterfall
in the Canadian Rockies. Up there with the late Bugs McKeith, Porter ticked off a real plum. Even today Polar Circus (WI 5-) is ranked as
among Canada’s finest ice lines and even with fancy curved tools, clip-on crampons, ice screws, shell gear and information, the climb is a serious
outing. 1975 was a different story. Ice tools then were little better than those pick axes that miners chop at the earth with, and it took Porter,
McKeith, and the help of the Burgess Twins, eight days to overcome the monster.

At this point, most people would have retired and opened a sports clothing company or gone off on a drunken bender forever, but what did Porter do? He
headed even further north, up to Baffin Island where a gigantic 40-pitch wall on a peak named after the Viking’s version of heaven, Mount Asgard, awaited.

The details behind his solo of Asgard are many and long and since you can read all there is to know in this rare interview with Porter, I’ll keep to the finer points. He made it after nine days and then had to walk out 10 days without
food, cutting his boots into sandals so his frozen and swollen feet would fit and he could keep stepping forward toward civilization, where the only
waiting nourishment was a bottle of Pepsi.

It wouldn’t seem possible to up the ante, but Porter did just that in 1976 by sprinting, solo, in 36 hours—up the Cassin Ridge on Denali,
a feat that remains one of the greatest individual climbing achievements in North America. It’s worth noting at this point that Porter did all of this
without a GoPro bolted to his forehead, he didn’t Tweet, he didn’t have “sponsored by” tattooed on his forehead and when the American Alpine Club asked
him for details of his Cassin solo he basically kicked them in the crotch. “Porter has given us no details,” reported the AAJ.

Porter’s self-imposed anonymity could explain why there are so few details about one of the greatest adventurers of the 20th century, and why if anyone
knows anything, they think of him as “that guy who put up a few routes on El Cap,” then drifted off to South America to take the temperature of ice. Even
his brother Barnaby Porter says that the family doesn’t know much about his last years. “We know that he lived a hell of a life,” says Barnaby, “but
he lived in such farflung, remote places over the last 35 years that it is difficult to get a firm grasp on.”

Which is probably just the way Charlie Porter wanted it.