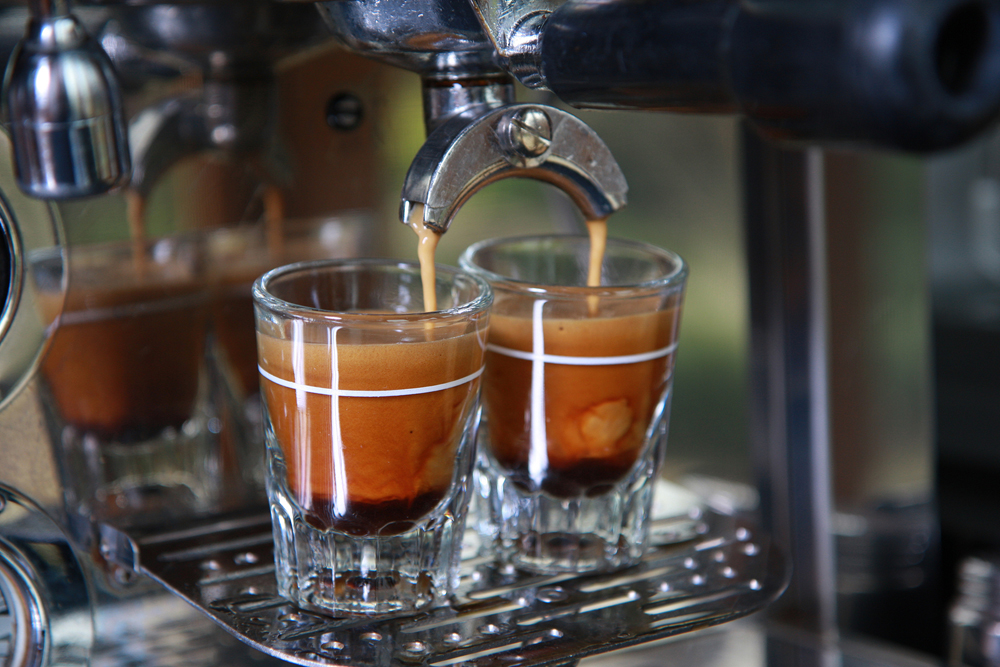 Coffee is nature’s greatest gift. The magical “black water,” as noted by the French writer Balzac who at times drank 50 cups a day, “sets the blood in motion and stimulates the muscles; it accelerates the digestive processes,
chases away sleep, and gives us the capacity to engage a little longer in the exercise of our intellects.”

2.25 billion cups of coffee are drunk each day, making it the second-most valuable traded commodity in the world, edged out only by petroleum.

The effects and benefits of coffee on athletic performance are well known, yet it is one performance-enhancing substance not banned by the World Anti-Doping
Agency. Drinking coffee will make you run harder and faster and longer, and in my stringently scientific research, climb harder and be happier while
doing so. Years ago, before the invention of the chocolate-covered espresso bean, I started each morning at a bivy by eating coffee grounds, and at
times would carry a stove and espresso maker to the crag, both for enjoyment and as a guarantee. It is not far fetched to say that drinking coffee
is as important to your climbing success as dusting your hands with chalk. If I could only have one, I’d choose coffee.

Some people would view the consumption of coffee as unethical, even diabolical. For a time during the Ottoman dynasty the dark bean was judged as the work
of the devil. Drinkers were sewn into sacks and thrown into the Bosphorus river.

I prefer the position of Pope Clement VIII. When pressured by his minions to declare coffee “the bitter invention of Satan,” the Pope tasted a brew and
found it so delicious he proclaimed that, “we shall cheat Satan by baptizing it.”

It was with this background that I recently traveled to the Intag Valley, a cloud forest
in the foothills of Ecuador’s Andes mountains, an enchanting place where a small cooperative produces Arabica beans said to be among the world’s finest.
For me as a coffee drinker, the trip was like discovering the source of the Nile. As a climber, learning the secrets of the mysterious coffee was like
being inducted into the Illuminati.

Getting to the Intag required over two hours of potholed dirt road that switched along the green and often vertiginous slopes, passing innumerable and
spectacular waterfalls and a soccer field.

The drive was fraught with peril. At one point, an earth-mover with tracks the size of baby elephants used its bucket to whack an enormous boulder that
tumbled onto the road. 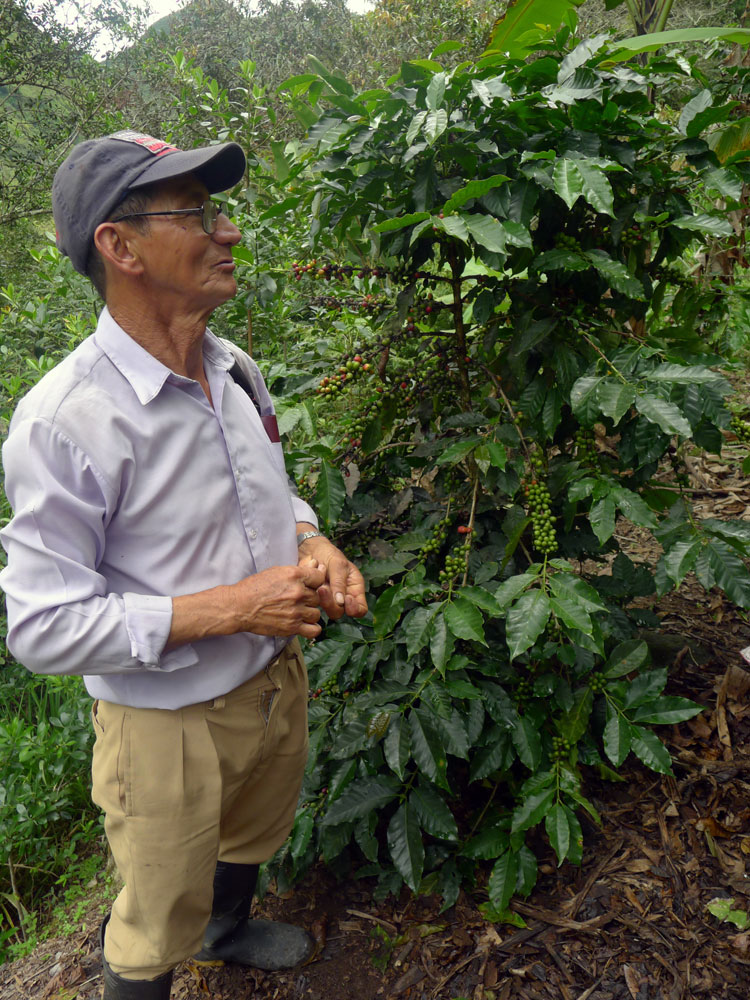 In the valley bottom and after crossing an ancient
swinging footbridge that spans a cauldron they call the Rio Intag, I met Jorge. Ripped with sinew and veins and well tanned by decades under the Equatorial
sun, Jorge could pass for a serious climber. He is instead a serious grower of the coffee bean. Jorge has 2,400 coffee plants tucked in the shade of
avocado, pineapple, mango, papaya and banana trees, and a curious other tree that I’d never seen but whose fruit had the texture of cotton and tasted
like sugar. At 0 degrees latitude the region is exceptionally fertile. Even at 6,000 feet elevation, the Intag’s nearly steady year-round temperature
and the fertile volcanic soil make this one of the most biologically diverse places on earth. Seventeen percent of the world’s plant species and 20
percent of the bird diversity is here. The Intag is also the home to rare and elusive animals such as the spectacled bear, the last indigenous bruin
still alive in South America, and the dwarf deer.

Trees sprung from the steep and muddy slopes and I had to cling my way from tree to tree up the hillside. This was a surprise, as I had imagined a coffee
farm as flatlands, the plants growing in economical rows that could easily be harvested by big machines with forked fingers.

Until I visited Jorge I’d been to different manufacturing outfits and watched awestruck as robotic looms spun ropes, forges heated and stamped aluminum
into carabiners and cobblers painstakingly stitched and glued rock shoes. Each time I’d been impressed by the labor and knowledge that went into producing
the gear, and went home amazed that while we continuously complain about prices, we are fortunate that climbing gear is made at all. I would like to
report that producing a coffee bean requires no less care and expertise and if we had to grow our own plants and process the beans through to coffee,
its cost would equal that of saffron.

Every misty day during harvest season Jorge clings to his slopes, gently clearing the night’s overgrowth of unwanted plants with a sweep of the machete.
Swack!

He examines the coffee plants and picks the red berries one at a time. Since coffee berries don’t all ripen at the same time, he must repeat this task
each day for about three months. How he could even find the plants amid the green tangle is a mystery solved only by years of familiarity. Imagine
all the route beta you have committed to memory and you get an idea of how dialed Jorge has his fields.

To get a coffee plant to even grow, requires Darwinian knowledge. First Jorge must sterilize the ground with boiling water. He then plants a seedling,
nestled as I noted earlier only in the shade because direct sunshine spoils the flavor of the bean. During the dry season he must hand water each plant,
running piping down from a source hidden somewhere up in the clouds. After two or three years of being carefully pruned and nursed the coffee plant
begins producing fruit called cherries. Once these are ripened red and picked, they are fermented in a basin of water. The bad beans float to the top
and are scooped out by Jorge. He next runs them through what looks like an old-fashioned clothes wringer, but one that strips off the outer fruit,
leaving the green coffee beans. These are dried in the shade then sold to Café Rio Intag where the beans are fed into another machine to remove the
the paper-like coating called parchment, then cured, sorted one bean at a time by hand, roasted and bagged. For his part Jorge is paid about $1.50
pound. One coffee plant produces up to one and a half pounds of beans. 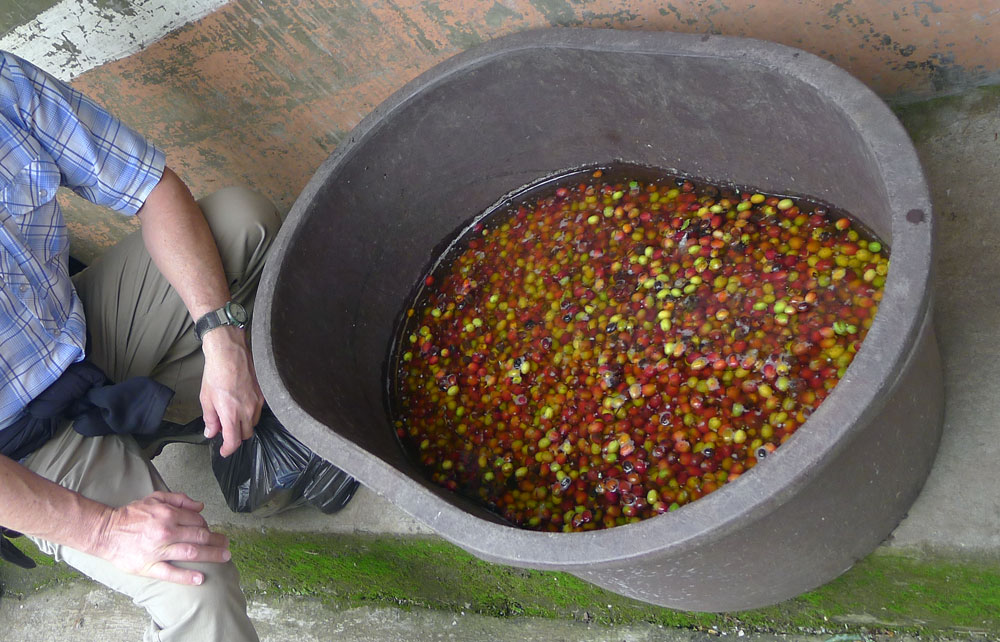 I bought two pounds of green coffee beans from Jorge and bore them quickly back to Colorado. A trip to WalMart produced a popcorn air popper for DIY coffee-bean
roasting. The beans hadn’t been fully processed—the parchment had to be painstakingly picked off each bean by hand before roasting. After 30
minutes of cleaning, my fingers were adequately sore and I had enough beans for one cup of coffee ready for the air popper. The roasting was harder
and messier and smellier than I had pictured and for a moment, probably when the half-roasted beans and burned parchment blew across the kitchen counter
and the room filled briefly with smoke, I questioned the wisdom.

Happy thoughts returned, however, as I tamped the grounds into the espresso maker’s portafilter and hit the on button. I stood mesmerized as double jets
of creamy brown foam spewed from the machine’s nostrils and into my eager cup. It was like watching a dragon snort. The brew was complex, with earthy
notes of Intag’s volcanic dust and a buttery aftertaste. I sank into a leather chair and sipped, eyes pinched shut, and let the coffee do its work.
To paraphrase Balzac, sparks shot up into my brain, ideas quick-marched and memories charged in. I imagined Jorge up there on that Andean hillside,
his knotty fingers lovingly caring for each plant. Giving them names. Almost as if they were routes.