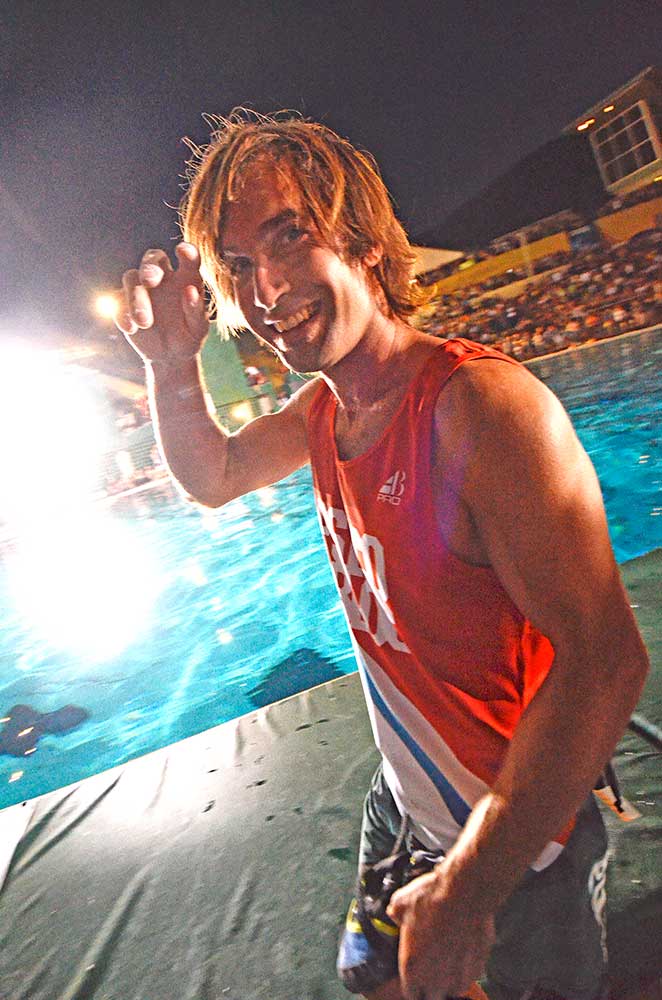 If there is one thing I don’t need to hear again, it’s about how the next big idea in climbing competition is going to “take it to the next level.” This flat statement—uttered
essentially since Harvey T. Carter held climbing’s first organized bouldering competition 50 years ago—lost its kick after the late Patrick Edlinger,
blond locks backlit against the celestial lights, won America’s first real big comp on the concrete walls of Snowbird, 1988. After that decisive
victory, competition climbing was supposed to go mainstream, with televised events, superstars and real money—the “next level.” Love was blind
back then.

Instead, underfunded big comps fizzled like wet dynamite and competitors took their tights and tincture and went underground to stuffy plywood hovels.
The reasons for the failure were as numerous as the ambitions that had hoped otherwise: Lack of organization; not enough media coverage (who wants
to read about a comp?); lack of industry support (despite the millions of dollars shelled out by sponsors); and a format as bland as unsalted mashed
potatoes (agreed).

But somewhere in there, over 20 years, climbing crept up to the next micro level, and the next, and the next. The changes were subtle, like growing a mustache,
and passed unnoticed. There wasn’t a big singular thunderclap event that transformed the game, rather it was an evolution taken in baby steps. Climbing
gyms became sophisticated businesses with real walls. The best climbers were able to eek by on sponsor’s dole and winnings without losing fingers working
summers on oil rigs or fishing trawlers or selling weed. The World Cup got organized and even returned to the U.S. Elementary schools offered climbing
programs.

We did take a shot to the heart this summer when the IOC passed over Sport Climbing as a demonstration event for the summer Olympics, but let’s look in
the mirror: Roped climbing is even less fascinating as a spectator event than baseball, which at least has corking and pine tar, and is now a demo
event for the seventh time. Swing for the bleachers, baseball.

Curiously, Mixed Climbing did get the nod and next year is off to the deep freeze of Sochi, Russia, where it will be a demonstration event in the Winter
Olympic Games. That Mixed Climbing—slamming tools into trash buckets of ice suspended from chains—made it to the Olympics got little fanfare,
but there it is. At The Next Level while Sport Climbing was left behind. I suspect this happened because the Winter Olympics are in Russia, and Ice
Team Russia is ranked number one in the world. But I remain hopeful. Gordon McArthur up in Canada has already build his own Olympic training facility,
a timbered structure to behold that is up there with Noah’s ark, and he will be a real threat.

Two weeks ago I did see the first sport-climbing competition that I would actually have reached into my pocket and paid serious cash money to attend. The
Psicobloc Masters at Park City, Utah, was as spectacular
as the naumachiae, or Sea Battles of the Colosseum. America’s best male and female climbers hucked and lurched, free solo, up a 50-foot-high
overhanging wall and fell not a few feet onto dusty pads, rather they plunged from many stories up into the blue waters of an Olympic-sized
swimming pool. More than one climber emerged from the chilled depths gasping and stunned by the brutal fall. The crowd of nearly 4,000 was also stunned.
Most had never seen such a spectacle, and pulled along by the current, roared in approval, some spilling beer all over themselves, others elbowing
closer to the front for a better look. Beautiful women wandered about languidly caressing pet gazelles and hoping to lock eyes with him, Chris
Sharma. Even the hardened VIPs with the special access wristbands and whisky up in the balcony seemed genuinely happy. Psicobloc felt like a real professional
sporting event. The type we’ve been hoping for since Snowbird.

Psicobloc did have its shortcomings, and these are being bandied about online—mostly by pundits who weren’t there. They say that the climbing was
dangerous (climbing, dangerous?), that they couldn’t understand the format (tip: the person highest on the wall is winning) and that the commentary
was hard to hear (what did you say?) But, Psicobloc is the first child, the next will only get better, and if you were in Park City for the birth on
August 2 you got to witness something special: Climbing going to The Next Level.

Update: Gordon McArthur disagrees with my characterization of Mixed Climbing and sent me a link to this video, to show off real World Class Mixed Climbing. After reviewing the video, I agree that there is more to mixed than aping
around on frozen ice buckets. I hope he brings home a gold. Correction: An earlier version of this article noted that Patrick Edlinger won Snowbird
in 1989. He won in 1988.