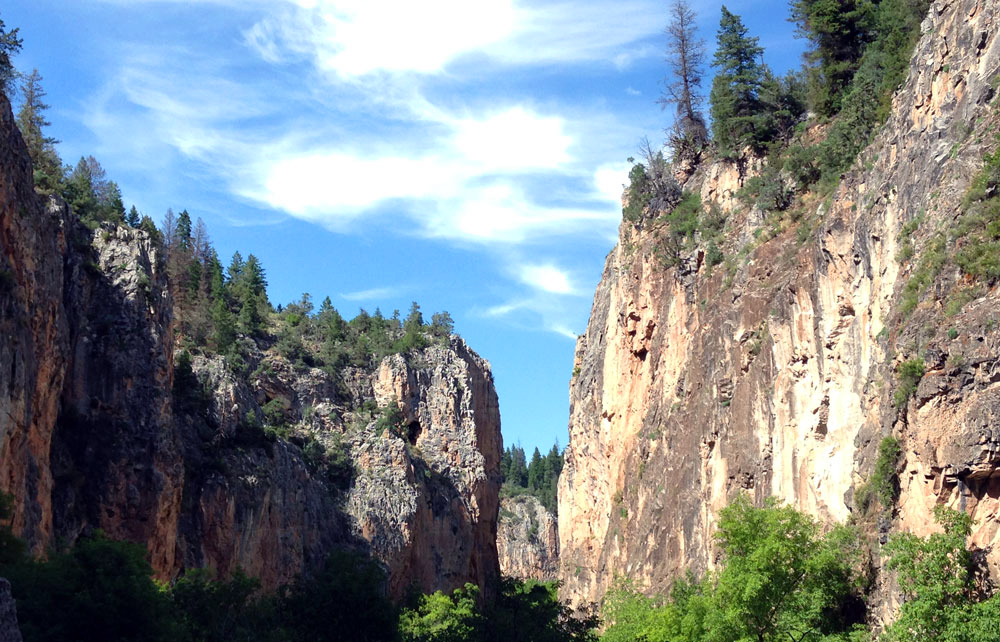 Summer has finally arrived here in the mountains of Colorado and I’m
at a popular climbing area observing the outbreak of life. The trees are sporting leaves the color of limes. So far I’ve seen a bear (or maybe it was
a very large dog, or perhaps a feral hog judging from the nutty scat draped along the trail like Stuckey’s pecan logs), two chipmunks and a box turtle
with somebody’s initials written on the shell in pink fingernail polish. Not a great amount of wildlife, to be sure, but the birds are abundant. Gaudy
red-capped western tanagers frolic in the riparian understory. I’ve picked out the distinctive call of the chickadee dee dee, the robin’s
cheer up, cheereo, cheer up, and the po-ta-to-chip of the goldfinch. By far the most prevalent call, however, is the cry of the Colorado
fussy snivel: it’s hot, it’s hot, it’s toooo hot.

If you’ve ever visited this state during the warmer months you’ve encountered them. They display pale plumage and roost in the shady spots, panting and
fanning themselves with their wings. Their vocalizations are mournful and have been described by one ornithologist as “sounding like a petulant child
cutting an eyetooth.”

To those of us who grew up south of the Mason Dixon, especially that Midwestern climactic hellhole we’ll euphemistically refer to as “Texahoma,” the sight
of these beasts cowering and lamenting in the perfect shady temps of 80 degrees and 12 percent humidity evokes no feelings of pity. A Mexican guy,
also a climber and bird watcher, said that the fussy snivels made him reflect on the bittersweet knowledge that the self must one day die. But as I
watched these strange birds cringing from the sun like fish-bellied golems, I found myself thinking about snakes, and Quartz Mountain, Oklahoma, in
August of 1980.

My first partner, Keith Wright, and I were 16 years old, climbing on the south face of
the tawny 300-foot granite shield. It was about noon and the temperature had been above 100 for a couple of hours already, on its way to a high of
112 degrees. We’d climbed a few pitches and I remember feeling like a baby chick under a heat lamp. One hundred degrees was no big deal. We ran track
in these temps, grinding out quarter-mile intervals on a black tarmac at 3 p.m. As boys we’d ridden our bikes hatless under that same sun, played games
of tackle football, baseball, capture the flag, conducted bb-gun and match-throwing wars, all day, every summer. Sure, some kids occasionally passed
out, but we’d just drag them by the heels and stuff them in the cage with Bandit, Web Brashure’s half-feral raccoon. Why wouldn’t we climb?

By the time we roped up for Moosehead (5.10a), we’d been climbing for four hours in the direct sun, without water, and I was starting to feel
like a day-old cod croquette in a double boiler at the Luby’s cafeteria in nearby Altus. The first symptoms of heat stroke that I discerned were nausea
and dizziness. By the time I clipped the anchors and lowered to the slope I was feeling really wobbly. When my feet touched down, my breakfast—oatmeal,
tortilla chips, picante sauce, a fried peach pie, coffee and a Big Red soda pop—slithered out of my mouth as easy as pulling a greasy string
out of a cat’s ass.

Keith had heat stroke, too. His ears and neck were beet red and his eyes looked devilish—swollen and pink—like some angry god had tipped open
his pupils and filled the whites with Big Red. Keith quickly unclipped and down-soloed the low fifth-class slab to the boulder field where he vomited
an equally diverse breakfast and hid in the shade.

At this point I was way too woozy to downclimb the hundred-foot slab, but I desperately needed to get out of the sun and cool down. It felt like someone
was sawing into my brain with a bicycle sprocket and I briefly considered pitching myself into the talus and ending the piercing headache. Then I remembered
that straight across the slab, not 50 feet away, was the entrance to a cave system—an exfoliation tunnel that led to a granite-floored chamber
just a little bigger than a body-width from top to bottom, extending for a hundred claustrophobic feet. A cool (albeit fetid) breeze was always emanating
from that gap.

I knew there were rattlesnakes in the cave because we used to toss pebbles in there and listen to them snapping their castanets, but only later did I hear
about the snake expert from the Oklahoma zoo who’d examined the tunnels one winter while the serpents were dormant. He’d reported that there were so
many snakes in there that over millennia they’d worn bathtub-like depressions into the granite.

Despite sharing that universal human aversion to poisonous reptiles, I quickly traversed to the cave entrance.
The snakes commenced rattling when I wriggled my feet down the groove, but I really had no choice. I could hear fat bodies sliding across other bodies.
The clatter reverberated off the walls and I found myself thinking about rushing rivers. I let myself slip deeper into the channel until I could feel
the cool stone against my sunburnt nape. The snakes started kicking up dust, but I was past the point of fear. The sun was a skillet and I was popcorn.
I had to cower or die.

The snakes cleared off a few feet, probably because I was putting out so much infernal heat—my boot soles sizzling like the tips of lit cigars—and
I was able to squirm all the way into the cool cave and recover. That day I finally saw the sense in the proscription most Texahomans eventually adopt
and pass on to our children: Never, under any circumstances whatsoever, venture outside into the nuclear heat, dangerous flora and fauna and winds
that blow away towns.

I saw the logic but somehow never got behind the idea that a life can be built around seeking pleasure and avoiding discomfort.
Maybe that’s why the cry of the Colorado fussy snivel elicits no feelings of sympathy, but rather irritates me like a bad case of chiggers. As a climber
I’ve habitually sought the edges, run headlong into discomfort, and there found the gold. These whiny little birds that populate the crags in Colorado
seem never to have learned that the little discomforts (80 degrees! Oh my …) are actually the things that wake you up to the realization that this
life isn’t all about you, that the knee-jerk comfort orientation is what’s dreadfully wrong with this world. Or maybe I’ve just been around too many crying
babies lately.

Come to Colorado and you can judge for yourself. The fussy snivel can be found at every crag in the state. I’ll be there, too, (if it’s not too hot), reminding
myself to heed the call of the robin—cheer up, cheereo, cheer up—trying to remember that I could be shrinking from the Texahoma
sun in a snake den.