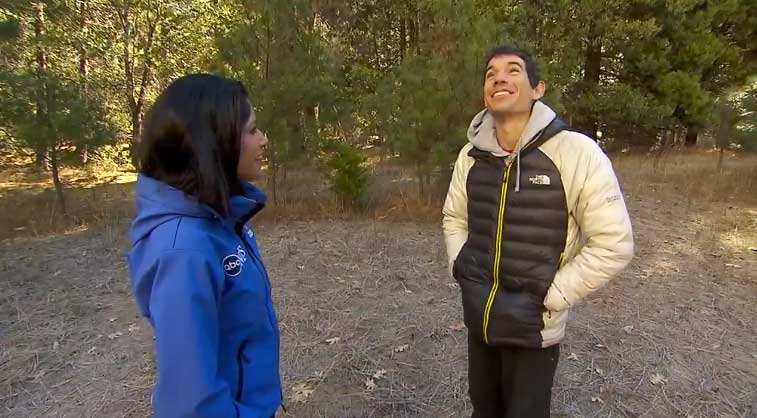 In the past few weeks, the climbing world has erupted like a super-caldera, spilling into the mainstream media from
a phenomenon now known as #Dawnwall. Not to be confused with the Dawn Wall—a 5.14d Grade VI route on the steep, Southeast face
of El Capitan—#Dawnwall is actually something less quantifiable and slightly more perplexing for climbers. Maybe #Dawnwall is best described
as the biggest buzzword climbing has ever known, garnering attention from pretty much every mainstream media outlet in the country. I mean, even the
President of the United States of America publicly congratulated the guys who sent the world’s hardest big-wall free climb. But did Barack Obama actually
know why he was congratulating them? Judging from his Tweet, I seriously doubt it.

“So proud of @TommyCaldwell1 and @KJorgeson for conquering El Cap. ”

And that’s totally cool. I mean, how do you even explain what @TommyCaldwell1 and @KJorgeson did to someone who’s never climbed?

“So that ‘s the hardest anyone has ever climbed?”

“Well, um, 5.15c is actually the hardest anyone has ever climbed … but that’s a single-pitch sport climb and this is, well … ”

“Hold on, can you just tell me, is the Dawn Wall like climbing a pane of glass with little cracks in it?”

Luckily, NPR decided to scrap my interview. And for the most part, mainstream media just decided to stick to their guns and to go with the simple, yet
totally wrong, “First Climbers to Free El Cap.” 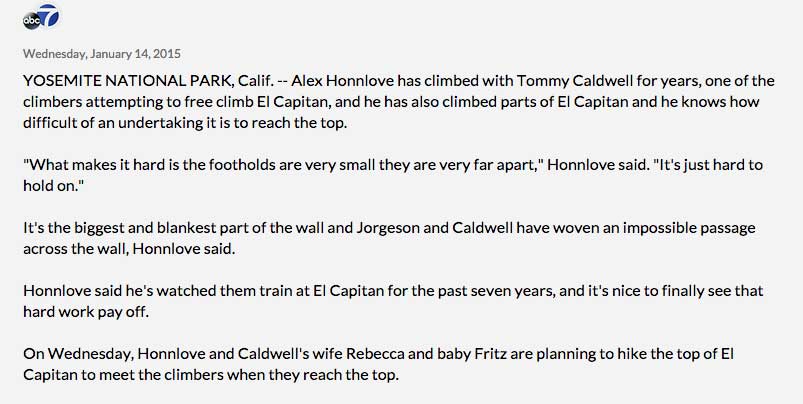 So,
in the end, despite the fact that no experienced climber would ever confuse what Caldwell and Jorgeson did with the first free ascent of El Cap (and
send Todd Skinner rolling in his grave), the mainstream media and non-climbers of the world heard what they wanted to hear. And, honestly, I understand.
Climbing is a microcosmic world of confusing jargon, standards, ethics and grades that mean absolutely nothing to anyone who has never climbed. Ever
tried to explain to your grandmother that you onsighted 5.12a? Well, don’t bother.

So for me, the Dawn Wall was a mind-blowing achievement in big-wall free climbing, while #Dawnwall was a puzzling yet extremely entertaining example
of just how confusing our sport is to the general public.

But within the plethora of botched headlines and climbing faux pas permeating mainstream media, one little gem (See Video Below) stood above the
rest in sheer comedic brilliance. On January 14, ABC ran a video interview titled, Fellow Climber Attests to Difficulty of El Capitan Climb. The interviewee
graciously offering his testimonial was a bold free climber (or is it free soloist?) by the name of Alex Honnlove. That’s right. Honn-Love. There probably
wasn’t a climber alive who watched that interview with a straight face, while Alex Honnold—one of our sport’s baddest free climbers, free soloists
and speedy aid climbers … wait, did I lose you with that last one?—fielded questions like “How does a baby rappel? ”

But what many climbers probably wondered was, Did Honnold tell ABC his name was “Honnlove”?

I caught up with Honnold to once and for all solve the Honnlove mystery.

So, Alex, were you tired of being Honn”old “?

Can Honnlove do anything that Honnold can’t?

Jumar with babies. And slay the ladies. Honnlove should be good at all things related to ladies and babies.

Well, how does a baby rappel?

Fitz [Caldwell’s “25-pound ” son] wound up staying in the meadow with his grandparents. Becca [Caldwell] made the decision that it made more sense for
him to stay down, which was a good decision because we were up there all day and descended in the dark. That would have been rugged for a baby.

Finally, the question we all want to know, did you tell ABC your name was Honnlove?

That was just a horrible botch on their part. The interview started with me saying and spelling my name. I have no idea how they turned that into Honnlove.

Any tips for anyone wanting to feel “Honnloved”?

One only has to ask.