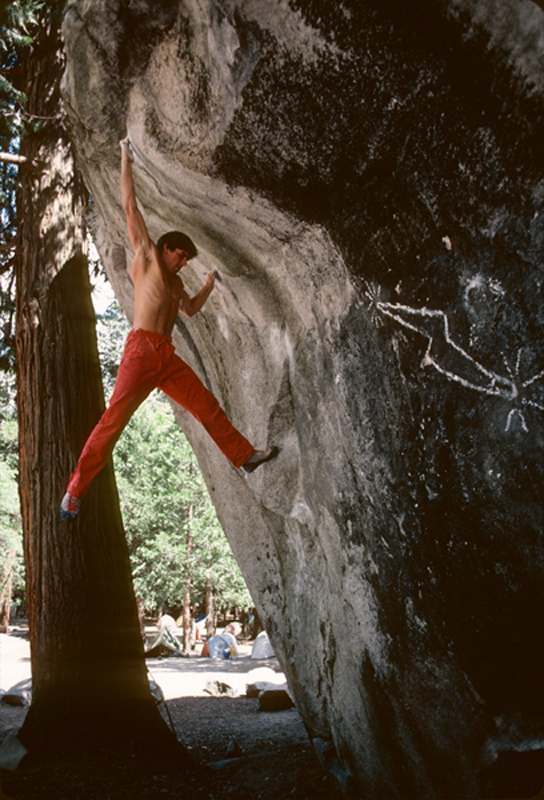 Christian Pondella. “>Kauk
answered the phone and politely let me know he was trying to ride his mountain bike to the Cookie Cliffs for some climbing. “It keeps getting warmer,”
he said in his distinguished Californian drawl, urging me to get to the point. So I asked him about Lucas erasing the bolt, which he said was, “curious.”

“The Rangers at Camp 4 wouldn’t call it graffiti. In fact, there’s a certain respect and the emblem represents a certain time.”

Kauk mentioned he had spoken to Lucas directly about the lightning bolt’s removal, but that “he didn’t make a lot of sense.”

“A lot of times we’re struggling to be somebody,” Kauk said. “James might be a little clever for attention.”

I asked Kauk if he thought the bolt had become a trademark.

“It’s a connection to a time that isn’t trademarkable,” he answered quickly. “It’s so original. The lightning bolt recognizes the spirit of a story we
created. We didn’t need a plaque or anything to remember it by. We already had our lightning bolt.”

Interestingly, Kauk then compared the chalked bolt to “ancient rock art,” saying, “It was our petroglyph and an icon of those times, which to me represents
freedom. We certainly weren’t trying to sell anything.”

Surprised by the comparison, I couldn’t help but juxtapose the famed lightning bolt to say, the horses painted with mineral pigments onto the cave walls
of Lascaux, or the Starry-Eyed Man gracing the syenite porphyry of Hueco Tank’s North Mountain. Was there a difference between Midnight Lightning’s bolt and these ancient pieces of rock art? All three of these images have weathered over time and all three have been historically preserved
and or restored. And as for their connotations, it is us—the viewers—who assign meaning to the images. The images themselves just exist.

Lucas obviously felt that the bolt had become a negative “trademark”, which had in turn distorted its original meaning—to him. But I wondered if
the bolt’s meaning had changed for others who had become a part of Midnight Lightning by repeating the problem.

I chatted with Kurt Smith—the problem’s fourth ascentionist—and
received a similar opinion. “Having climbed the problem with Bachar several times, I have a lot of fun memories surrounding that boulder and the lightning
bolt is part of those memories,” he explained. “It’s a personal historical icon to me.”

Everyone I spoke with felt that the magic was still very much a part of the bolt. So I decided to ask Lucas himself why he felt so strongly about removing
the bolt, and how the drawing had become a trademark. Unfortunately, although he did respond, Lucas refused to be quoted.

Dean Fidelman—original “stonemaster” and photographer—suggested in an e-mail that Bachar had drawn the bolt as a rebellious slap in the face.
“James is part of the now,” wrote Fidelman, “and he wanted to make a statement and give us all a slap in the face. And armed with a toothbrush and
an iPhone [camera] under the cover of darkness, he did so.”

To me, however, creating something from nothing, as Kauk did by climbing Midnight Lightning, or as Bachar did by drawing the bolt, is different
than destroying something that already exists both physically and in the minds of others. Like all art, the bolt itself has no meaning other than what
you bring to it. “It’s just one guy making a declaration that ‘the magic has left the bolt,’” John Long said in a recent phone conversation. “But what
is there to substantiate that claim?”

For Lucas, Midnight Lightning’s bolt is a negative symbol akin to a trademark. But for others, including me, the bolt represents a radical moment
in time, when the impossible was realized like a flash of lightning, and “nothing” became the most iconic boulder problem in the world.