A climber since the age of 16, Bee (now 28) was enjoying a perfect, early fall day climbing the Dakota sandstone boulders of Sailing Hawks, in Durango,
Colorado. Bee began climbing a 15-foot face littered with perfect edges, and felt strong. She battled through the technical crux, which involved crossing
over a large boulder that protruded from the dirt like a shark’s fin. The fin was draped with a crash pad, but Bee didn’t need the precaution. She
flowed through the well-rehearsed sequence and began moving upward, now above a flat landing protected with another pad. Her fatigue, however, was
starting to show, and her partners—three on the ground and one on top of the boulder—shouted encouragement.

The finishing jug, a softball-sized hold perched on the lip of the boulder, was enough to entice Bee to continue, and she fought for the top. Now above
a long drop, she latched the jug … but then she slipped.

“It was a shitty accident, but an amazing day.”

A few weeks ago, I was searching through Youtube, looking for a Weekend Whipper, when
I came across a video titled Bee’s Climbing Accident. As I played the video, I immediately recognized both Bee and the Sailing Hawks boulders, and watched
in horror as she climbed to the top of a beautiful highball, only to plummet from the final moves. Her screams played through my headphones before the
screen went black.

Bee was a coworker of mine from my days spent slinging lattes at a Durango coffee shop. We’d pass the eight hour shifts rapping about our favorite thing—climbing.
But that was pretty much the extent of our relationship, and when I moved we lost touch. Three months ago, however, I ran into her at the Ouray Ice
Festival. Bee, wearing snow pants and a festive cloth lion’s tail, was standing in a full blizzard near the base of Red Mountain Pass, hitchhiking
back to Durango. I noticed was that she was using a cane. We spoke briefly, and I asked about the cane, which she said was the result of a climbing
fall.

After discovering the video of her accident (which she posted on the two-year anniversary of her fall) I felt the need to reconnect with Bee and hear
the whole story.

Bee, who chatted with me after seeing a doctor to schedule her third surgery since the accident, doesn’t really know why she fell.

“I don’t remember how it happened,” she said, “but I’m lucky because I could have hit my head.”

Bee does remember the impact. Her left foot hit the soft foam of the crash pad, but her right foot suffered a “solid impact” with the ground. Her talus
bone was crushed, and she broke her tibia and fibula. Her partners quickly reacted, and using a shoelace to support her leg, “piggy-backed” her down trail.

Because Bee is a perpetually positive person, she convinced herself that her injuries were just a bad sprain. Yet, the pain only got worse.

The next day, Bee visited urgent care, where she was told that her injuries were so severe she needed to see a professional foot surgeon. On that same
day, Bee flew home to Texas, and underwent a surgery that left her with seven screws and two plates in her leg.

Bee’s recovery hasn’t gone smoothly. A year after her first surgery, the screws loosened and she had a second operation. But the pain has never gone away. 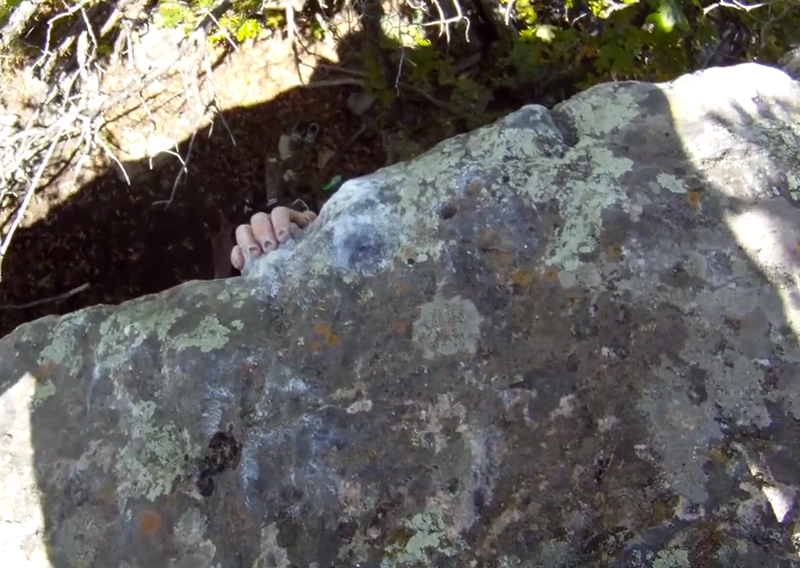 “It
was a shitty accident, but an amazing day,” she said.

When I asked what made that September day amazing, she explained that just before her accident, she had climbed that same highball problem—which
she suspects is about V3—for the first time.

“I was at the peak of my climbing,” she says, “and I had worked on that problem a long time.”

Bee had topped out the boulder, and then decided to add a lower start. With her boyfriend filming from the top of the boulder, Bee went for the line a
second time, and just barely missed the send, taking instead the worst fall of her life.

For Bee, however, the moment she experienced before the accident—topping out a beautiful boulder problem she had put so much work into—had
made that September day one of the “best days in my life.”

“To be honest there’s nothing I would do different,” she told me. “Everything happens for a reason.”

Today, March 25, Bethany “Bee” Morin is going in for her third surgery where she will have all the metal in her leg removed. If the pain does not subside,
and she cannot return to climbing, she will consider below the knee amputation.