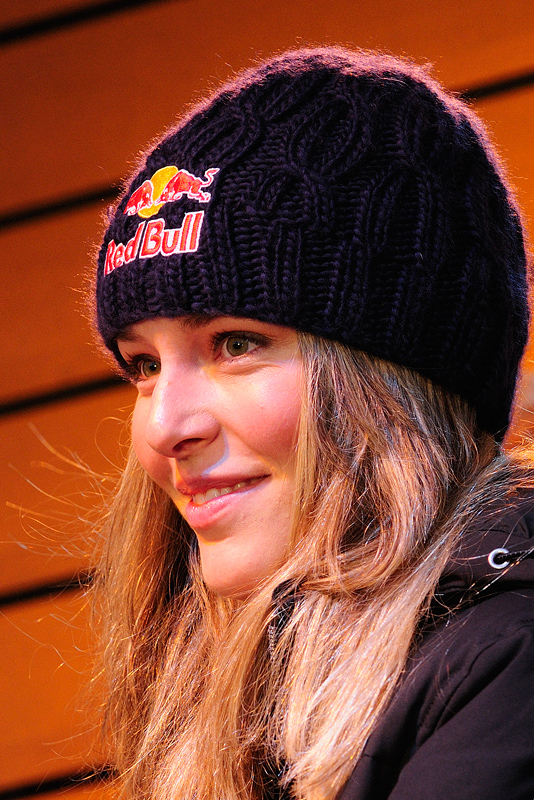 So, Alex Honnold…. ARE you afraid of cellophane?

The question arose on our FB page recently after Chris Parker’s amusing eblast about climbing with Honnold, a premier soloist and a great cragger as well
as endurance climber.

“I tell myself,” a reader, Sam Anderson, posted consolingly, “that the guy is scared of something stupid like cellophane.”

I have been thinking of Alex and other preternaturally unfazed climbers ever since reading a February 8 article about the amygdala hijack effect, in relation
to the four-time World Cup ski champion Lindsey Vonn. On February 5, Vonn, going 50 or 60 mph in the Super G at the Alpine Ski World Championships
in Austria, flew off a jump and overshot the icy ruts of the course, catching a ski in softer snow. She tore her ACL and MCL, ultimately leaving her
with only 12 months between the crash/surgery and the upcoming Sochi Olympics.

If anyone can recover physically, through hard work, it is she. But can she mentally?

In an excellent article in the Washington Post, Sally Jenkins, formerly of Sports Illustrated, pointed out, “It helps if you’re not easily
scared. Vonn has a built-in advantage: She literally appears to handle fear and anxiety better than other people.

“According to Outside Magazine, Vonn likes to show off by driving Vail Pass without braking. When the rest of us do something like that, we’re
likely to suffer what Emotional Intelligence author Daniel Goleman terms ‘amygdala hijack,’ a threat reaction in which an emotional-hormonal
surge takes over our brain, bypassing the cortex where rationality and executive function reign.”

That is about when most of us lose it, overwhelmed. Vonn, however, can circumvent the chemical stream, and, as Jenkins puts it, “hijack it back” to stay
cool.

I’ve seen the video of Vonn’s recent crash, and a 2012 interview in which David Letterman asked her how it felt to get back to skiing again after an awful
one in 2006 (she’s had a few), when she thought she’d broken her back.

Vonn continues to rip down racecourses because she loves it, which is also why Honnold does what he does.

“If you’re not enjoying it,” he told an audience in Aspen recently, “you shouldn’t be out there.”

Living in the region, I heard young teenage males, generally not the most thoughtful of people (trust me), discussing that comment in serious tones. “I
really took that into consideration,” said one.

Still, modern psychiatrists, Sally Jenkins writes, know that from anxiety can spring benefits: “Vonn has attained what Goleman would call high emotional
intelligence. In a way, her quest for speed is an addiction to learning.”

She has mastered self-control, creating a state of heightened awareness and “relaxed alertness” that is prime for athletic feats. 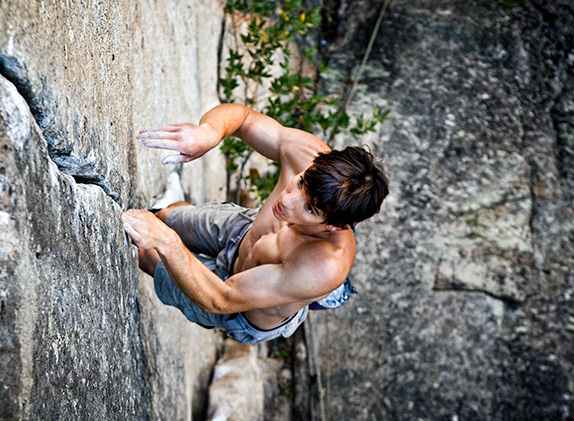 Mikey Schaefer. ” title=”Alex Honnold soloing Cosmic Debris (5.13b). Photo by Mikey Schaefer. “>Yet
aren’t most people afraid of something? Even Indiana Jones is—of snakes. In one of my favorite lines in Raiders of the Lost Ark, Indy
says wearily, “Snakes! Why does it always have to be snakes?”

Chris Parker doesn’t like spiders. I walk across the street to avoid dogs: not nice ones, but German shepherds (and I throw in Rottweilers and a few others)
like the one that bit me in the belly. The MVP of our high-school football team one year, on an outing (a classic teen rite around here) to some secluded
hillside “baby graves,” legacy of an ancient epidemic, heard a noise and, bolting, took out about three other kids.

So I emailed Alex: “Are you afraid of anything, or are you like Lindsey Vonn? Maybe she’s scared of something, but doesn’t seem like it.”

His reply: “As a kid I was always afraid of spiders. I hated spider webs, etc etc. Yesterday Tommy [Caldwell] and I did this fun link-up in Zion, and when I got to one of the belays on the third route there was a small tarantula—pretty sure, it was
a damn big spider—hanging out in the anchor. My first instinct was to knock it off the mountain, but then I thought about it more and rationalized
that they’re harmless, provide a useful role in the ecosystem, and are basically cool animals. I belayed Tommy for probably half an hour with it just
hanging out a few inches from my whole belay setup.”

When Honnold finally climbed away, the spider remained grandly undisturbed.

Honnold continued, “To me that sort of calmness, though not as dramatic as soloing a big wall, let’s say, has been a slowly learned process. It applies
to all things in life and is a constant learning process.”

He is not fearless, he says, nor even close: “But I probably do a better job [than others might] of staying rational or calm in what could be a scary situation.
I don’t know too much about it, just that I’ve gotten better at it with time.”

Last question, then. Does he brake on Vail Pass?

Honnold demurred on that. “I wouldn’t say I do any really crazy driving,” he replied, “though I do like to drive fast. Thankfully [my] van prevents me
from getting too wild or else it would probably just roll over. I don’t think I’m quite the adrenaline seeker that Lindsey Vonn is, though maybe that’s
why I’m not as hardcore.”

The amygdala hijack occurs, according to Emotional Intelligence, when the brain’s thalamus sends stimulus to both the amygdala and neocortex, and the amygdala’s emotional “fight, flight or freeze” response takes over (hijacks) the brain milliseconds before the neocortex can give a rational response. This response is not always distressing, the author observes, giving an example of a man who was walking by a waterway when he spied a girl staring frozen in terror. Absolutely unthinkingly, he jumped into the canal—in jacket and tie—and only then saw, and saved, a toddler in the water.

Have you, in climbing, experienced an amygdala hijack? Ever overcome it?