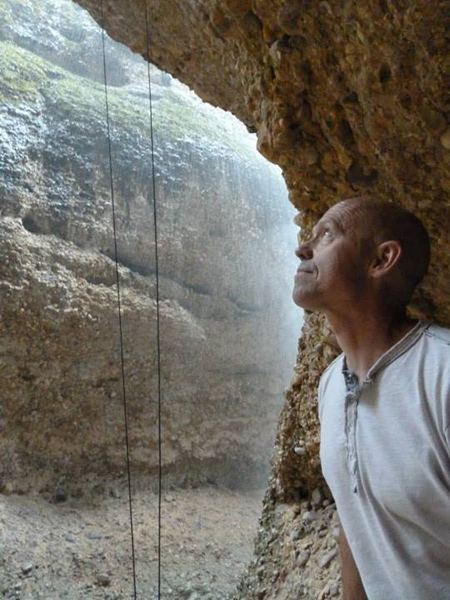 Bill Ohran was one of the first people to start bolting routes in Maple Canyon, Utah, and over many years he’s seen
its corridors fill up a few inches during a rainstorm. Misty Murphy, his wife and another Maple regular, has heard people talk about flash floods in
the area, especially Box Canyon, and has also seen water run through.

“But this,” Murphy says of a recent deluge, “was something else.”

On the last weekend of July, the two, from Gunlock, Utah, joined four friends in Box Canyon, and at first only shrugged when hit by a bit of rain, as had
happened the day before.

“I expected it to pass over,” Murphy recalls. The climbers stowed their gear under an overhang and waited.

“Then it was hailing hard, it hurt, then hailing and raining at the same time, and it was going for a good 20 minutes when you started hearing waterfalls
forming,” she says. “And we said”—she mocks herself—“‘Oh look at that, look at the pretty waterfall.’”

The other climbers—Randy Leavitt, Jeff Pederson, Arash Aalam and Louise Botham—moved deftly up fourth-class terrain to a cave, but Murphy and
Ohran had two dogs, who couldn’t get there.

“Then we started hearing rocks being dislodged above us, [from] all over the canyon,” she says. The cobbles, some large, were washing down from atop the
200-foot cliffs. “Then there were sheets of water and waterfalls everywhere. And eventually water started trickling down like I’ve seen before, a couple
inches deep. We packed our stuff and said, ‘OK, it’s not going to stop, we’ll make a break for it.’

Then she saw a brownish wave: “I can only describe it as a wall of water. I looked up the canyon 100 yards, it was two feet deep and coming at us, and
I didn’t know what was behind that.” 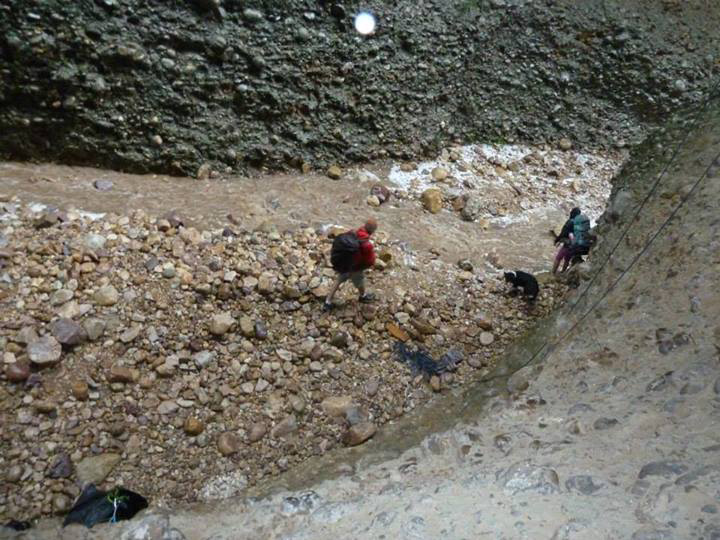 The
two started running. “It caught up and by then it was two or three feet, and I was just running to the mouth of the canyon on cobbles. You can’t see
the cobbles, and with wet shoes and wet dogs”—she laughs—“I can’t believe I didn’t break my ankle.”

She and Ohran reached the mouth of the canyon, and then had to cross another flow of water, coming from the main canyon.

“This thing was five feet,” she says. “It was insane. Anyway, we made it out of there. We were completely soaked and covered in mud.”

Asked what she felt at the time, she says, “I was seriously scared. Water is powerful. I have respect for water. Especially when it’s moving!”

The next day Murphy returned to the site, because she had lost her dog bowl. A few inches of water still moved over the floor. She also saw burned tree
trunks there. They had been loosened in the fire that razed the canyon last year, and washed down from the cliff tops.

About 10 miles from my town of Carbondale, Colorado, is a backcountry climbing area in a sandy wash above Thompson Creek, where a few dozen sport climbs
line a fin of limestone. The approach to the crag, which is known as Lower Thompson Creek, is maybe 20 or 25 minutes on a popular trail alongside the
gently descending creek bed. Around a bend, a right-angle turnoff, easy to miss, gains a loose climbers’ trail upward. The routes appear after a few
minutes’ steep hike up dirt and rocks, and those highest up the gully take five or 10 minutes to reach.

I’ve had my moments in Thompson Creek. Three years ago in this gully I got hit by a boulder knocked off from the other side of that 40- or 50-foot gully,
and if I haven’t told you about it before, I will again, since I point that 80-pound rock out to everyone I ever go there with.

Local climbers are well aware that rain in the area turns the clay-like back road to the trailhead into thick, greasy gumbo, so if showers are due you
either avoid the place or take a 4WD vehicle. But I have to admit the idea of a flash flood never occurred to me.

Until, that is, a day last summer when I started up the climbers’ trail, and couldn’t believe the changed landscape. 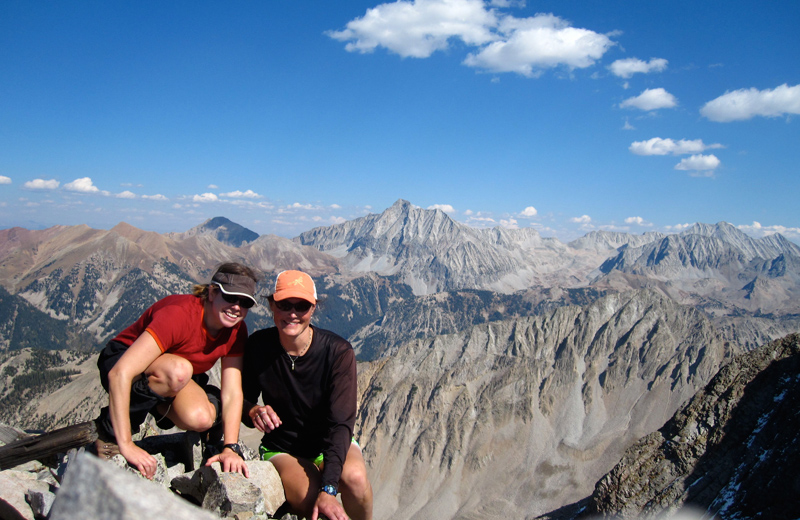 New
trash-can-sized boulders and fallen tree trunks lay across the way. A dark gap, showing layers of strata, had opened up underfoot in one spot. Clumps
of leaves and dried mud braided the pockmarked and graveled corridor. A flood had clearly torn by. The rock that hit me, thick as a sofa pillow, which
formerly just sat on the trail, was now as smoothly embedded as a tile in a garden path. Curious, I asked around a bit in the next few days, and heard
that two friends, Collette Newell and Mary Lewis, had been there when it happened, and had had an “epic” getting out. The two are longtime mountain
athletes, seven-year partners (with four podium finishes among women overall, and a win in women’s age 25-35) in the Grand Traverse, a 40-plus
mile ski-mountaineering race between Crested Butte and Aspen.

The two had been high in the gully (one other party was there as well that day, but situated lower), with Lewis on the wall, when they heard thunder.

“We couldn’t see the storm,” Newell recalls, “but I wasn’t worried, it wasn’t over us and sounded far away. We thought we’d just finish this one climb
and get out.”

They joked about climbing faster, and when rain began sprinkling, said, “OK, time to move on,” and packed up.

“By the time we started down, it started raining quite hard,” Newell continues, “then it started hailing. [The hailstones] were big and they hurt. I put
my coat on, but Mary just had her tank top. We put our helmets on. It was pinging off us.

“It started flooding, rocks were starting to move. Water was rushing by. I’ve never seen anything like that happen so quickly.”

Water flowed to their ankles as the two descended to the creek-side path, and the storm surged right above, thunder booming and echoing off the walls.

“By the time we got on the trail we would step into these big puddles that were over my knees, the ground was so saturated.”

As the two headed out along the ascending trail, boulders released from above them, rolling past. “We would see them coming and run to a safe spot.”

They alternated between stopping to hide under a tree or behind a rock, and hurrying to the next point.

“It was scary, an intense sensory overload of the storm, lightning, water and hail,” Newell says. “Mary and I have been through so much together…
on peaks in Peru and getting lost on skis and touring. But that was one for the memory banks.”

Many climbing areas are vulnerable to effects of rain. Six years ago flash floods killed four Israeli rock climbers (three men and a woman, all in their
20s) in the canyons above the Dead Sea. A YouTube video taken in Escalante, Utah, shows a thundering torrent that developed in six minutes, beginning a
moment after the last person, a guide for a group of climbers/canyoneers, rappelled in its path. This riveting video (see below) from July of last year shows a pounding flood in Spry Canyon on a day, the preface states, when the chance of showers had been given as 50 percent. The two climbers have been off their rappel for three minutes (one of them checked his watch) when it hits. They escape up into an alcove, and watch the swirling waters rise to five or six feet, with the next anchor one to two feet underwater. “I hope those people below are OK,” one worries. An hour later, water is still running.

In the case of a flash flood, the baseline rule is to seek higher ground, and not try to outrun it. In gaining high ground climbers may have both an advantage
(ability) and disadvantage (walls too steep and difficult for a quick escape). Collette Newell says that if the flood had happened any faster, her first
thought would have been to cross to the canyon’s other side, formed of dirt and slabby rock, though that side is problematical for being loose and chossy.

Try to be aware of which areas are sensitive to water threat. Consider escape options.

Nick Wilkes of Zion Adventures, who posted the Spry Canyon video, writes on the company’s blog that weather forecasts may not matter much: “If you are
going into a canyon with questionable, cloud-scattered skies overhead, you’d best be in a canyon where escape is frequently possible. Even in Spry, where
escaping the drainage IS often possible, you can get into deep trouble if you are caught in the wrong spot.”

Another great idea in a storm is to vamoose early.

Here is info on flash floods from weather.com:

You may have only seconds to escape.

If you suspect a flash flood is about to happen, immediately climb to higher ground.

Remember, it does not have to be raining for a flash flood to occur. Some of the most dangerous floods originate many miles away.

If on foot, do not attempt to walk through floodwaters. Instead, turn around and go directly to higher ground.

Make sure to keep children and pets away from floodwaters, storm drains, and sewers.

If you are in a car, drive away from flooded areas. Never try to take a shortcut through them.

If your car stalls, immediately abandon it and climb to higher ground.

If you have any other advice or information, or have had a similar experience, please post away.