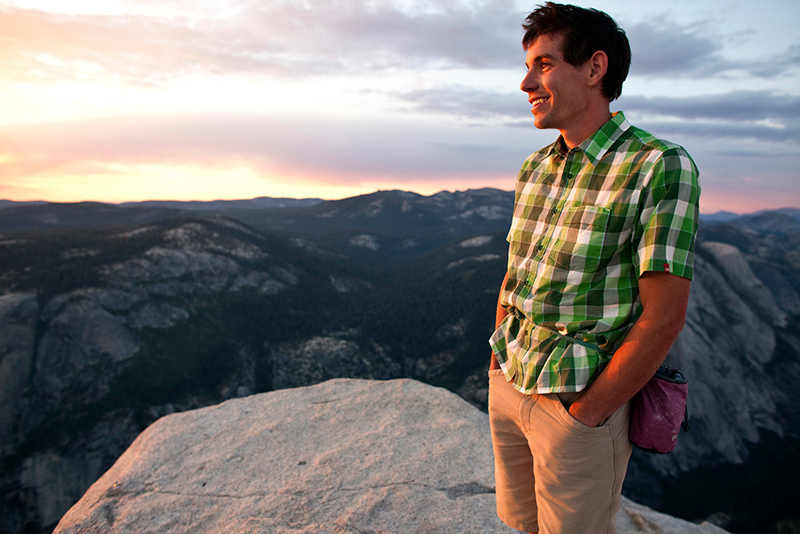 Photo by Tim Kemple. Alex Honnold and I have a secret. That’s right. Alex Honnold—the boldest climber in the world—and I (a nobody) share an intimate secret.

I’ve often wondered what it would be like to go climbing with someone like Honnold. I’ve even found myself daydreaming about sharing a rope with the likes
of, say, Henry Barber in the 1970s (though I actually wasn’t alive then). What would I learn? Would I have had the guts to ask “Hot” Henry about his
mustache? Would I gain insight into the lives of these infallible rock warriors?

This winter, I got to go cragging with none other than Alex Honnold. Though Alex doesn’t have a mustache, they don’t call him Honn-bold for nothing.

I’d never met Alex before, but we did exchange e-mails after he soloed Cosmic Debris (5.13b) and Heaven (5.12) during the same day in
Yosemite. I had contacted him for Rockandice.com, and he had responded professionally, and then followed up with a friendly note, writing:

Hey,
I read your story on your little blog thingy [rockandice.com].

I thought it was surprisingly decent.
-Alex

So when the opportunity arose to climb with Alex this winter, I was stoked. My roommate Chris Kalous (of Enormocast fame), Hayden Kennedy (alpinist extraordinaire),
and I (“blogger”) would take Honnold to The Fortress of Solitude. For Alex and me this would be our first time to post-hole through knee-deep Colorado
powder for an hour and a half to get to base of this mythical cliff. And for both of us, it was probably the last time too.

Once we finally reached the choss pile—Alex post-holing the approach in sneakers—Kalous and I teamed up and took turns climbing to the third
bolt of the crag’s “warm-up” 5.12c/d. Meanwhile, Hayden and Alex moved from one route to the next, Alex hanging the draws and calmly (though not without
complaints about the rock quality) climbing to the chains of every route he tried.

My first impression of Honnold was that he is, in fact, infallible. At the cliff he is all business: “You want me to hang the rope on that?” Okay. Done.

“Hey Alex. Can you onsight this scary, chossy, adventury 5.12 so we can toprope it?” 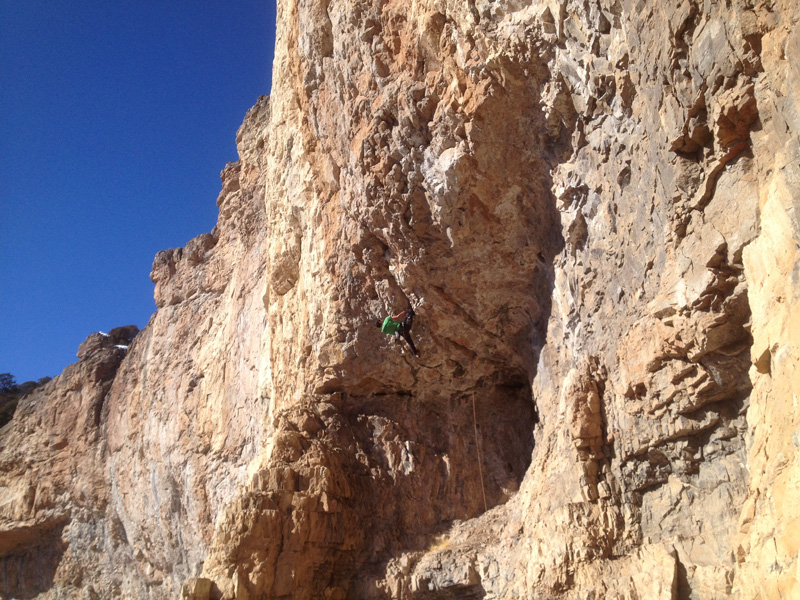 Kalous Logan (5.13). Photo by Chris Kalous. So after a few hours of Honnold firing route after route including a “coveted” onsight of the Kalous Logan—a bolted, poop-filled 5.13 roof-crack—Kalous and I tired of toproping the same 5.12c/d that Alex had graciously put up for us, and we began toying with the idea that the only way Alex would fall was if we actually “laughed” him off a route.

And so the work began. Hayden and Kalous fired numerous jokes from their bottomless quiver, but they just glanced off Honnold’s armor like broken arrows.
Eventually, Alex began crawling up his last pitch of the day, a steep and “loose” 5.13b with absolutely no chalk on it. Honnold’s invincibility begged
for a last ditch attack.

For the record, it was Hayden who began the “game winning” banter. He coolly struck Honnold’s secret weakness with a heat-seeking missile of a topic—a
question everyone has pondered, but few have truthfully answered.

Kalous wasted no time and chimed in with a zinger. But unfortunately, Honnold had just reached a jug rest. He just shook out and casually offered his own
analytical opinion regarding the topic.

However, I stealthily waited in the shadows. And just as Honnold left the rest, and Hayden fed him slack, I notched my arrow. I paused until Honnold was
at the crux, then let fly. And like the soaring arrow of Paris, the laughter struck Honnold’s weak spot, and I looked up to see him at last hanging
on the end of the rope, his hands raised as if to say, “Mercy!”

And what was the joke that pierced Honnold’s Achilles’ heel?

Don’t worry, Alex, your secret is safe with me.