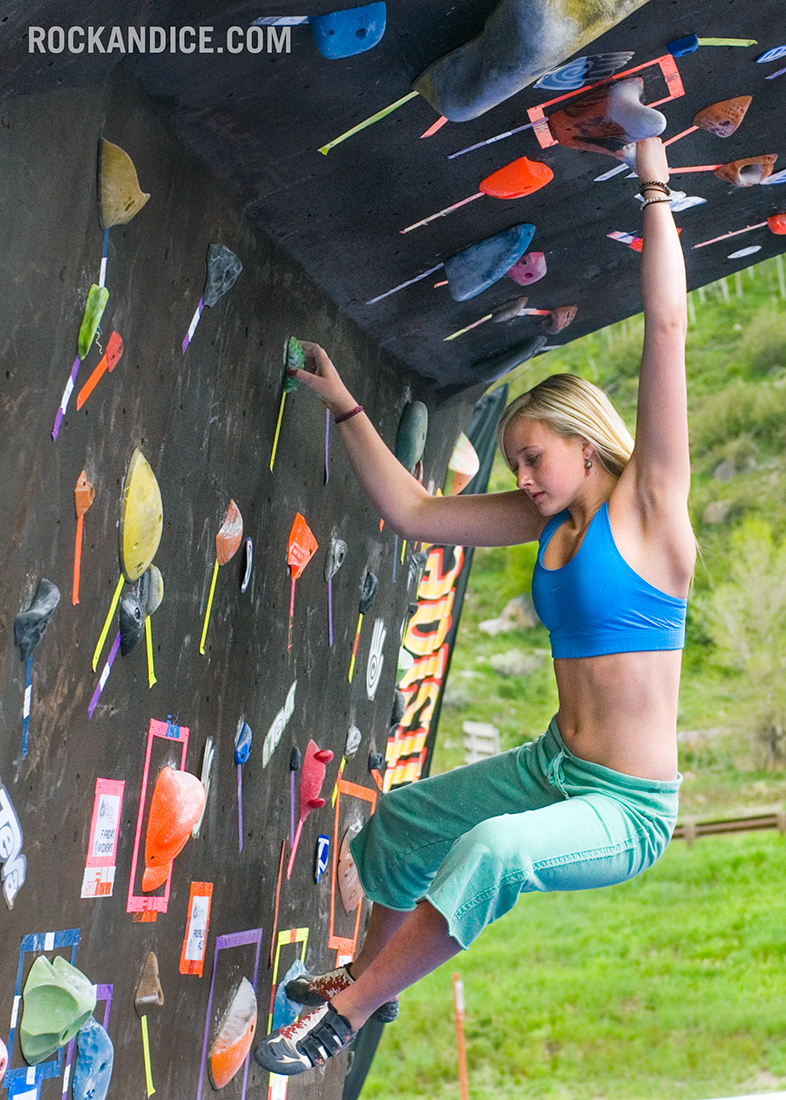 Did you happen to see the latest video featuring Sierra Blair-Coyle?
The one where she sprinkles chalk on her Sanuks and bangs them together to produce a cloud, hangs upside down in a climbing gym and boulders out a
juggy roof at Priest Draw in Flagstaff, Arizona, wearing booty shorts that say “Roxy” on the waistband? Maybe you’re one of the over 2,000 people who
“liked” that video? Or—more interesting to me—maybe you’re one of the many people who were bothered by it and left a derogatory or angry
comment?

Every so often Rock and Ice will post videos or photos of attractive women on our website. Invariably two things will result. First, the post
will generate a huge amount of traffic. Take, for example, the December 19, 2013 “teaser” where several well-known female climbers posed as pin ups for a calendar to promote the organization Climber’s Against Cancer. Even though there was no climbing featured—at all—this post of scantily clad women climbers generated the highest single day of traffic to the site in history (number two was our gallery “ Women of Rock.

The second thing that happens when we post vids or pics of beautiful women is that some people get mad. In response to the video of Sierra, Matt Gentile,
one of the strongest Flagstaff-area climbers (and recently featured in six photos in the feature on Flagstaff in No. 216) commented: “It’s pretty lame
that Rock and Ice magazine considers this a good representation of climbers in Northern Arizona, or anywhere for that matter.” Another commenter,
Johnny Hart, wrote: “And climbing has become all bikini and makeup, oh yay the new fad.”

What’s interesting to me, as an editor, is the dichotomy expressed here. On one hand, a whole lot of people are clearly very interested in this content.
On the other hand, some people consider it “pretty lame.” What should I, as a content manager, take home from this contradictory feedback?

First
of all, to state the obvious, by posting this vid on our website, Rock and Ice is not saying that Sierra Blair-Coyle is a role model or good
representative of the sport, or that all female climbers should wear booty shorts. We put up content all the time that I don’t personally condone.
Take Alex Honnold’s recent solo, for example. Just because we posted the news doesn’t mean we’re encouraging other climbers to climb Sendero Luminoso without a rope. But we do try to provide news, photos and videos of all aspects of the sport that we know our readers find interesting.

Because we monitor our website, we have a very good idea of what people like to click on and the results can be neatly summarized: Sex, death and Everest.
Any post about hot women, somebody dying (or defying death), or the highest mountain on earth will attract a huge number of impressions. I imagine
we’d also get a ton of hits if we could report on a zombie apocalypse, but so far that hasn’t happened. On slow news days, I’ve often wistfully fantasized
about the day when we’ll finally land the news story that combines all four: Hot Women Die and Have Sex on Everest. Until then, we’ll just have to
make do with what we get.

It’s
also worth noting that the comments on the Blair-Coyle video were almost entirely made up of statements about what the poster felt the video represented,
not facts, but opinions brought to the video by the person writing the comment. Take for example Rob Powell’s assertion that Blair-Coyle is: “Just
too direct with her approach to gaining the limelight.” Or Melissa Bennett who asks, “How old is this nearly naked girl?” Or Matt Gentile, again, who
writes: “I know it’s been suggested before, but maybe there really should be a fence built around Phoenix … ” These statements point to an implicit
judgment that Blair-Coyle is seeking the limelight, or too young to dress in booty shorts (she’s 20), or that people from Phoenix are somehow inferior
to people from Flagstaff. To me, this kind of judgmental Internet slander is more offensive than a 20-year-old woman bouldering around in next to nothing.
But that’s just my opinion.

I’d like to point out that 99.9 percent of the news we report, the vids we post, the articles we publish are not about hot women, death or Everest. If
you go to the site or pick up the mag you’ll find in-depth coverage of climbing and not much else, and that’s a reflection of our vision. Sure, we
could focus more on what generates impressions—but at the end of the day Rock and Ice is produced by climbers and climbing is what we’re
stoked on, so that’s what we cover.

How are we doing? I’m interested in hearing your suggestions on content for both rockandice.com and Rock and Ice magazine. If you have ideas about
how we can improve our coverage (or comments about hot women, death and/or Everest), please weigh in below.