When Chris Kalous of the popular Enormocast podcast was asked who’d be his dream interviews, he said, “I’d actually love to talk with some of the ’80s greats: Max Jones and Mark Hudon, for example.”

Next thing you know, someone showed Jones the Kalous interview in Rock and Ice (No. 216), and he picked up the phone and called to say sure. In
fact, Hudon and Jones are climbing again—and they just did the Reticent Wall, an El Capitan testpiece that around 2000 was considered
possibly the world’s hardest big-wall climb.

Like Terray and Lachenal, Messner and Habeler, Skinner and Piana, and the Three Amigos (Graham, Parady, Kinder), Hudon and Jones were a storied partnership, top free climbers of the late 1970s (rather than ’80s). The two met in 1976, and climbed the hardest routes of the era—the eight-pitch Rostrum (making the second free ascent of the last pitch, 5.12b, though not free climbing the route in a go); Astroman (an 11-pitch 5.11); The Phoenix (5.13a) on hexes. They traveled the country to climb all the 5.12 routes they could find. And they looked at the big walls of Yosemite, saw the free-climbing potential, and applied their mantra “Free as can be,” on the Salathé on El Cap; the South Face of Mount Watkins; and the Nose, in
a fast 2.5 days leading and following all pitches. The pair didn’t work routes, simply blasted up with a free rack.

Their articles, the two-part “State of the Art,” co-written for Mountain magazine in 1979, and Hudon’s “Long, Hard and Free,” in Mountain in 1981, influenced a generation.

In “Long, Hard and Free,” Hudon wrote: “El Cap has always been my favorite cliff and free climbing my favorite activity. To be free climbing high up on El Cap, working out new problems, climbing new free pitches, was almost Nirvana.”

Still, they finished the Salathé with Hudon wondering: “By the time we reached the top, we had free climbed all but 300 feet of the route, 100
feet of that only because it was wet. As we packed the bag for its quick trip down, I wonder if we’d done anything at all, had we broken some mental
barriers about free climbing on walls?”

Only those two and Ray Jardine had really tried to free climb those walls, which had only emerged from myth (with topos and fixed anchors appearing) in the mid-1970s. The idea inspired climbers around the world. Nine years passed, though, until Paul Piana and Todd Skinner stepped up and gutted out the first team free ascent of the Salathé (VI 5.13b), in 1988.

Thirty years—more, even—passed before Hudon and Jones climbed together again.

One summer in Wales I saw a Max Jones slide show, in which he charmed a roomful of Brits by saying he was often afraid climbing in the UK: “The ground always seems so close.”

I never realized in how little time Hudon and Jones did so much, until recently reading in a Trip Report on SuperTopo that by 1979, their great flurry, begun three years earlier—when Jones’s Nose partners bailed on him and he turned up at Hudon’s campsite in Camp 4—was over. They
drifted apart.

“I spent a few years climbing, but nothing compared to what I did with Max,” Hudon wrote in the Trip Report, posted in 2011.

Both sampled sport climbing in the 1990s. But Jones was a focused mountain biker, a pro racer and creator of now classic biking routes; while Hudon, after spending 15 days on one redpoint, found himself yearning to climb long routes with gear.

He never again had a partner like Jones, Hudon wrote: “Max was like [a] dream partner—he never got sewing machine leg, never took too long on a pitch, never backed off a pitch, never bitched or moaned or wanted to bail. We both had the same level of commitment and desire, and we got along really well.” 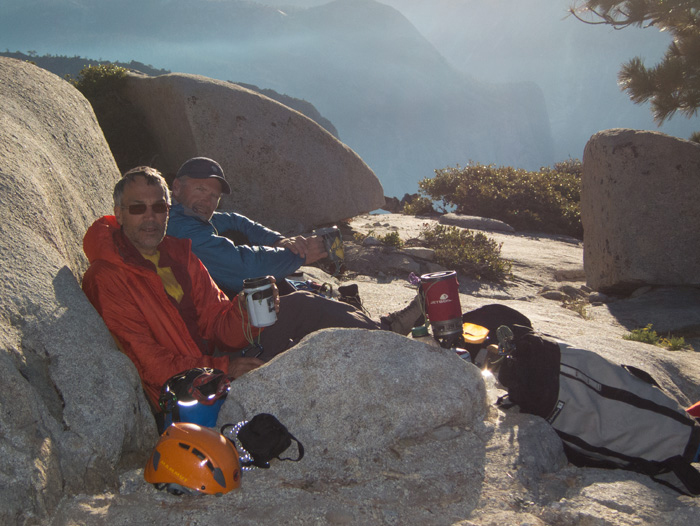 Five years ago, Hudon, of Hood River, Oregon, began climbing in Yosemite again and felt the pull of El Capitan. He called Jones and, after soloing Grape Race(5.9 A2 C3) to Tribal Rite (A4 5.5), began a campaign, sending a barrage of photos and links “heavy with comfortable ledge shots, a hanging stove
brewing coffee, warm sleeping bags and me smiling and having a lot of fun,” Hudon wrote on SuperTopo. “I sent him even more photos after I climbed the Shield.

He told Jones, who lives in Reno, Nevada, to pick any route, that he’d supply all group gear and make him lists of what to bring. As Hudon wrote, “He wouldn’t even have to drive; I’d pick him up on my way to Yosemite.”

For Jones, it was a Rip Van Winkle outing, with a rack completely transformed since he climbed his last El Cap route, in 1979. He’d never used small cams or beaks. Still, he was observant and efficient: thought ahead, made mental goals for pitches and belay changes. Over the nine days, he caught on well.

Rock and Ice checked in with Hudon and Jones.

So … whose big idea was the Reticent?

Jones: I’m thinking it was mine. Mostly because it is such a beautiful section of El Cap. Just being a hard route was secondary.
But Mark and I think a lot alike, so we probably came up with it at the same time.

How did it go?

Hudon: One of my five best experiences on El Cap. We had a great time. Max is a thinker, which is something you need to be to be a good wall climber. … [He] was totally on and figuring it out for himself up there. I was just along for the ride.

From day one, 38 years ago, Max and I worked well as a team. We just simply meshed. We don’t yell and scream on a route, we always know what the other guy is doing. We have the same goals, to have fun and not get into a cluster, and the same level of commitment—we will never retreat.

We had no problems at all [on the Reticent]…. We were both on a biorhythm high, it seemed.

Jones: Maybe easier than we had built it up in our heads. I took a couple of medium-length falls on easier pitches, but the cruxes went really well. [It
was] one of the best experiences of my climbing life.

How much harder was it than your other recent walls?

Jones: Every wall has its scary bits. More, as they say, DFU terrain on Reticent. Atlantic Ocean was scary with all of the expanding/barely attached stuff, and runout, pretty hard face climbing at the top.

Mark, has Max gotten up to speed again? 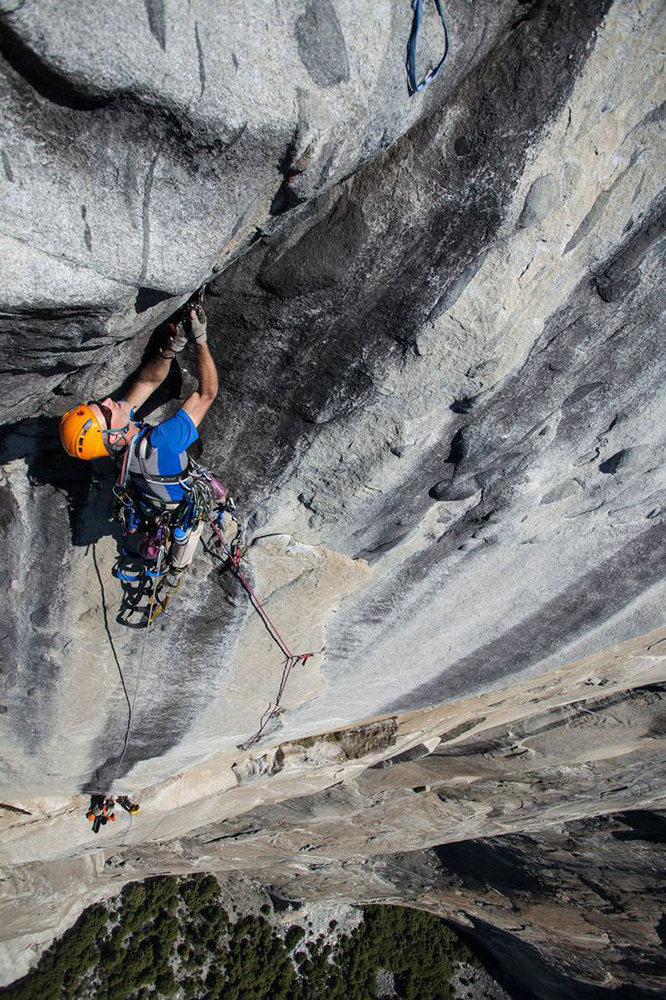 Hudon: Totally. He has his level of safety that he maintains, but he’s fast and efficient about it. He’s not annoyingly safe like some people are

Max, when Mark first pressed, did you resist? Was it the siege tactics that finally got you?

Jones: What got me thinking about it was reading his trip report about his solo of Tribal Rite … [and] listening to his self-interviews. I got a glimpse of what I was missing in climbing. I guess that would be that 1,000-yard stare kind of thing. Not sure how to explain it but I wanted to get there or see if I could again. That first wall, South Seas, was a triumph for me, as I had not touched rock in 16 years. I was fit, but not climbing fit, and the first few days were really hard.

Have you two caught up on all those missing years?

Hudon: Zodiac in a day this fall, Kaos next fall. The Nose in a Day as our 40th anniversary [of their first time climbing theNose] in May of 2016, maybe a free-climbing trip to Colorado for three weeks like we used to do back in the day. We will probably go up on Freeriderone of these days.

Jones: Our goal on future push-style ascents is to beat Cheyne [Lempe’s] solo on those climbs’ times! I am amazed by the kids these days. So cool to see what they are doing. Talked to Dave Allfrey a couple of days before his 7in7, and it was good to see he was actually nervous about it.

Have your roles in the partnership changed?

Jones: Mark is still the go-to guy for the hard stuff, as he has a few— quite a few—more comeback routes under his belt. He is a great teacher and motivator.

In what ways is your approach different now?

Hudon: It was always about climbing cool stuff and having fun. It didn’t matter too much what the route was rated. If it looked cool and fun we did it. It’s that way for us even more now.

We don’t care how long the route takes [or] if some people don’t consider us having done the route, since we hire porters to carry our stuff down. We don’t care what anyone else thinks, we are in it to be up there and have fun …. We both love simply being on El Cap. A typical scene would be us sitting
in our sleeping bags, backs against the wall, looking out at the Valley, the stars, the moon, the sunrise, the sunset, other climbers, not saying a
word.