What is it about Dean Potter that
brings the haters out? Are people still that pissed off about his legal solo of Delicate Arch almost a decade ago?

The Delicate Arch climb was labeled a “publicity stunt” since Potter’s friends filmed the ascent and photos were sent to the Salt Lake Tribune.
That’s when certain people started freaking out, calling Potter names and forecasting the demise of climbing at Arches National Monument, a park that sees roughly 800,000 visitors a year (including 0.2 percent climbers) and has been the scene of several real environmental imbroglios—like the
gouges carved into the top of Owl Rock by rappellers’ ropes.

It’s educational to look at what actually happened to climbing access at Arches following the Delicate Arch solo—nothing. The park explicitly stated
in a press release that any changes they made to the existing climbing policy were not because of Potter’s solo. Yet Potter himself was ostracized
and several of his sponsors dropped him.

Recently, Potter released a video about BASE jumping with his dog, Whisper, and it prompted some of the same wild reactions and name calling. Here’s one of my favorite comments: “Shame on Rock and Ice for simply presenting his foolish actions without any sort of journalistic challenge, and shame on Dean Potter for using his narcissism and dependent pets to further another bid for publicity as his skills and prestige fade and he is surpassed. A silly stunt for Dean and a low-water mark for Rock and Ice.”

A “journalistic” response to BASE jumping with dogs? Really? OK, here goes …

What do I think of Dean BASE jumping with a dog strapped to his back? Well … whatever.

I know Potter and I’ve been keeping up with his climbing, and I know that Dean is one of the boldest, most talented, most visionary athletes on the scene today. You know why you don’t hear much about the far-out, cutting-edge stuff that Potter is doing these days? It’s because he doesn’t really care what you or I think. He just does his “arts”—climbing, slackline and flying—at the highest possible level and mostly keeps quiet about it. He’s still supported by top-level sponsors and works with media like National Geographic. The idea that he released a video about jumping with his dog for publicity purposes is … well … silly.

What do I think about him BASE jumping, BASE lining and BASE soloing? I think that’s all bat-shit crazy. But, full disclosure, I can think of several other things that are even crazier, like the open-carry movement, adventure races and licking poisonous frogs.

What do I think of Dean BASE jumping with a dog strapped to his back? Well … whatever.

One of the most famous Zen koans—those mind-twister riddles that are meant to shatter your habitual dualistic perception of reality and prompt the experience of oneness—is: “Does a dog have the Buddha nature?”

One reason this is a good koan is that we really don’t know what dogs think and perceive. We can watch their reactions and hypothesize about their experience and feelings, but do we really know?

Take my dog, Badger, for example. Badge is a seven-year-old longhaired Jack Russell terrier. We got him a few months before our first kid was born and he was still a puppy when my mother-in-law, Deborah, moved into our two-bedroom house with her wolf/dog hybrid named Aila. Kai was born at the end of May and Deborah stayed with us for the next seven months. (Yes, you read that correctly, my mother-in-law stayed with us for seven months).

Among other things, this meant that Badger was literally raised by a wolf. Perhaps that explains some things. Like why he will only take so much growling, snapping, bullying or “herding behavior” from other dogs before launching into a full-scale, mini-white-tornado, fuzz-flying attack. Despite weighing less than 20 pounds, Badger has successfully taken down an Akita and a German Shepard, both of which had it coming.

What is Badger thinking when he attacks these dogs famed for their ferocity and weigh at least three times as much as him? Hell if I know.

One charming thing that Badger does is “spot” our boys. When they were learning to crawl up stairs he would position himself on the step below and turn sideways, like a prop. Is that because he loves the kids? I guess.

I don’t take Badger BASE jumping, but I do take him climbing, and, because of where I sometimes go, Badger has had some very close calls. For brevity’s
sake, I’ll just relate one of Badger’s brushes with death. 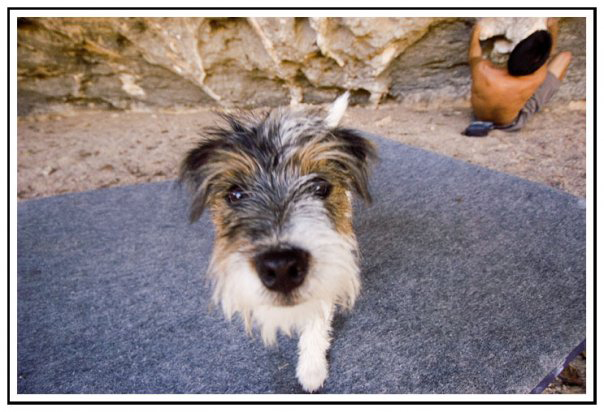 It was a couple of years ago and I was climbing at a new area, accessed by scrambling up a wicked loose and steep gully. Toward the top of the ravine, the granite walls narrowed to a bottleneck, only about as wide as my outstretched arms. This section was so steep that I had to get on all fours and burl upward, churning through the loose scree, sending granite shards cascading down the chute for hundreds of feet. As usual, Badger plowed ahead without much trouble—he’s climbed up to 5.7, maybe harder.

When I got to the top of the gully I spotted a granite slab about the size and shape of a Ford Ranger pickup leaning against one of the canyon walls. I
scrambled to the top of the slab and stood there, scoping the opposite wall for potential routes. After a few minutes, a thought troubled my conscience:
I wonder if this huge granite rock I’m standing on is solid?

I lightly stamped my foot on the ledge and just like that, the massive chunk started sliding down the gully like a colossal five-ton rock sled—and
there, running willy-nilly down the gully in front of the projectile, was Badger.

I jumped off behind the block and slid down the steep slope on my butt, screaming, “Badger, Badger, Badger!” The noise of the rockslide was like a hurricane and the dust boiled up in an angry black cloud. It really was like an action sequence in a thriller movie—one of those scenes where the tanker truck skids toward the camera, sparks flying, brakes screaming, smoke billowing.

I watched as the block shot into the bottleneck and I realized sadly that Badger was surely nothing more than fuzzy white fur and raspberry terrier jelly stuck to the bottom of the granite slab. How was I going to explain this to Hannah and the boys?

Then a white fuzzball appeared in the dust cloud. Badger must have sensed that the block was overtaking him and used his momentum to drive up one sheer wall and dive backward over the block. He looked like a stunt dog, front legs outstretched, high in the dirt storm, beard pasted to his face with the speed of his leap, even as the deadly sled zipped under him, slipped into the gap and careened down the ravine.

Badger dug up the hill and leapt into my arms.

“Good dog!” I shouted, thinking: Holy shit, that was close.

I know, I know—bad dog papa!

Especially compared to Dean Potter who puts Whisper in a Ruff Wear dog harness whenever she’s in “hazardous terrain.” Potter says he even buckles Whisper in while driving.

What about you? Do you put a seat belt on your dog? No? Shame on you!

I may not know what dogs think, but I know that Badger never hesitates to jump into the truck when it’s time to go climbing—even after his near-death experiences. By the same token, I might think Potter is crazy for BASE jumping, but I also believe he’s a great friend and companion to Whisper, with her best interests always at the forefront of his mad mind—just as I try to be a good papa to my little dog. Maybe, instead of dissing him for
taking risks, we can learn something from Dean about how to live amid the inevitable rockslides of this world? Maybe we can even celebrate him for
his approach?