In 1909, Prince Luigi Amedeo, an Italian Duke with a penchant for exploration, led the first major expedition to K2, the world’s second highest mountain and still arguably the hardest
8,000-meter peak to climb. One hundred years later, in 2009, director Dave Ohlson set out to document that year’s attempts on K2. Since its premier
at Mountainfilm in Telluride in 2013, his film, K2, Siren of the Himalayas, has taken home a passel of film festival awards including the
Grand Prize at the Torello Mountain Film Festival in Spain and the Golden Spiffy at the Spokane International Film Festival. It should be required
viewing for any climber interested in high-altitude mountaineering.

Ohlson intercuts footage and stills shot by Vittorio Sella in 1909 with the unfolding drama of the 2009 expedition. The result is a stunning collection
of scenic vistas and a sobering gut-check on the reality of climbing K2. The take-home point is that, despite 100 years of exploration, this mountain
is a still the apotheosis of difficulty. The question tacitly raised by this film, which shows the first concerted effort to guide K2, is whether K2
will remain inviolate. It certainly was still the “reigning sovereign” in 2009, but with the increased use of badass high-altitude porters and O2,
it seems the mountain has already changed dramatically—in 2012, for example, 28 climbers summited K2 on July 31.

Ohlson’s film follows the efforts of Gerlinde Kaltenbrunner (who, in 2011, would become the first woman to climb all 14 8,000-meter peaks without supplemental
oxygen or high-altitude porters), Jake Meyer (the youngest Brit to climb the seven summits), and Fabrizio Zangrilli, an American guide leading an expedition.

Kaltenbrunner is almost superhuman in her energy and positive attitude. She comes across as patient, humble and seemingly indefatigable. Early in the film
she says, “It was my big dream to go to the Karakoram just to see K2. I didn’t dream about climbing K2. It was such a huge mountain.” But by 2009 she’s
not only raring to climb the peak, but is probably the strongest climber on the mountain—breaking trail, fixing rope and tents, and enduring
the most inhospitable weather on earth with an open, almost elven smile. 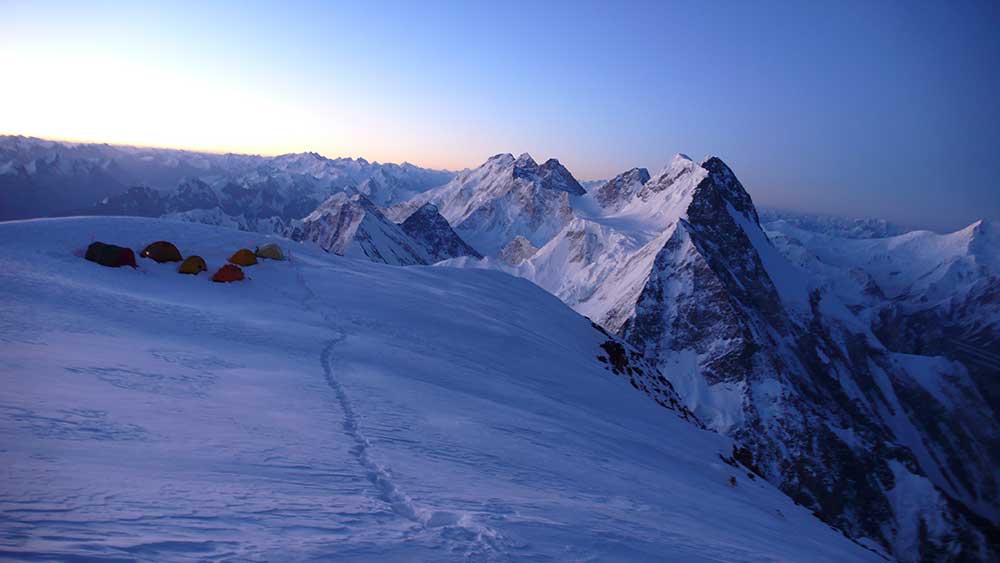 Meyer is also upbeat, but he’s out of his element. In the wake of the 2008 tragedy, where
11 climbers were killed when a serac broke off above the Bottleneck, and the death of a skier, Michele Fait, early in the 2009 expedition, it comes
as no surprise when Meyer throws in the towel. An ascent of Everest with O2 has clearly not prepared him for the Savage Mountain.

In fact, as K2 guide Chris Szymiec points out, “Everest and K2 aren’t even the same sport.” This is a point a couple of statistics make abundantly clear.
First, there’s the startling death-to-summit ratio, which is 25 percent on K2 as opposed to Everest, which is only 5 percent and falling. Then there’s
the cold fact that K2 is still damn hard to climb, with only 302 total ascents as of 2009. Everest had 843 summits in 2009 alone. Guess how many people
climbed K2 that year? Well, you’ll have to see the film to find out.

Kaltenbrunner and Meyer represent two sides of the spectrum of climbers attempting K2, but it’s Zangrilli who steals the show. He comes across as tough
and professional with a wry sense of humor. (At one point he drolly tells his clients and expedition mates that the movie Vertical Limit was
a documentary and they need to pick up the explosives.) He also comes across as completely obsessed with the mountain. The 2009 expedition would be
his fifth, with zero summits. 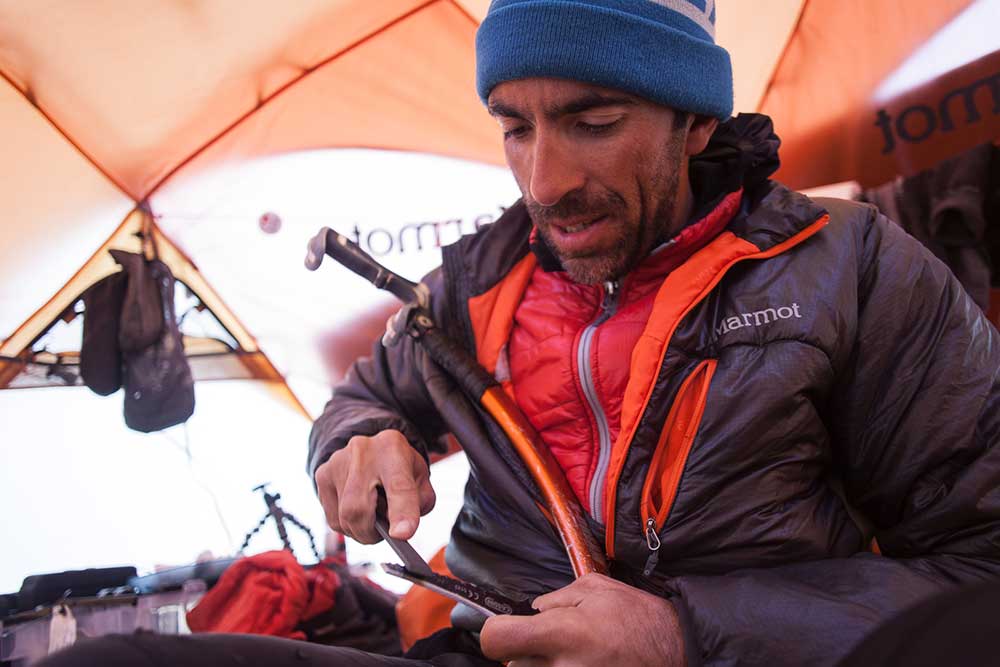 Zangrilli
is a consummate alpinist. On his first expedition to K2 in 2000 he and his partner pioneered a new route to the Shoulder. But on a “perfect summit
day” he came across the high-altitude porter Mohammed Ali Junjoba slumped in the snow at 8,350 meters. Just 250 meters from the summit, Zangrilli turned
around and spent the next four days getting Ali Junjoba down.

In K2, Siren of the Himalayas, Zangrilli offers some compelling commentary like saying that “the element of danger in alpinism is 100 percent
part of the game. As soon as you eliminate the danger, you have just every other sport.” In 50 mph winds and blowing snow at 7,000 meters he’s “lovin’
it. Absolutely lovin’ it.”

Yet the most interesting moment in the film comes when Zangrilli is within spitting distance of the summit. The sun is rising and illuminating the most
beautiful range in the world. Masherbrum and Broad Peak are lit with alpenglow and it’s, once again, a perfect summit day.

Zangrilli is considering whether to push on—whether to go for the summit of his dream mountain, the one on which he’s spent nearly a full year of
his life at this point.

It’s a moment of truth and one that so many like Zangrilli have faced. Over 30 mountaineers have died on K2, most on the descent.

“We have to come back safe,” Kaltenbrunner says at one point. “That is the highest priority, of course.”

I won’t give away the outcome, but suffice it to say that Zangrilli does come back safe. I caught up with him in Aspen, Colorado, where he’s working for
Aspen Expeditions, about to head into the Rocky Mountains for the Labor Day weekend. He was kind enough to answer a few questions about the film and
K2.

1) In the film, K2 and Everest are described as different sports. Can you elaborate a bit on the difference?

On Everest if you want to climb a hard route, you always know that if you make it to the top you have a fixed route down that is solid. The infrastructure
put in place by the large sherpa teams is amazing. On K2 if the teams work well together (pre-2012) then you have a chance of having a safety net back
down. These days, I must say it is the norm to bring a large number of sherpas from Nepal. They bring the Everest mentality to the mountain—a
bit less sporty. It is yielding a ton of success now. So perhaps the tide has changed on the Pakistani side of the mountain, especially after this
unprecedented season. The weather was so good, and there was a ton of fixing done. I’ve been contacted a ton since the end of the season asking for
guiding quotes. It’s very competitive now. Rumors of the larger commercial Everest companies going to K2 next summer are rampant.

2) What is the climbing like on K2 outside of the obviously very significant altitude? In other words, is it steep, technical? What are the cruxes like? Can you compare the climbing to other peaks our readers might be familiar with? 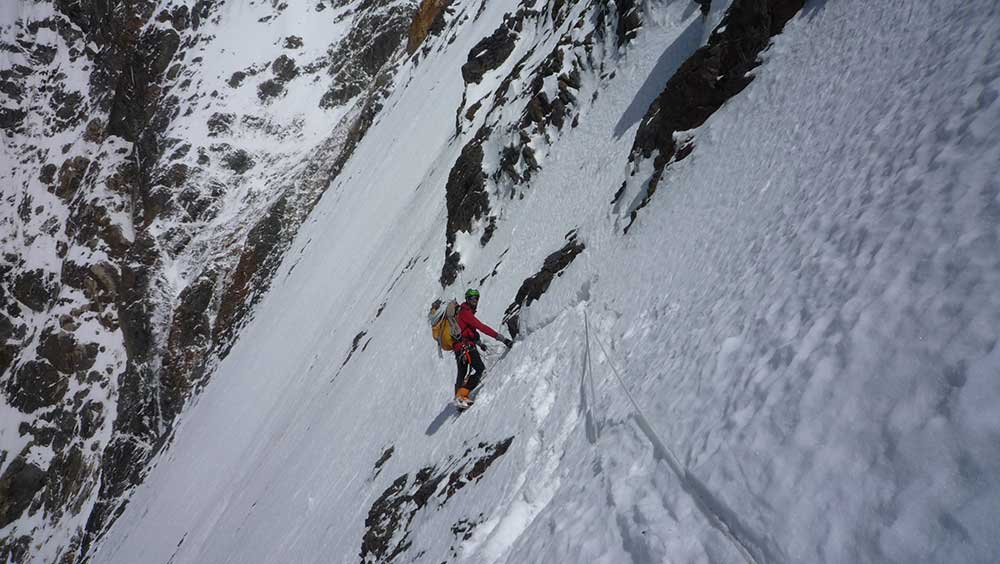 On
both the Basque Spur (incorrectly called the Cesen in the film) and the Abruzzi, the cruxes are balancy M5. They aren’t hard, but add a bit of altitude
(both are at around 23,000 feet), wind and the fact that you are not acclimatized—it’s the leader’s first time up—then it gets a bit serious.
In all the times I fixed those sections I never had a dynamic rope, and the rock is pretty fractured so it become very serious, very quick. Falling
is not a good idea. The majority of both routes are 35- to 55-degree snow interspersed with rock steps. Old fixed ropes and ladders on House’s Chimney
show the way easily.

3) We see a lot of fixed ropes and tents in the film. How do the ropes and tents get up there? It’s said that Gerlinde doesn’t use high-altitude porters (HAP). How significant is that? How important is “style” on peaks like K2 (or Everest)?

On K2 a climber, or Balti, Hunza or Sherpa fixing team has to lead and place the fixed ropes. Same with the tents. I fixed a ton of what you see in the
film and it’s kinda back-breaking work. The past few seasons, large fixing teams from Everest have come to K2 and they get it done much more easily
and quicker. More money, more O2, make things a lot easier. Gerlinde’s style of not climbing with HAP support is great, makes everything fair in the
mountains. It is important in order to differentiate between sport and just a hobby. Skill, thought, strategy and a great amount of physical and mental
fitness are required for that sort of thing.

4) You’ve spent a significant portion of your life on K2. What’s the allure? 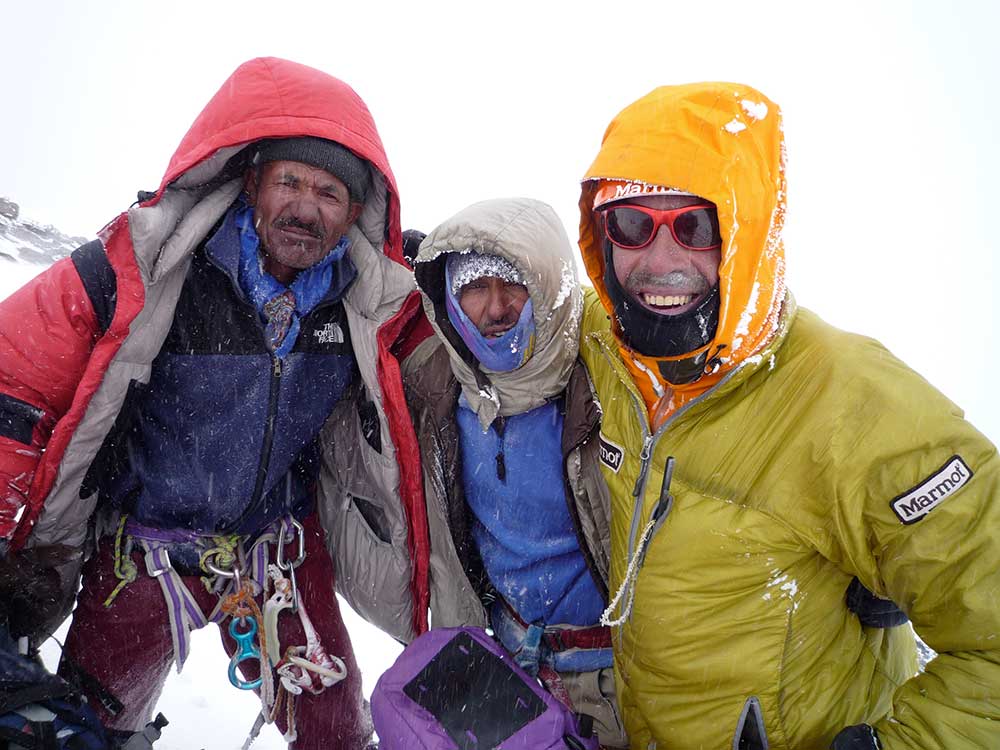 It
was a great proving ground. The Everest market was flooded. I’d guided the usual mountains like Cho Oyu, Ama Dablam, Makalu, etc. and thought in order
to differentiate myself from the masses it was a great place to be, given there were not a lot of people choosing it as a work environment pre-2012.
I must say the Karakoram is one of the most beautiful places on earth, like Patagonia or the Ruth Gorge on steroids. The winds and landscape are so
harsh. The lack of inhabitants and culture for five days walk add to the remoteness. Just a cool place.

5) What is it like taking a commercial team to K2 and also taking care of a film crew?

Well the obvious answer is, it’s a ton of work! The art of guiding at high altitude is precision. Stick to the rules that make sense when sitting down
to dinner with your wife and don’t stray from them when you’re at 8,000 meters. The mountains have order and rules and if you play by them, things
are usually safe. Film crews have their own agenda, so they are just like herding cats. I loved it.

6) Have you been back? What does the future hold in regards to climbing and climbing goals for you?

I have been back in a small team to try something fun. I am still guiding in the big mountains and in the Aspen area. I am off to the Canadian Rockies
and to Patagonia this year to do some fun alpine climbing. A big component to keeping the mountains fun is pursuing personal trips. I am ski guiding
a lot these days as well. I am only guiding small groups, and I’ve been lucky in that it has kept me away from the busy mountains as of late, which
I like.

For info on screenings near you, go to: firstrunfeatures.com/k2_playdates

K2, Siren of the Himalayas will be available on VOD and DVD starting November 18.