Editor’s Note:  Jim Bridwell died on February 16, 2018. To read an obituary by Rock and Ice’s Editor-in-Chief and longtime friend of the Bird, click here.

“Is that Jim Bridwell!?” asked Chris.

We were enjoying pepper steaks at The Outlaw, a watering hole in Ouray that had once served John Wayne, who had apparently tipped back one too many for he left without his hat—it still hangs on a nail over the bar.

It was early January and the annual Ice Festival was in full swing. The Outlaw teemed with ice climbers decked out in enough GoreTex to stock every Sports Authority west of the Rockies. Many warriors proudly bore the Schmiss, or facial wound, the mark of a brave duel with the ice.

“Bridwell is much older,” I said to Chris. “Besides, The Bird is holed up in a trailer park in Palm Desert.”

I knew this because I had recently chatted with Bridwell, who from his SoCal hideaway had remarked that there they have two seasons: “Winter and hell.”

No, Bridwell couldn’t be at the Ice Festival.

“You don’t believe in God,” said Bridwell. “No one who ever did anything ever does.”

This wasn’t a question, rather a statement and before I could address the issue of an all-knowing deity, Bridwell held forth a copy of The Urantia Book, a spiritual tome that weaves religion, philosophy and science into a Bible of sorts. Central to the teachings of The Urantia Book is the idea that human moral decisions are guided by a “Thought Adjuster,” a fragment of the eternal spirit of God given to each of us when we make our first moral
decision, said to be somewhere around the age of five years and 10 months.

The Urantia also teaches that there were once races of blue and green people. This seems far-fetched until you consider that quite a few scientists
believe that dinosaurs had feathers—why can’t people be blue?

The evening had shifted from the Outlaw to a gathering at the Ouray Community Center. Folding tables had been set up so festival sponsors could show off their gadgets to the 3,000-odd climbers forking down $20 for an all-you-can-eat spaghetti buffet, a Festival highlight.

Bridwell, beer in hand and looking like Father Time, his face etched with more fissures than his Sea of Dreams or even Geek Tower, was roosting at the Rock and Ice table. He was in hot demand, fielding questions and signing autographs from lads brave enough to approach climbing’s version of Merlin/Keith Richards.

Now pushing 70, Bridwell was to the 1970s what Chris Sharma/Adam Ondra are to the current decade, except on top of exploring free climbing’s limits, Bridwell established YOSAR, redefined big-wall climbing, made the first alpine ascent of Cerro Torre, solved one of Alaska’s last greatest challenges—the East Face of Moose’s Tooth—made the first one-day ascent of El Cap, built a pair of rock shoes with swim-fin-like toes for wedging into finger cracks, and parsed the YDS into the finer grades of a, b, c and d.

Bridwell doesn’t climb much these days but he still obviously enjoys a smoke, a trademark of his from his hairy aid days and a point that has confounded and confused generations of health-wary climbers raised on nut cutlets. It didn’t help that Bridwell once famously commented, as he was about to go off to Everest on a venture funded by Camel cigarettes, that smoking actually prepared him for altitude. “Even at sea level, my every breath is hard,” he is supposed to have quipped.

By a twist of fate that had Bridwell driving somewhere in a desert, at some point in the past, and for reasons I didn’t fully understand, he had been givena copy of The Urantia Book by a grateful passenger, or perhaps the owner of the car. Or by someone else. It’s unclear, but from that day on,
Bridwell became a student of The Book and he turned the very mind that invented the chalk bag toward solving the problem of how humans came
to inhabit Earth.

“I’m working on a mathematical formula that explains everything,” he said with a dramatic and flourishing wave of his knobby fingers. 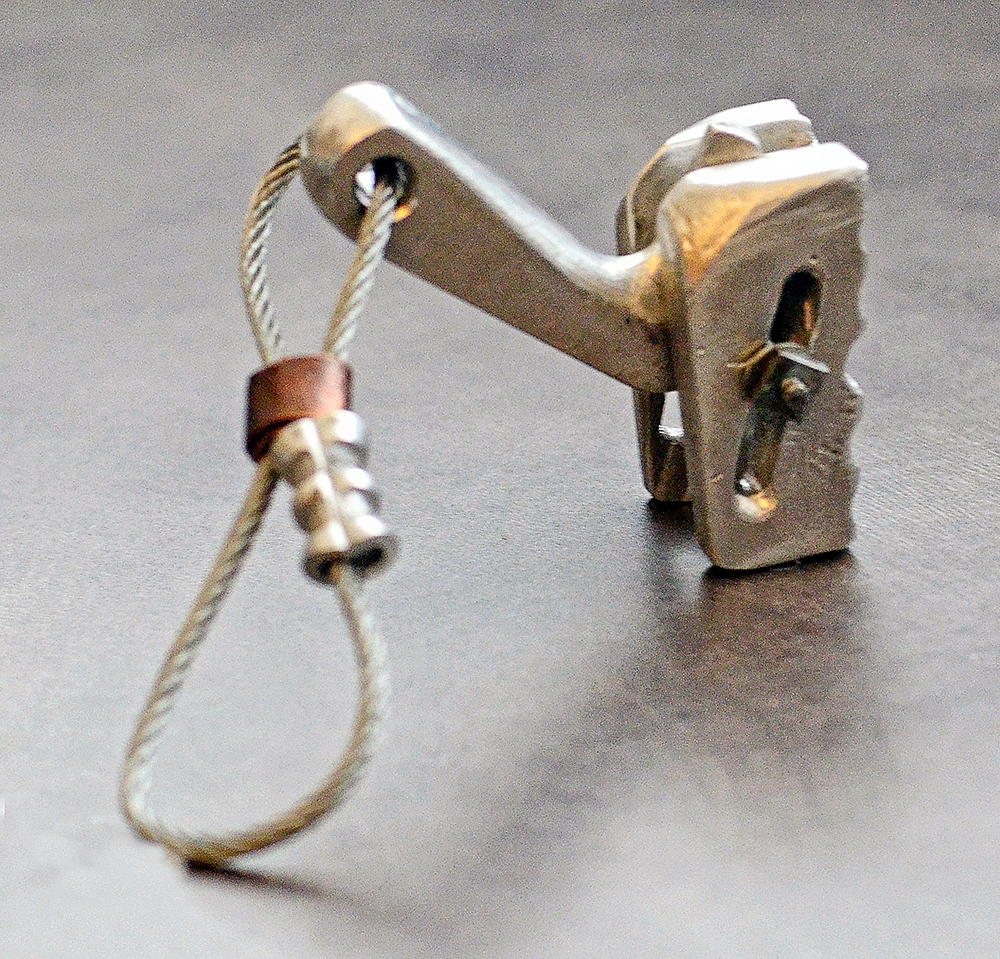 He gazed hard into the lights, then shifted gears—or maybe he stayed in the same gear. “I have something for you to read,” he said.

With that he thumped down the 2,097-page Urantia Book and turned to the precise passage he had in mind.

The section had to do with the corruption of politics and the ways of man and pointed toward enlightenment, but its true meaning was as slippery as the plate of noodles I still hoped to consume once Jim came to the point.

I didn’t get it but nodded anyway.

Satisfied, Bridwell closed the book, reached deep into the folds of his robe and withdrew a Pecker, a hook of metal that looked like a ship’s anchor with
one arm sawed off—another of the Bird’s inventions.

“That fellow over there,” Bridwell said, pointing to a thousand climbers, “said the going rate is $20.”

Bridwell pulled out a rack of hardware he’d hand hewn from ingots of solid aluminum. Most still bore distinctive tool marks and spoke of the persistence and ingenuity of a man who, if necessary, could take string and toothpaste and saw through the bars of Alcatraz. All of his creations were variations on the Pecker, an evolution of Chouinard’s old Crack N’ Up that is part nut, part pin, part hook, made for placements that are too small or tenuous for even the RURP. You could place a Pecker clean, or hammer it in. In the 1980s the Pecker had helped forge legions of ever-harder Yosemite nail ups, but Bridwell had even grander plans.

His latest incarnations of the Pecker included a nut that was wedge shaped like a Stopper, but instead of having a cable, it had a stacking hole in the
center through which you could drive a pin. Another model, a larger one, had the blade painted toucan-style in bands of green, yellow and red.

“It’s a safety feature for people who don’t know anything,” said Bridwell. “Place it all the way to the green and it’s good. Yellow is OK. Red… you get the idea.”

My favorite was a Pecker that had been bolted to a flat-sided cam lobe that for some reason reminded me of an elephant’s foot. This device had obviously taken dozens of hours to handcraft. Even at minimum wage it would have to be the world’s most expensive cam.

“How much for this one?”

“Twenty dollars,” said Bridwell. “but the bolt that holds it together isn’t structural. I found it on the floor. The device still works fine, though.”

Bridwell  led me over to a door, cracked it open, and as a demonstration inserted the cam into his impromptu jig. He wiggled the unit around, making adjustments. It rattled out. “Hold the door while I set this,” said Bridwell.

I did as instructed.  The cam still didn’t grip, but I did get the idea, and Bridwell explained that a door and a jamb weren’t a proper test. “It works
in rock,” he said.

I withdrew $20 and we completed the transaction.

Bridwell gathered up his Peckers and cash in hand, disappeared like smoke into the crowd. I looked for him later but he was nowhere to be found—almost as if he hadn’t been there at all. All I had to remember him by was a Pecker and a bit of knowledge from The Urantia Book.

“Like I said, Chris. That wasn’t Bridwell. That was a god.”