My first assignment as a Rock and Ice intern was daunting: Inform the American climbing public that the future of hard sport climbing had been discovered … in Norway. A relatively unknown Dutch flatlander named Jorg Verhoeven had established a 180-foot 5.14 in the belly of a cave in Northern Norway that looked deep enough to house a supermarket. The kicker was that the cave wasn’t limestone, which had long been considered the ideal rock type for hard sport climbing. In fact, the new “world’s hardest crag” was gneiss. 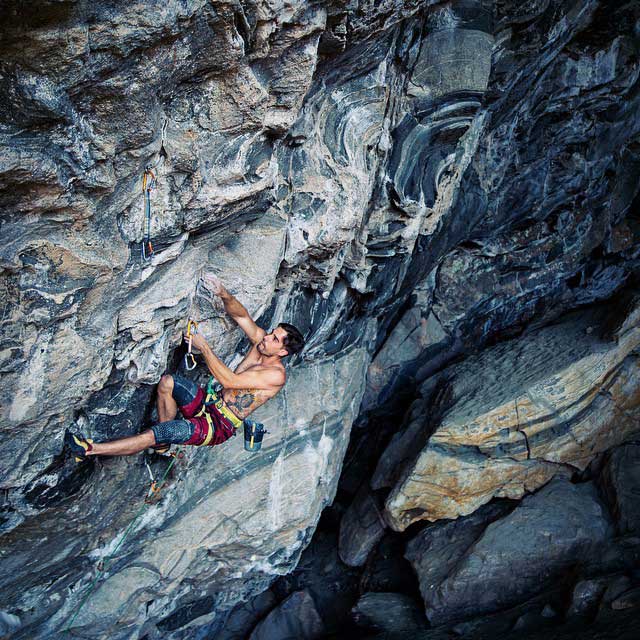 “Santa Linya is like a puppet theater compared to these things …” quipped the Dutchman when asked how the famed Spanish cave routes stacked up against
the potential lines out the Norwegian behemoth.

That was in September 2011. And we now know that the cave has lived up to the hype. The following summer, Adam Ondra established Change, the world’s
first 5.15c, in what’s now called the Hanshelleren Cave outside of Flatanger, Norway. The Hanshelleren cave has become the canvas of choice for the
world’s hardest climbers and route developers.

Yet despite the many news updates and videos emanating from the cave, I realized recently that I knew very little about the actual tactics, aesthetics
and overall vibe of climbing in Flatanger. After seeing photos and social media posts about the crag by high-end route developer and sport climber
Joe Kinder, I took the opportunity to ask him the questions I’ve always wanted to know about the world’s hardest crag, which he visited from the 17
of August through October 4.

What Kinder described was a crag both inspiring and unique, requiring distinct tactics such as rope transfers, and fixed lines for accessing and working
different sections of routes.

So, what does Change (5.15c) look like? Is it unbelievable looking?

That’s funny. I was hitting up Chris Sharma to try and motivate him to come up and he kept asking me the same question. “Is Change cool?” It’s really cool, but nothing like La Dura Dura or Realization cool. I guess it didn’t really have my head spinning. The Iron Curtain,Dharma, and even Move were really rad and inspiring looking because those lines take a massive weakness out the cave. To be honest the whole cave as one giant entity is inspiring..

How long had you been dreaming of visiting the Hanshelleren Cave?

That’s a good question, man … too long really. I saw some teaser images and then some video snippets about four years ago. It was immediately something
I remembered as being downright insane looking. I also figured it was WAY off the beaten path and perhaps unattainable.

What initially intrigued you about the place?

What I was drawn to was the steepness and the rock type. I absolutely LOVE gneiss and my favorite style is cave climbing with physical movement. I grew
up climbing on similar rock in New England and even the surrounding ambiance looked similar.

Upon arrival, was it everything you had imagined?

The routes are massive and are very accessible. Most of the time you jug up fixed ropes to work out pieces of the routes. You gather so much information on these rigs, like rests, kneebars, places you transfer ropes, and even spots where
your belayer has to be on guard, as you are close to the deck.

So the tactic for trying the cave’s long routes is to jug fixed lines and try sections?

Many of the routes have fixed ropes in the broken-up sections (knee-bar in a large crack feature or near a no-hands rest). These ropes allow you to jug
up and work particular sections of the route, which is really clever considering how long they are. Usually the jugging is still near the ground (15
meters) as the ground follows a lot of the wall.

Will you bring this technique back to your projects in the States?

This is something I will surely bring back to my projects here in the USA as you can focus your optimal energy on those particular cruxes. I would call
this a pretty unique method actually.

OK. And what’s up with the rope transfers?

Rope transfers are for the longer routes and allow you to a) avoid hitting the ground with rope-stretch because the ground follows the routes through the
cave, and b) eliminate rope drag. Rope transfers are done by clipping into a fixed rope at a rest and manually pulling your rope through so your belayer
can relocate closer to you and further up the route.

Was there a transition period of learning the style in the cave? Or did you just jump right in and start cranking?

The process I took was to get the style learned as fast as possible in order to have a successful trip. The first week I did 5.13b or 5.13c routes and
realized that it’s not as technical as I was expecting and there are TONS of rests so you can really manage your fatigue well. To be honest the style
is pretty basic. Usually gneiss is relentless and requires a lot of sketchy moves or awkward climbing, but this place is comfy. There was nothing tweaky,
painful or bizarre feeling so I really loved that.

How long are the routes and what makes them unique compared to other areas?

The rigs are massive. I found that it’s best to (mentally) break them up into pitches or sections separated by checkpoints. Most of the lines are intermittently climbed with a kneebar or an odd-ball-rest that allows you to recover and continue. Some of the rigs take 30 minutes to redpoint!

The only negative thing I can say is a few of the lines are a little funny in terms of where you climb and where it ends. But hey… it’s sport climbing
and all just fun-filled-action anyway so whatever. The comparison to USA would be a little bit of Rocky Mountain National Park, Shagg Pond and even
the new Cascade/Zebra wall in Tahoe … perfect, fine grain rock that never cuts the skin and SUPER steep. It has lots of rounded features and
good movement. Seriously writing this right now is getting me psyched up for the place and I just got home …

So you definitely put down some hard routes. What did you climb?

I honestly didn’t do that many hard lines. When I think of “hard” I feel like that’s 9b or so. We can all thank Ondra, Sharma and all the other top dogs
for that. I did a lot of the “intro hard” routes I guess. I climbed Nordic Flower, Eye of Odin, Nordic Plumber, The Fire Within,
and Muy Verdes. All of them felt the same more or less … in the 8c (5.14b) range.

Did you join in on the developing efforts in the cave?

To be honest I didn’t see any solid lines to bolt … not to say it is tapped out and there aren’t any, I just never found a striking pathway that spoke to me. I bolted some really cool connections and extensions, but they were far from solitary lines. There are holds ALL over the place and giant features so the wall takes some exploring.

Finally, was the cave good enough to keep you coming back?

I have to say, the Hanshelleren cave is my new favorite spot. I tried some of the harder jams my last days too … 5.14d/5.15a and they were SOOOO
good. It will now plague my brain until next year!