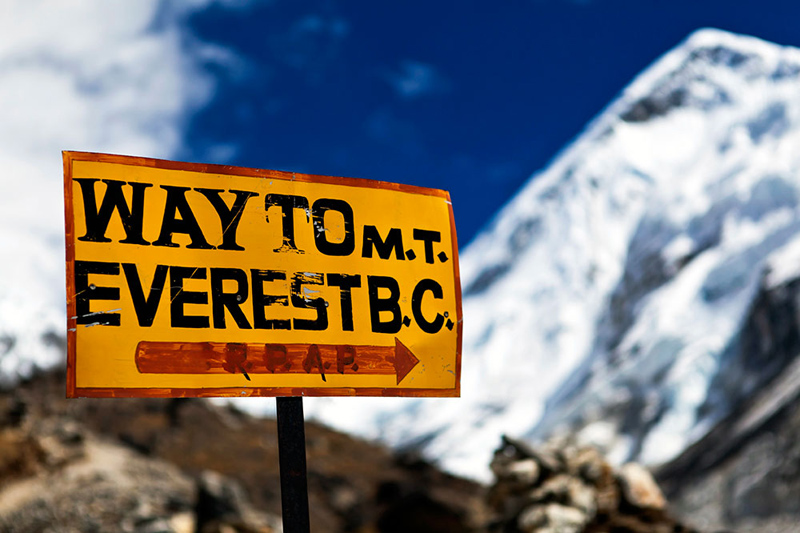 Tomorrow is May 1, the official beginning of Evere$t $ummit
$ea$on. Just as basketball has March Madness, climbers have May on Everest, AKA Mayhem. Like a huge and dangerous soap-opera set, each May the flanks
of Everest are overrun with humanity engaging in every sin from rampant fornication to shameless acquisitiveness. The on-site hospital, sushi nights
and movie screens are all fueled by an often-altruistic desire to climb to the highest point on Earth for fill-in-the-blank. Oh, and the show is also
made possible by $$,$$$ per client, generators and hundreds of low-paid brown guys with heavily muscled legs.

Wake up, people, Evere$t has been climbed more than 3,000 times! Why don’t you spread the love around? Go climb one of the other, harder, 362 peaks open
for mountaineering in the region. The Sherpas would love to carry your stuff up to any number of other scenic camps and dig latrines, cook your food,
stomp out the trail to the summit, fix your rope and haul you to the top and back down, and then carry your trash out.

I write about how un-cool Everest is every year and every year people comment on how wrong I’ve got it and how climbing Everest is actually pretty darn cool. They say that it’s not a shitshow, but some kind of vision quest—or at least a deeply
satisfying experience. And as far as the pollution and trash, well there’s an Everest culture and community that requires that energy and packaging,
plus the Sherpas make X-percentage of their yearly income while hauling that trash and waste through the deadly Khumbu Icefall and therefore climbing
Everest actually helps them out. And to that I say, “Bullshit.” The Sherpa would probably be better off without the yearly influx of mostly affluent,
type-A gringos. The history of cultural contact with the West is almost always a tale of exploitation and cultural assimilation where rich ethnic traditions
are replaced by addiction and consumerism.

Last year a Chinese guy who was trying to poach the mountain without a permit got his ass beat by some Tibetan guides.

Sometimes
people attack my yearly Evere$t screed with the remark: You haven’t been there, so shut up. And to that I say, “Touché.” You’re right, my ignorance
must be clouding my understanding because, as an uninvited Everest interloper, somebody who has never been there done that, just a regular average
climber who has followed the Everest news for the last 20 some-odd years—to me that mountain looks all F’ed up. People dying right and left,
police arresting folks for having a Tibetan flag. Last year a Chinese guy who was trying to poach the mountain without a permit got his ass beat by
some Tibetan guides. And then there’s the ant lines of people slowly ascending fixed ropes, doping, cell phones, helicopters, human remains, neophytes
who don’t know how to work their gear sitting in the snow freezing their faces off until someone rescues them, and when nobody comes they just die.
To an ignorant outsider like me it all seems pathetic.

What would it take to make Everest cool again? For me it would take an unsupported, no-02 sucking, new route. Ironically, that’s exactly what badass alpinists
Ueli Steck, Simone Moro and Jonathan Griffith were preparing for last Friday when they traversed (unroped) across the rope of a team of high-altitude
Sherpas to reach their tent at Camp 3 on the Lhotse face. According to a press release that Griffith sent me yesterday, he passed under the leader
first. Ueli Steck followed and as he stepped over the rope, the Sherpa leader looked down and began shouting and banging the ice with his axe. He then
fixed his line and, according to Griffith, rappelled right onto Steck. When Steck put his hands up to fend off the Sherpa, the man started screaming,
“Why you touch me?!” and began violently striking the ice with his axe and accusing the climbers of knocking ice on them. Steck attempted to appease
the leader by offering to fix some rope but according to the report this seemed to make matters worse. When Moro arrived, the leader turned on him
and threateningly brandished his ice axe. The aggression surprised Moro and he swore. After that, the leader became incensed and ordered his entire
team of 17 Sherpas down the mountain and back to Camp 2.

Trying to “smooth things over” Steck went on and fixed a further 850-feet of rope, all the way to Camp 3. Then things got weird.

When the trio arrived back at Camp 2 about 100 Sherpas rushed in and punched and kicked the climbers and pelted them with rocks. Steck’s face was reportedly
badly cut. Luckily, a small group of guides and clients pushed in and “acted as a buffer between the out of control mob and the climbers.”

According to Griffith, one Sherpa told the climbers that “by that night one of them would be dead, and the other two they would see to later.”

The altercation was over in 50 minutes during which the climbers escaped and hid separately. They regrouped after the shouting stopped and were informed,
“that if they weren’t gone in an hour they would all be killed.” So they packed some essentials and climbed down through heavily crevassed terrain
unroped, feeling that “given the current situation this was the safest place to be.”

Steck, Moro and Griffith admit they don’t fully understand why the Sherpas attacked them. They claim to have
not disturbed the work or even touched the fixed rope, and both Griffith and Moro have stated that it’s “highly unlikely” that they knocked ice on
the Sherpas since they were climbing 150 feet to the side of them. But they speculate that the lead Sherpa’s pride was hurt by the professional climbers
who were blazing past him unroped. Furthermore, I’ll bet the Sherpas didn’t like watching Steck do their job for them as he easily strung rope to Camp
3. But again, that’s just speculation.

I contacted Luis Benitez, who summitted Everest six times as a guide for major outfitters and asked specifically about why he thought the Sherpas went
berserk. He wrote:

It brings up the ever-present question on Everest: When will leadership in ethics and values play a greater part in not only the goal of summitting, but the road to get there. I keep reading these reports man, this is nuts. Does no one remember Henry Todd [head of a guiding company] being banned from Nepal for three years for violence only to return to operate as usual? How can we not be condemned to repeat history if we do not learn from it? When western media (which mostly knows nothing of Everest) is calling for limits on crowds and team size, who among the guiding community will rise to the challenge? Guiding companies go about their business even when, during the torch relay for the China Olympics, most had satellite phones confiscated and some were kicked off the hill for having Tibetan flags and Nepali soldiers with guns were at Camp 2 halting climbers from passing. The Nepalese government paid attention when China asked them to, but refused to pay attention to the rights-abuses on the mountain. Why? Money. Everest is a money mint for the government and the country.

I read something interesting tonight that Sherpa animosity could be about Westerners getting most of the credit and funds. It’s true. For example, my friend Lhakpa Rita a senior guide for Alpine Ascents, first Sherpa to do the Seven Summits, got barely a nod from the media. There are great org’s like the Khumbu Climbing School that are trying to even the odds and Sherpas for many teams like IMG work directly with the western clients, yet only when the western guides are the assistants and the Sherpas are the lead guides will we really, as a climbing community, have put our money where our mouth is. Furthermore, the government will never regulate the amount of climbers on the hill. It is up to the guiding industry to stand up and say something like “we will go every other year” or every third year and have a cap on the amount of clients. The opportunity to do something different is there, it will just take a company that’s brave enough to say “enough is enough.”

Regardless of why the Sherpas attacked [read Sherpas’ viewpoint here],
I’m once again saddened by the state of “climbing” on Everest. In fact, it’s becoming apparent even to the “insiders” that the highest peak in the
world is not a place for climbers at all. The only real team on the mountain this year, Moro, Steck and Griffith, are appalled, hurt and scared, and
according to Griffith have abandoned their attempt to do something significant on this teeming pile of human ego. As Griffith wrote today in an interview
on ukclimbing.com: “As a final comment: A very influential character (sorry no names right now) has asked the Ministry of Tourism to have written on
every permit that climbers are not allowed to climb before the fixing team. If this happens it means the only way you can climb Everest is by climbing
in a nice big track and on fixed lines with tons of people. It is insane, but it shows the attitude towards this mountain.”

As usual, the Evere$t season has me buffaloed and it’s not even Mayhem yet. It’s like a good TV show, you never can guess what will happen in the next
episode. Will somebody shit in the hood of his snowsuit? Sleep with another man’s wife? Start a fight? Or die? Probably. Stay tuned.