Doug Robinson swung by the house last week. He pulled up with Eva, the two of them wedged in a sedan with the back
seat stripped out and so loaded with books and DVDs and gear that you couldn’t have fit one more thing in there, including air.

Doug was on his way east, driving from California to the Gunks. Along the trail he’ll stop and star in various appearances, at gyms mostly, he said, because
that’s where climbers hang out these days. “Aren’t many climbing shops left,” he said with a sigh.

One of the items he is showing off is The Alchemy of Action. His most recent book, Alchemy took him a lifetime to write. I know this
as a first-hand fact because when I met him in 1982 he had already been thinking and working on it for 15 years, connecting the dots between climbing
(the Action part) and how the euphoric feeling it gives you might be your body cooking up chemicals similar to those of LSD, peyote and other natural
and man-made pharmaceuticals (the Alchemy bit).

It is understandable that Doug had things get in the way of the book. He had to found and preside over the American Mountain Guides Association, and teach
about a million people to climb via his “Moving Over Stone,” a best-selling 1988 instructional video that he’s also now touring with as a 25-anniversary
DVD re-release. I watched MOS the other day, and that was to view the sport as a prehistoric insect encased in amber. The climbers—Todd Skinner,
Dale Bard, Bobbi Bensman, Jerry Moffatt, John Bachar and others—are similar to today’s species, but only similar. They wear really tight clothes,
pull on bootish Fires and have mops straight out of Saturday Night Fever. Is that how we really looked?

Before and during his writings, Doug invented the Tube Chock, a large piece of pipe with the ends sawed into the angles of a Stopper. It’s for big cracks,
Doug’s forte, but last Wednesday he admitted as we climbed a wide 5.10 that tube chocks really “don’t work well.” Better than nothing, in any case,
when cams and BigBros were still a decade(s) from the drawing board.

Doug has always been a clean cat and to this day still doesn’t use chalk. Long before Half Dome went free, he and Galen Rowell and Dennis Hennek climbed
it with nuts only, a heady idea back when nuts were basically scrap metal and people wrote angry articles such as “Nuts to No Protection!” condemning
them.

That ascent of Half Dome was the cover story for a 1974 National Geographic and included a shot of Rowell suspended in a hammock, bedding down
for the vertiginous night. Later, it was revealed that Hennek had taken a photo of Doug taking the photo of Rowell. Hennek’s pic showed Doug, stark-raving
nude, standing on a large ledge that was only a few feet beneath the hammock.

“Google ‘Doug Robinson,’” said Eva, “and you’ll find lots of photos of him naked. I don’t know if he ever climbed with his clothes on.” 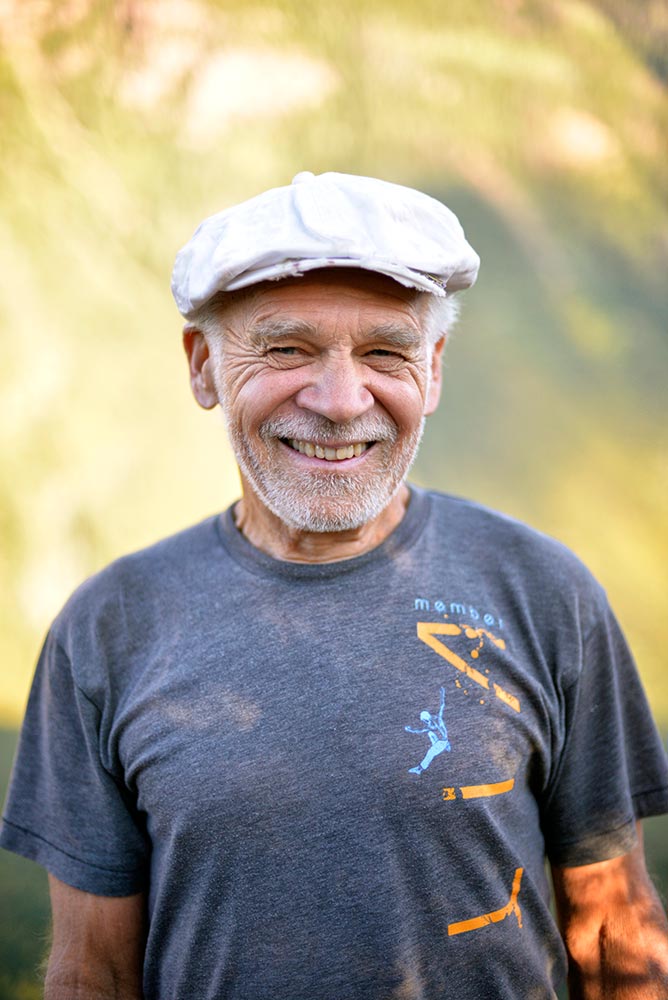 Doug was of the generation that bridged the old school of Royal Robbins and Yvon Chouinard, and the newcomers Jim Bridwell and the Stonemasters. He’s a
hippie (he might prefer “bohemian”) molded by the Bay Area scene of the 1960s when you could freely enjoy certain now nearly forgotten liberties that
I suspect provided the germ for his alchemy concept.

Today,
the tie-dye is replaced by a tux. “It was my father’s,” said Doug, who though 67 is still built like an oak burl and whose bright blue eyes can still
charm any woman they cast upon. “I’m wearing the tux to the premier tomorrow night of Valley Uprising, in Boulder. They said that they are
rolling out the red carpet and I am holding them to that.”

When Doug showed up to the film he was awarded “best dressed man in the house,” a likely first for someone whose  other formal outfit is his birthday
suit.

Valley Uprising is exciting, said Doug, who noted that he especially enjoyed the animation of a tab of blotter acid shimmering in paisley on Jim
Bridwell’s tongue, “transforming to his eyeballs spinning.”

But, according to my sources, an even bigger highlight was when an Access Fund representative hopped onstage for a presentation, and a cloud of suspect
and skunky smoke wafted out of the Colorado audience.

“Doug Robinson must be in the house,” someone quipped

To catch Doug on his tour, check the dates and locations at movingoverstone.com.