Sometime in the mid-1980s at approximately 5 p.m., I was standing in El Aguaje Deposito trying to decide whether to spend my three pesos on a bitchin’ El Aguaje bumper sticker or a bag of pumpkin empanadas when I felt a huge paw-like hand gently grip my shoulder. I turned to face a massive Mexican fellow with smoldering brown eyes and a spectacular mustache. With his wide-brimmed cowboy hat tipped back and his western shirt tucked into a tooled leather belt engraved with the letters of his name, HOMERO, he looked both imposing and a little embarrassed, like a lion squeezed into pointy-toed boots. He was saying something in Spanish to the effect of, “Your belongings are not safe up there.”

I was part of a band of gypsy climbers who showed up every winter to Potrero Chico, a municipal park outside of Monterrey, Mexico, and home to loads of virgin limestone walls up to 3,000 feet tall. We were camping at the Nacimiento, a cow pasture located at a springhead that supplied water
to the town of Hidalgo, Nuevo Leon. After some pantomiming and the intervention of my 20-year-old Colombian/American girlfriend, Cristina Wait, we gathered that Homero wanted us to come stay at his house.

But Homero was extremely insistent that we—not just me and Cristina, but the entire crew of Montanans, Coloradans, Texans and Mexicans—move
our rowdy camp into his house—immediately. The El Aguaje beer girl was loading cases of beer, ice and limes into Homero’s truck. Chickens were
on the parrilla, he said, trilling the Rs. The fantastic mustache lifted into a grin.

There was something exceptional about Homero. You could see it right away. He was handsome, with that unique mixture of unbridled hospitality and wholesome desire to bond that typifies the people of northern Mexico. But there was also something dignified, something a little melancholy, about him, too. Even during stomp-down 3 a.m. stuffed-jalapeno-eating contests he retained a certain quiet distance—listening and observing. This was his defining characteristic: He really liked people. He really cared about you and your life. He knew how to listen. And he knew how to throw a party. 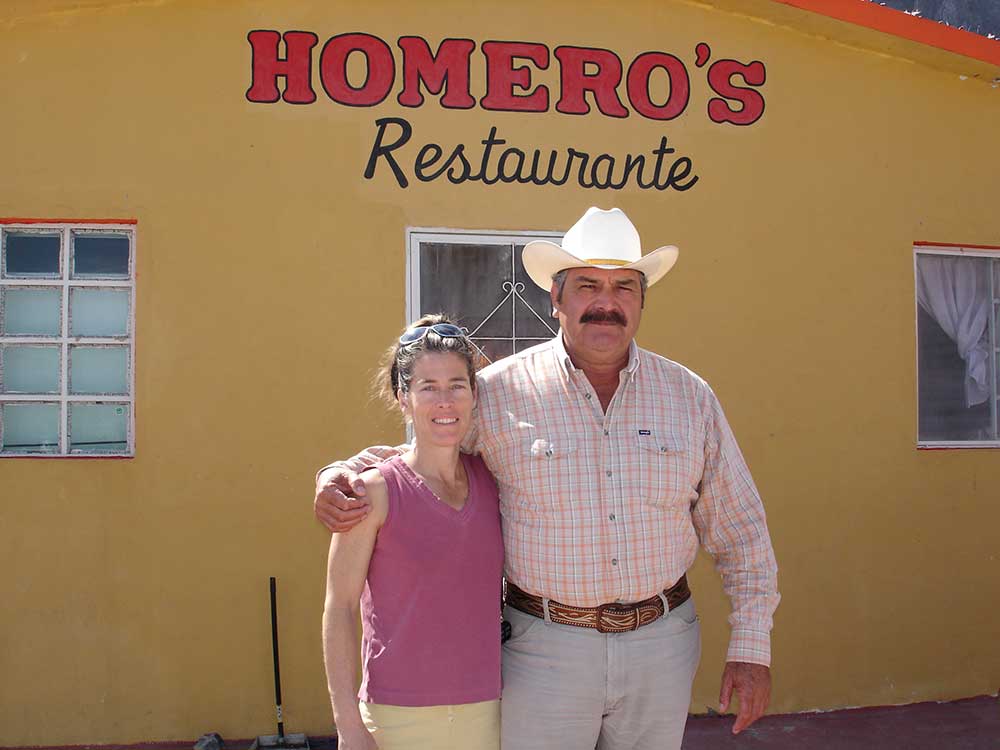 That night Homero’s vibe was so genuine and at the same time puckish that he won us over in five minutes and we drove off with him under flickering sodium lights into the desert at the edge of Colonia Francisco Villa. We turned left and rolled through a red metal gate with LA QUINTA SANTA GRACIELA spelled out across the top in deft metalwork letters.

We parked and walked through a grove of orange trees planted around a shallow swimming pool. Water from a black hose splashed hypnotically, overfilling the pool and it looked a lot like the oasis depicted on the El Aguaje bumper sticker except there were magnificent black walls towering over us, blotting out big sections of the star-filled sky. Out back we came to a crowd of men—all more or less carbon copies of Homero but with different names on their belts. Homero’s brothers Emilio, Guillermo, Gilberto, Hector, Doroteo, Gerardo, Mario and Everardo all stepped up, hugged me and slapped my back twice. 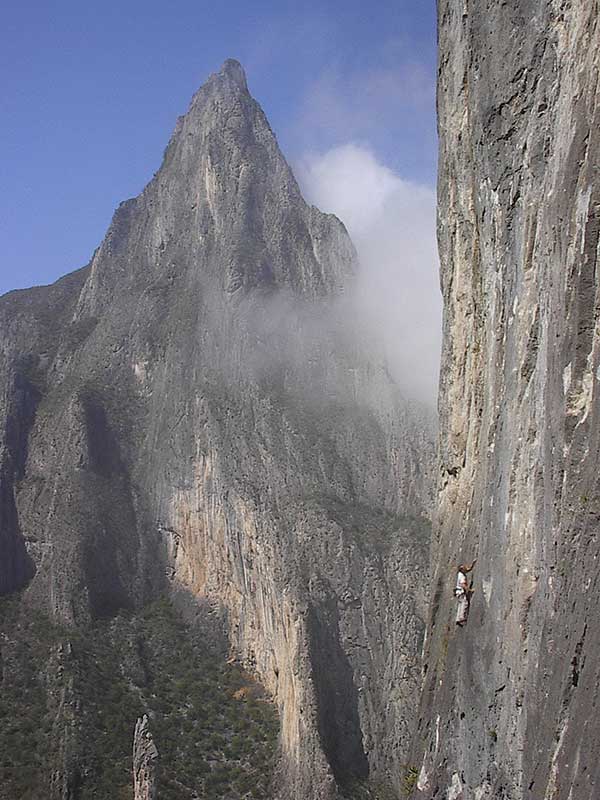 Cristina and I were a little awkward and off balance as the king-sized posse of Mexican cowboys embraced us, looked into our faces and shyly muttered their greetings. But soon after we were hugged, our friends Tony Faucett and Rick Watson pulled up with a pickup full of food that some Mexicans had dropped off at the base of their new, roadside route Central Scrutinizer. And then everybody started showing up. The Montanans, the Coloradans, the Texans and Mexicans. Homero’s sisters Maria, Araceli and Anabel arrived and very sweetly welcomed us, followed by Memo Gutierrez and Nelly, Homero’s wife.

Inside the Quinta, the tables were piled with bananas, apples, oranges, limes, avocados, onions, tomatoes and jalapenos, blocks of cheeses, comalsof corn tortillas, baskets of tostadas, cans of tuna, and bowls of kick-ass tomatillo, chilli pequin and chili de árbol salsas. Outside, a grill about
the size of a 1966 El Camino wafted mesquite smoke and it was loaded wall to wall with roasting chickens.

The men coalesced around the grill. A friend of Homero’s, Pando, the owner of a few Monterrey nightclubs, strummed a beautiful big-bodied guitarrónand belted out ranchero classics. He had on a white denim jacket, a white cowboy hat and elephant-hide boots. A blocky pistol rested in a holster at his hip.

I’m not too clear on the details after that. I remember that a guy named Rodolfo del Bosque opened a bottle of La Rojena Grand Centenario Reposado tequila and we drank it, “careful, just a little sip” at a time until it was all gone. Rick said it tasted like warm wine and promptly fell into the fire. And then Tony was holding onto Pando crooning a song he’d just made up called El Carpintero. “¡Clavale, clavale, clavale!” (Nail it!)

Or maybe Hank bit people on another night, and that’s the wonderful thing about Homero’s fiestas—they sorta blend together into one enormous, never-ending party. Eating, drinking, arm-wrestling, trying to lift two Gutierrez Villarreal brothers off the ground at the same time, throwing firecrackers under mariachis’ feet, re-enacting the Alamo with bottle rockets, real Texans and real Mexican attackers—climbing hard all day and in the evenings coming together with Homero and his brothers and the community of Hidalgo to share the stories of our lives in solidarity.

After that first night Homero opened his house to climbers—“This
is your house”— and we poured in from all over the world as Potrero Chico gained a reputation as a premier winter climbing destination. Somehow
it didn’t even occur to Homero to charge people to camp at the Quinta, even when the crowds exceeded 25 or 30 longhaired, international dirtbag climbers
who stayed all winter. In 1993, Homero was laid off from his job as a heavy-machinery operator when the huge company Cemex bought Hidalgo’s community-owned cement factory. One evening over Carta Blancas, costillas, cabrito and guacamole, (followed by generous glasses of Don Pedro brandy), I suggested that Homero turn the Quinta into a proper campground. Reluctantly, he agreed and Homero’s Ranch became one of the most famous climber’s campgrounds in the world. Over 20 years later, it’s still in business, and the fiesta is ongoing.

Homero Gutierrez Villarreal, son of Gilberto Gutierrez Alvear and Graciela Villarreal Gutierrez, died of a heart attack on July 2. He was a few days short
of 60 years old. As a child, Homero was mischievous and liked to play with his slingshot. He loved baseball—played first base and batted cleanup.
He was an avid fisherman and hunter and was fond of horses, organizing community horseback rides. When he was young he got into weight lifting and was renowned for his strength. Later, despite a few close calls (often resulting in shoulder carnage for the loser), Homero never lost an arm-wrestling match.

Within the community of Hidalgo, Homero was known as a peacemaker, going out of his way to help friends settle disputes. He liked to assist people who
were in trouble with the law by finding them lawyers. Friends described him as “kind, humble and hospitable.”

Climbers will always remember his generosity—a bigheartedness that bordered on saintly. And we’ll remember his presence, too.

“He always had the aura of the jefe,” Hank Caylor said of Homero. “If he’d been in prison or the mafia or just running a work crew, he didn’t
have to say it—he was in charge. Some people just have the charisma.” 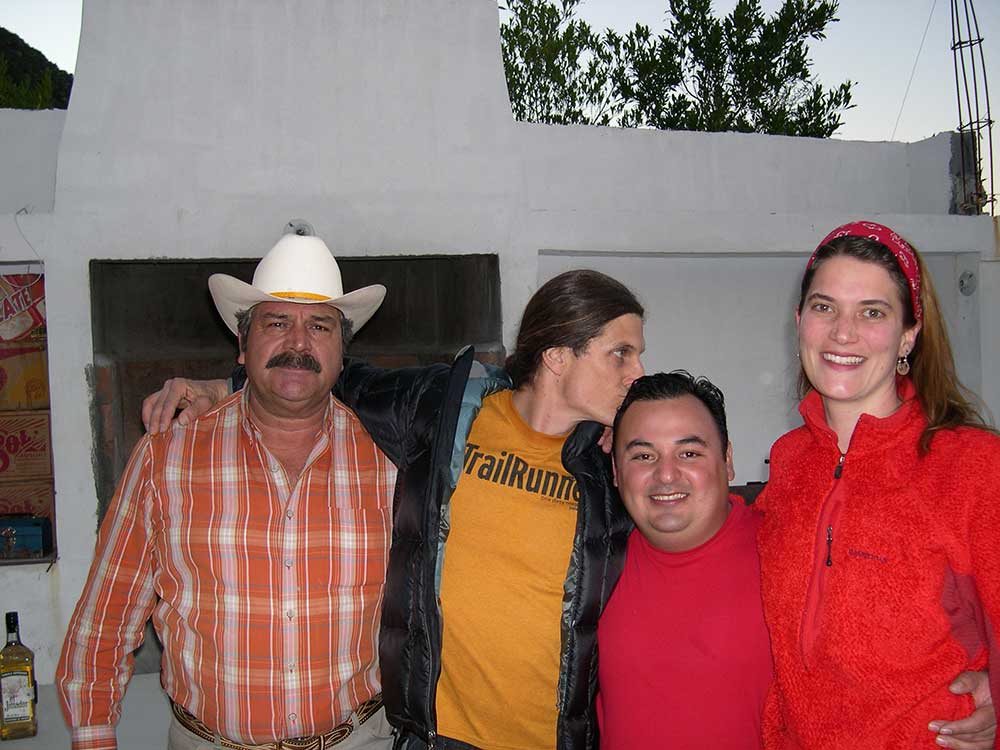 Several members of Homero’s family (listed below) were kind enough to answer my questions about Homero, offering memories of his life, but my favorite image came from his sisters Anabel and Araceli. They said that when Homero was a young boy he enjoyed listening to his mother and sisters talking as they prepared tamales. And I can picture him there, sitting a little to the side, quietly listening—interested, dignified and maybe a little sad—as if he already knew something about the heartbreaking transience of the human condition and the transcendent power of human connection.

Please include your memories of Homero in the comments below.