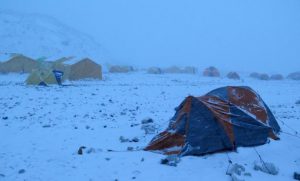 Raphael Slawinski, 48, is one of Canada’s leading alpinists. Born in Poland, he emigrated in 1979 and now resides in Calgary where he is an associate professor of mathematics and physics at Mount Royal University, and “specializes in Canadian Rockies’ choss.”

In 2014, Slawinski and Ian Welsted received the Piolet d’Or for their first ascent of K6 West (23,294 feet) in the Karakoram of Pakistan. Both men were also named National Geographic Adventurers of the Year for the ascent.

He was on the north side of Mt. Everest on April 25—attempting a new route on the Northeast Face in alpine style and without bottled oxygen—when the 7.8 magnitude Earthquake rocked Nepal.

Raphael Slawinski Reports From Everest After The Earthquake 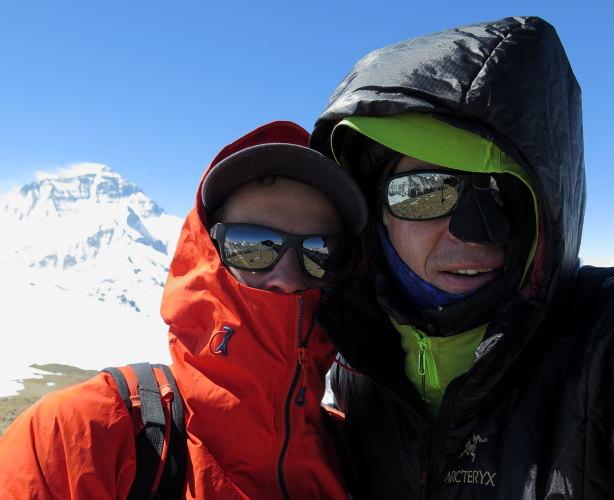 The day was chilly, with occasional flurries sifting down from a gray sky. We were lounging in the mess tent after lunch, bellies full of
couscous and salad, when the earthquake happened. It started as a feeling of unease, of wrongness, like a silently onrushing avalanche. At first we
didn’t know what was going on, then someone said, “Earthquake!” We rushed outside of the mess tent. The ground was shaking harder and harder: it was becoming hard to keep your balance. I sat down on the cobbles. The initial eerie silence was broken by the clatter of rocks bouncing down the hillsides above basecamp. Stones emerged from clouds of dust only to be swallowed up again. Long after the shaking stopped we kept asking ourselves, “Can you feel it? Can you?” It was hard to tell the difference between aftershocks and the pounding of blood in our temples.

Small groups congregated between the tents, exchanging rumours and speculation. After the initial panicked minutes, we realized that, in the middle of a large plain, we were safe – as long as the half-frozen lake on the moraines above camp didn’t burst its banks. But what about the friends who’d left in the morning, bound for advanced basecamp? How did they fare? In places the yak trail led between steep banks of unstable rubble. And what about the far more numerous groups on the opposite side of the mountain? Their path ran through the teetering ice towers and yawning crevasses of the Khumbu icefall.

Gradually, snippets of news filtered in over mobile and satellite phones: an earthquake of magnitude 7.9, with an epicentre just outside of Kathmandu. We thought about the narrow streets, the hurriedly built houses, the haphazard wiring. Then we thought of the millions of people who called this chaotic metropolis home. Most of the kitchen staff in basecamp had families in Kathmandu; the Sherpas sent their children to school there. As the afternoon wore on, and the lines to Nepal remained jammed or cut, they talked in low, worried voices.

By dinnertime we were starting to relax. After dinner, to distract ourselves, we started watching “When We Were Kings”. The story of the epic fight between Mohammad Ali and George Foreman, set against the background of post-colonial Africa, was a world away from the dense snow falling beyond the yellow
walls of the mess tent. 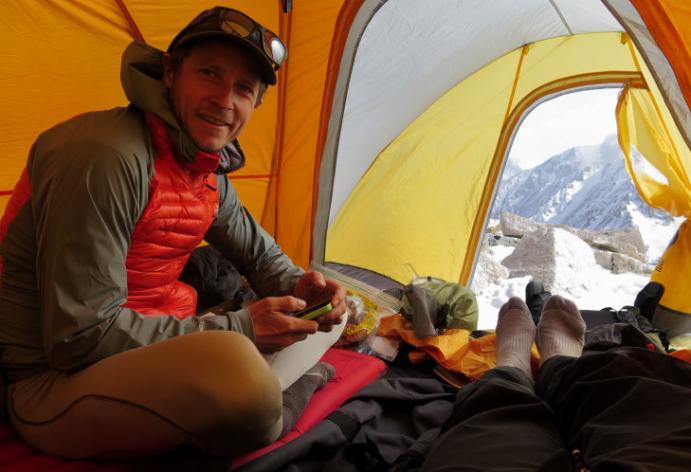 “Hello?” came from the darkness outside. Dominic, the leader of a neighboring commercial expedition, stepped inside, the hood and shoulders of his jacket piled with snow. His face was grave: “We heard that a strong aftershock’s expected in the next couple of hours. All of our members are fully dressed, just in case the lake above basecamp floods.”

Hurriedly we changed from camp booties into boots; threw sleeping bags and passports into packs. For the next few hours we exchanged nervous jokes as snow continued to fall from a black sky. As we sat drinking weak Lhasa beer with a few Sherpas, looking at images destruction in Kathmandu on a mobile phone, the night took on an increasingly surreal tinge. Eventually we grew too sleepy to care about the lake and dispersed into our tents. Earthquake or not, after my first beer in weeks, sleep came easily.

The following morning, the extent of the damage wrought by the earthquake became clearer. More than ten people were dead or missing in avalanches on the south side of Everest – and hundreds if not thousands in collapsed buildings in Kathmandu. In the midst of news of devastation, it was a consolation that the families and homes of the Nepalis around us were safe.

Once again, as the day wore on, we relaxed. David prepared to scramble a couple hundred metres up a nearby hillside in search of a stronger satellite signal, to upload an Internet update and let friends know we were safe. Then we felt the ground lurch. We jumped up and rushed outside the mess tent: I felt like a sailor on the deck of a swaying ship. Rocks crashed down from hundreds of metres above where we balanced on widely planted feet. “Maybe I go tomorrow,” David stammered out.

“We go to the mountains seeking adventure. This means accepting greater risks…”

We go to the mountains seeking adventure. This means accepting greater risks than we run while projecting a hard sport route at Acephale or the Lookout. A storm that hits when you’re two days up a route; a serac that collapses as you hurriedly cross under it; a volley of stones that bounces down a bare icefield while you cower under a pack. You hope that none of these happen, but you’re not completely surprised if they do. But the world’s even bigger and less predictable than we like to believe.

Two years ago, Ian, Jesse and I traveled to Pakistan. Four days into the trip and two hours into the drive up the Karakoram Highway, we got word that Islamic fundamentalists had executed 11 people in the Nanga Parbat basecamp. We’d come expecting danger from inanimate rock, ice and snow, but not from fanatical humans. Jesse went home; after much uncertainty, deliberation and soul searching, Ian and I went on. 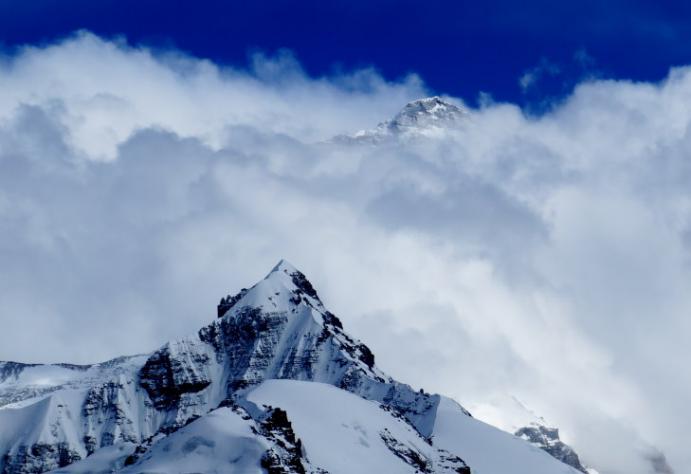 Now, Daniel, David and I find ourselves confronted by another unexpected hazard. This danger does not come from human malice, but from inanimate nature. Like the Taliban attack in the troubled tribal areas of Pakistan two years ago, perhaps an earthquake in a tectonically active zone also shouldn’t have been a surprise. However, just as Kalashnikov-wielding militants didn’t figure into our risk calculus two years ago, neither did the mountains trying to shake us off . As I write this, I don’t yet know if our expedition will continue or come to an abrupt end. Compared to human tragedy on the scale emerging from Kathmandu, climbing ambitions and concerns begin to seem awfully frivolous. And even if we do go on, the first time we set foot on a steep mountain face, I’ll flinch at every vibration beneath my crampons.

TNB: Suicide in Our Sights