–Pro rock climbers have their hands full.
Despite the general assumption that the lifestyle is a veritable cakewalk of climbing new routes or boulder problems in exotic locations around the
globe, a few glimpses into the true hardships of modern professional climbing have surfaced in the media lately. Take, for instance, Sasha DiGiulian’s recent dilemma. After securing sponsor money to make the first female ascent of Orbayu—a nails-hard 5.14b multi-pitch in Spain established by Iker and Eneko Pou—DiGiulian discovered that the dates she’d allocated for projecting the route—not only trying the route but documenting the process with a film crew, of course—were already “reserved” by the Swiss climber Nina “La Machina” Caprez, who had her heart set on making the first female ascent (and documenting the process with her own film crew, of course).

As I read DiGiulian’s blog post about the issue, I was reminded of something the legendary free-climbing pioneer and climbing shoe designer, Heinz Mariacher, told me during a recent interview.

“In my early days, climbers gained attention by climbing well,” he said, “but these days it’s the contrary, because nearly everybody climbs well.”

While I pondered DiGiulian’s dilemma, Mariacher’s words resonated and I realized that the real problem was not that DiGiulian and Caprez couldn’t climb the route at the same time. It was that they couldn’t create a personal story and document their process at the same time.

As DiGiulian explained to me, “I would be much more ready to go and take my fair place at the starting line were she not rigging the route with static
lines and having cameramen hanging on it.”

The modern pro climber is faced with a new challenge. Besides crimping their ever-living brains out and sending the gnar, they also have to successfully propose, sell and create stories about their groundbreaking ascents.

The sport of climbing has grown considerably since Mariacher’s glory days. Lots of climbers have the skill to climb at a world-class, attention-grabbing level. Therefore, the modern pro climber is faced with a new challenge. Besides crimping their ever-living brains out and sending the gnar, they also have to successfully propose, sell and create stories about their groundbreaking ascents.

Marketing, telling and selling stories is nothing new for climbing. Expeditions to the greater ranges have sold their ideas, epics and summit glory for years. However, it now seems that these marketing tactics are necessary to be a pro in mountaineering’s once-countercultural sub-genre of rock climbing. In fact, entire marketing campaigns are now being created to tell the story of a climber not sending, but attempting … a boulder problem.

As a voracious climbing-media consumer, I took notice when Alex Johnson’s “Siege the Swarm” campaign (built around Johnson’s attempts to climb The Swarm(V13/14) in Bishop, California) began permeating my social-media feeds this past winter. Then I was a little startled when handed a gift bag at the Winter Outdoor Retail trade show that featured a stencil of Johnson on The Swarm.

V14 #siegingtheswarm was emblazoned in the bags upper left corner. And the image was captioned: Alex Johnson Sieging The Swarm. 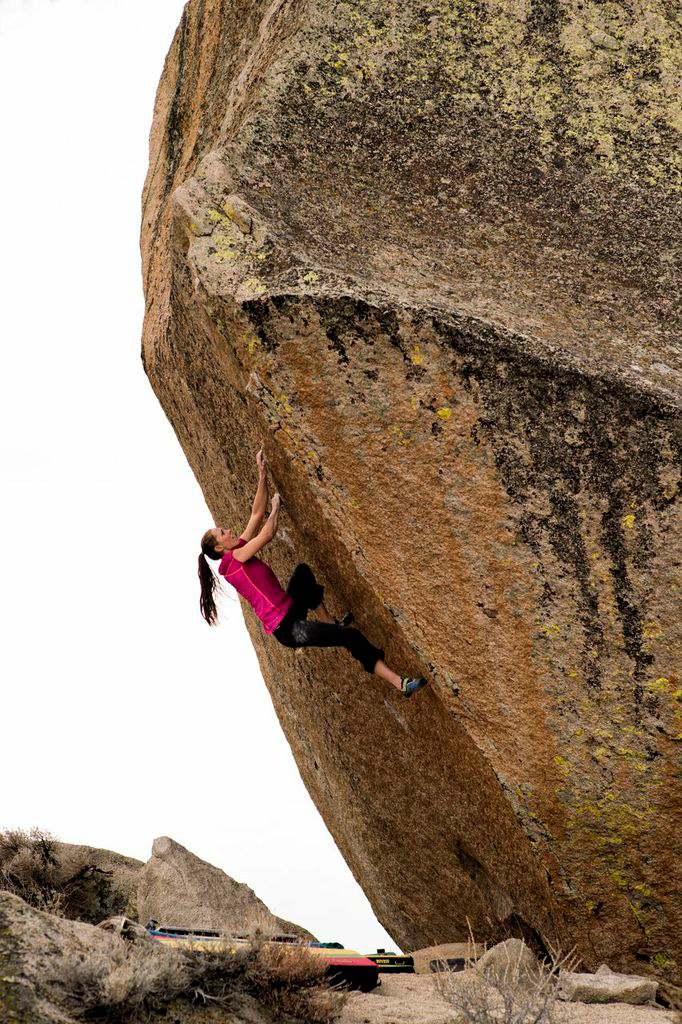 When I recently asked Johnson about the campaign, she put things into
a modern pro climber’s perspective.

“In the past, most climbers, even professional climbers, have had a tendency to want to keep their projects a secret for one reason or another, whether to try to prevent others from trying and possibly succeeding before you, or for fear of failing in the public eye,” wrote Johnson. “But in every other sport, big projects or ambitions are carefully planned out and shared so their fan base can follow along in real time and be a part of the celebration when that goal is accomplished.”

Johnson feels that creating media is a modern responsibility of today’s pro, though she says it’s ultimately up to each climber how they choose to go about marketing themselves.

“But from the perspective of a professional athlete, putting yourself out there is part of the job,” she wrote. “With the explosion of social media, we
have an obligation to the people and companies who support us to present ourselves in a way that is respectful and inspires others to live as we do.
I’ve chosen to do this by inviting others to follow me on my journey and be a part of my successes and failures.”

The failures, as Johnson points out, are also perhaps more intense for the modern pro rock jock. And Johnson knows first hand. After creating a successful media campaign that garnered thousands of fans, all following her mission to climb one of the countries hardest boulder problems, Johnson eventually … couldn’t pull it off.

“Failure is always a big possibility when projecting, and most people only have to answer to themselves and a few others if they don’t top out,” explained Johnson. “In the case of The Swarm, I had thousands of people to answer to, especially my sponsors.”

Failure and hard climbing have always gone hand-in-hand. However, today’s modern pro not only has to deal with the failure on a personal level, but also punts in front of thousands of fans. Ouch! I must admit I’d rather feel like Ben Moon after throwing in the towel on his infamous Kilnsey project in the 1990’s than Johnson after giving in to The Swarm with a swarm of fans attentively waiting for her success.

But Johnson will return, “as soon as the air in Bishop is crisp enough to crimp,” she says. And you can guarantee that the climbing world will be watching and following her attempts to #siegetheswarm.

And as for Sasha DiGiulian, the consummate modern professional rock climber, she already has a new story to tell.

“My new plan is to go to Switzerland and try Adam Ondra’s WoGü [a seven-pitch 5.14b in the Rätikon] and whatever other routes may be inspiring,”
she wrote. “I am going to go there probably with a film crew, find what route I am most passionate about, and try my best on it. What people will see as the end result is me pushing myself and trying hard, while also loving the experience!”