What’s the steepest rock climb in the world? It’s not in Kentucky, Colorado or Catalunya. The world-record roof climb is in the Sultanate of Oman about 62 miles southeast of Muscat. The route, Into the Light (13 pitches, 5.14a) wends its way through one of the largest known cave chambers, a spooky abyss called Majlis al Jinn—The Meeting Place of Genies.

The dimensions of the chamber are staggering. The floor has a surface area of 190,000 square feet and the volume of the chamber is somewhere around 13,000,000 cubic feet. Three holes in the ceiling provide the only access—a 500-foot, free-hanging rappel. Sun beams stream through the openings and illuminate the cave, providing ambient light. The chamber maintains a constant 63 degrees F, even when it’s over 100 outside on the desert floor.

I first got wind of the Into the Light project at last summer’s trade show when I ran into Chris Sharma and we spoke briefly about using removable
bolts to aid out roofs. He said he was meeting up with Stefan Glowacz in the desert to try and do a “really steep” multi-pitch climb. 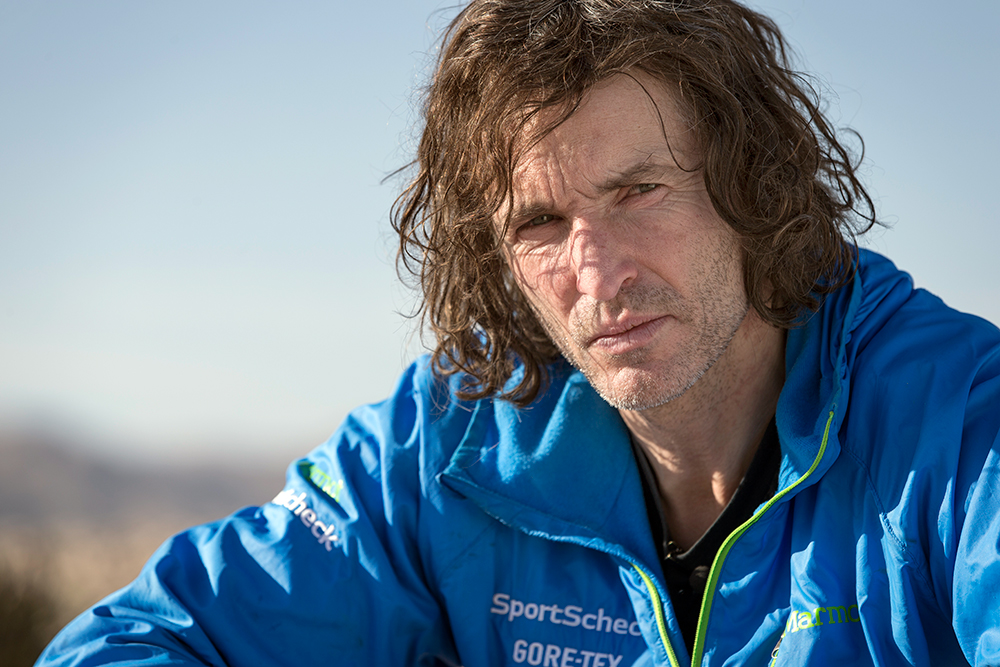 I didn’t have many details, but my interest was piqued. Glowacz, 50, is one of the most inspiring rock climbers of his generation, with comp wins and hard sport redpoints to his credit, but also trad big-wall first ascents in Greenland, Canada and on Mount Roraima. His first ascent of the 27-pitch North Wall of the Mullaron (5.13a A2 M4) in Patagonia was nominated for the Piolet d’Or in 2006. If he was teaming up with Sharma, I was sure it would be for something special.

The four videos (Check out Episode 4) documenting the trip made it clear that the location and climbing were amazing. And yet the videos were cryptic and left me with questions. For example, how in the heck did Glowacz and Sharma manage to bolt and send a 13-pitch roof in only two weeks? If you’ve ever tried to place bolts in steep overhangs you know that it’s wrenching work. Did they have a chiropractor traveling with them? Or, perhaps a crew of Omanis hired by Red Bull to set the route like Sherpa fixing line up Everest? Or were they really just that inspired, stalwart and bulletproof?

So I contacted Glowacz—since the climb had been his idea—and he was kind enough to shed some light on Into the Light.

R&I: How did you come up with the idea to climb in Majlis al Jinn?

A friend told me I should check out the cave. When I saw it, I knew I had to see if there were lines you could climb. I’ve climbed all kinds of walls but I’ve never climbed a cave. I found the idea fascinating—to lower yourself into the dark bowels of the earth and then try to climb back up into the light. And the Majlis al Jinn cave is simply breathtaking. It’s one of the most awe-inspiring places I’ve been to. When the idea took form I realized that the lines that seemed climbable would all be very hard, long and steep. No one has tried to climb the cave. Exactly the kind of challenge I like! 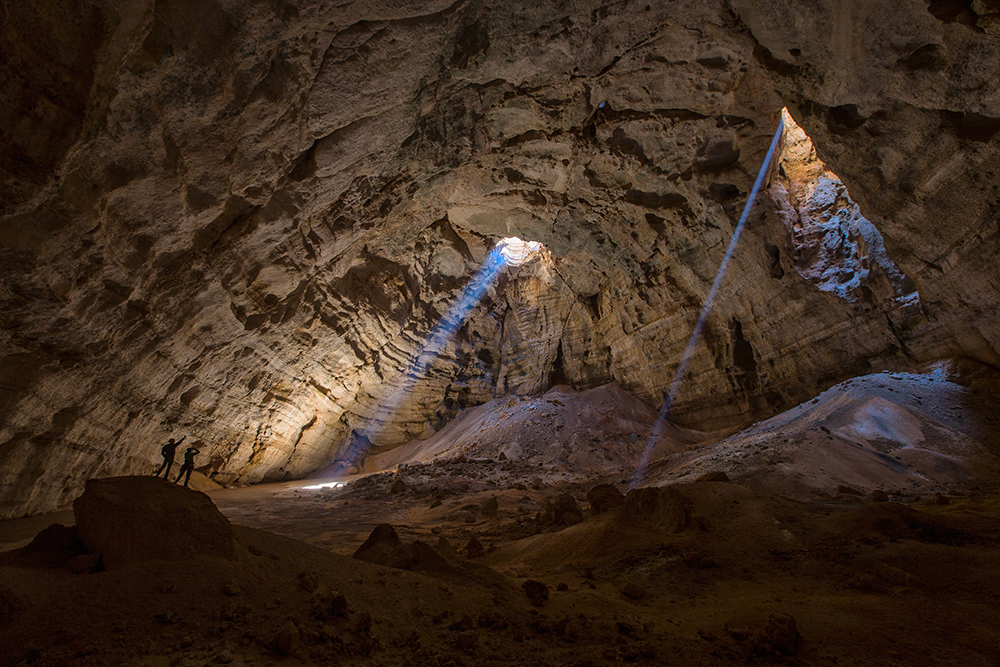 R&I:  What was the process for gaining permission to climb there?

Well, it was really nerve-racking. The whole process took about three-quarters of a year. The Sultanate of Oman is very strict about visiting the cave because they want to protect it. We had to follow very strict stipulations regarding protection of the environment, which, of course we were happy to comply with. Protecting where we climb is a sure thing for Chris and me, so it wasn’t a problem for us. We also had to explain how we’d ensure the safety of everyone involved. We had to describe how we’d set up the route and how we’d clean it. Stuff like that. But in the end it was worth it.

R&I: Describe the process of bolting a 13-pitch roof. Did you and Chris have help?

Of course we had a team with us. Cameramen. Belayers for the photographer etc. But Chris and I set the route. After having set quite a few routes in the past during my expeditions to South America, Baffin Island, Europe, I knew what we’d need and how we could probably do it. But we underestimated
the time it would take us. So it was pretty tough setting the route, climbing it, redpointing. Our strategy was to check out the moves and remember
them while setting the route so we could climb the pitches faster. It was really tough work! 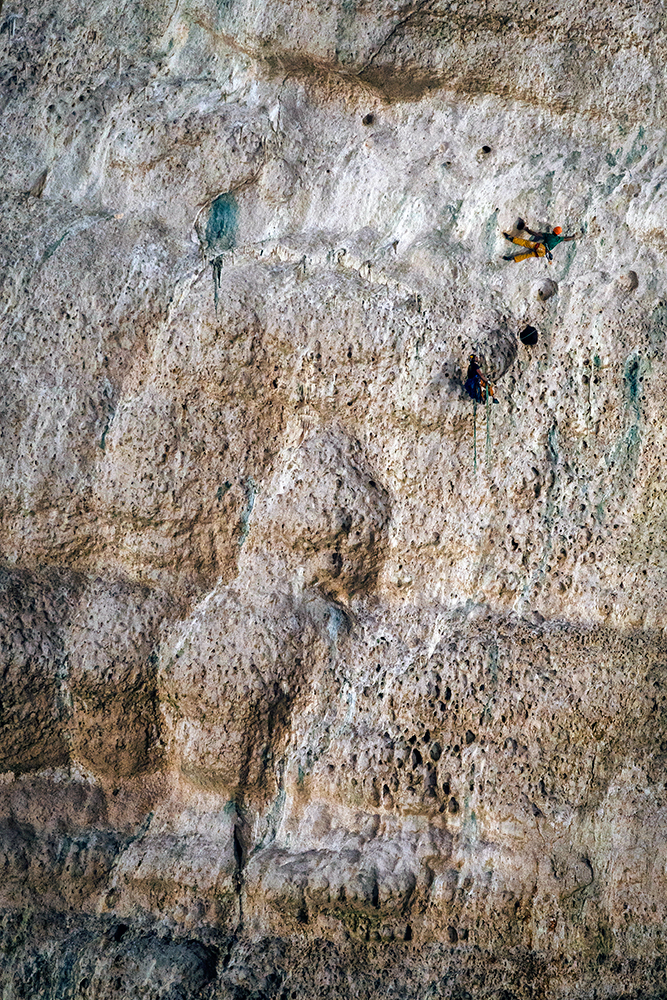 This route is really strange. Every single pitch is super steep and overhanging but in the middle of the roof there is a traverse we managed to climb with our trekking boots. We called it the
adventure hike . Overall the rock is good. We had to clean some pitches a bit but it was good to climb. The features range from sharp edges to
pockets to slopers. Basically you have everything a climber’s heart desires. It’s an amazing line.

The rock is limestone and of good quality. I mean, it’s not great but it’s good. You can’t really compare it. Climbing out of a cave is simply out
of this world.

R&I: Did you or Chris redpoint all the pitches?

Of course Chris was able to redpoint all the pitches. I had to leave the hard ones to Chris since I burned both my hands during a fall.

R&I: What grade was the hardest pitch? What about grades of the other pitches?

R&I: How many days did you spend scoping/bolting/working the route?

We worked the route for 14 days. We got up early every day, climbed every day. We couldn’t take rest days since the schedule was so tight. 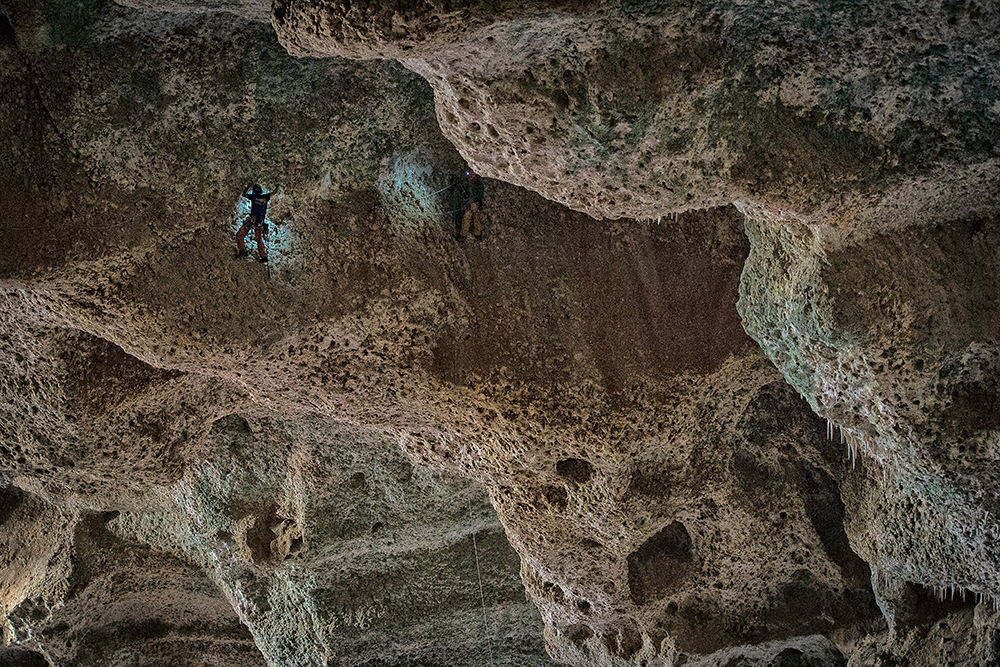 R&I: How did you hurt yourself? How did it affect your ability to do the climb? Are you OK?

When I was cleaning a pitch both jumars unhinged and I fell. I grabbed the rope instinctively and severely burned both my hands. The second I grabbed
that rope I thought, “Damn, you idiot!” When I felt the pain and saw my hands I thought that was it. We had a doctor with us, but with burns you
need time. There was nothing we could do. So we had the choice to cancel the project or just do it. I taped my hands, grit my teeth and we finished
our project. I didn’t want to let anybody down and Chris was totally motivating. I knew I wouldn’t be able to climb the hard pitches, but with
Chris as my partner, it was clear it could be done. So I taped my hands and let Chris climb the tough pitches. It was a great team effort. My hands
are healing OK. It just takes some time but there are worse things.

R&I: How did you wind up doing this with Chris?

I’ve met Chris a bunch of times at trade shows. We always had a great
connection and we share the same climbing philosophy. We’ve been talking about doing a project together for a while. When I saw the cave I knew
this was it. I called Chris and he was all for it. That’s how it started.

I was curious about the status of climbing in Majlis al Jinn so I contacted Glowacz. He was on the road, visiting one of his triplets in Canada, but his assistant, Dr. Nina Rebele, got back to me. She wrote: “A route topo is something we can’t provide since climbing in Majlis al Jinn is only allowed after following a very strict proposal scenario with the Sultan of Oman. It took us months and a hell of a lot of paper work to get permission to climb there. The cave is technically closed for climbing, but the Ministry of Tourism is trying to increase interest in travelling and climbing in Oman. Two bigger crags are already “officially” open and the Majlis al Jinn could be open for climbing in the future. We don’t know … ”