In 1960 Chuck Pratt and Yvon Chouinard climbed a new route on Middle Cathedral, in Yosemite, and were forced by darkness to bivouac on a ledge.

“I had shorts and a T-shirt on,” Chouinard recalls. “He had long pants and a sweatshirt. We were both freezing. In the middle of the night Pratt says,
‘Chouinard, I know this is going to disgust you, but if we don’t hug we’re going to die.’”

I originally heard a coconut-telephone version of that story from my friend Tom, who had a thematic variation of his own: of the time he persuaded a woman he liked to come climbing. The descent from their route was complex, he got lost, and they had to hunker down in the dark, both in shorts and T’s. She was so pissed and disgusted, he told me, that hugging for warmth was “out of the question.”

Duane Raleigh recently wrote in this space an essay entitled “Six Things Every Climber Should Do,” and one item I had not experienced, thank god, was benightment. Oh, I’ve stumbled down around midnight, by headlamp—or, much worse, without one—countless times. I got in at least that late from the aptly named Midnight Rock in Leavenworth, Washington—and a week later, obviously a slow learner, did it again. But I have never been stuck out all night. Yet.

A climber friend, Katie Kemble, has always said that someday she wants to compile a book of various accounts titled Silly Places I’ve Slept. There are a million stories by our brethren who have bivied unintentionally. Those are, for better or worse, times you really remember.

As Chouinard once put it: “It’s not an adventure until something goes wrong.”

Herewith, some tales—of cold and coping, hunger and the torturous pace of nights—from the bivy crypt. These are (mostly) the stories in which
we know, as Michael Ferrara of Aspen Mountain Rescue reflected one winter night after giving his sleeping bag to an injured skier, “I wouldn’t die, but it was going to suck to be me.” 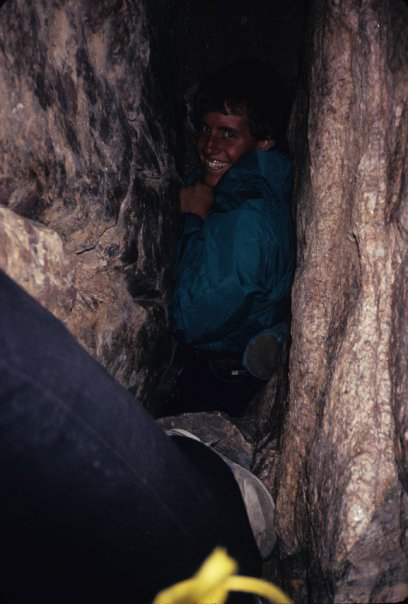 •
Barry Blanchard’s memoir The Calling (Patagonia Books) describes how he
and his friend Kevin “Wally” Doyle, both of Calgary, got benighted between bivy spots on the steep Salathé Wall of El Capitan. Barry emptied their haulbag and squatted in it, the wall beside him so overhung that only one shoulder touched. Wally sat in his butt bag, kneepads against the face. They were so tired they would fall asleep, but then their heads would drop, waking them.

Sometime in the night Barry announced, “I’m going to anchor my head to the wall.”

From Wally: “That’s a great idea.”

Hence they girth-hitched slings around their foreheads, and clipped themselves in.

Similarly, Russell Hooper and Tony Wilson, both from Oklahoma, were caught out on El Cap one night, and duct-taped their heads to the wall.

This next one is about venue—or, rather, location:

• Mike Pennings of Colorado and Jim Surette of New Hampshire, caught out by rain on Stratosfear (VI 5.11+ X) in the Black Canyon of the Gunnison,
spent the night in a chimney Surette calls “less wide than our shoulders.” Surette smeared his toes on the wall to keep from slipping down, and the
two “wedged some boulders to shim ourselves in there.”

On a surprise at the top:

• Sibylle Hechtel of Silverthorne, Colorado, once part of the first women’s team to climb El Cap, and Tom Dunwiddie had intended to climb the East Face of Mount Whitney, California, when they were tempted by another line,  a great-looking crack and chimney system. Eventually overtaken by darkness, they sat on a ledge and tried to nap, but got too cold. When the moon rose, they climbed on.

She recalls, “Sometime in the middle of the night, we crested the summit to find a large group of hippies sitting on the summit waiting for the sunrise.
They weren’t sure if we were real or a hallucination.”

On hunger and how sound travels:

• A climber from the Idaho Outdoors Forum appears on network54.com, writing about being stuck on top of the 15-pitch 5.9 Royal Arches in Yosemite after completing the last pitch in the dark. The poster mainly remembers his or her stomach growling, and this: “On this crystal clear, absolutely still night we could clearly hear diners’ conversations 1000 feet below as they left the deluxe Ahwahnee lodge and discussed their gourmet dinners.” 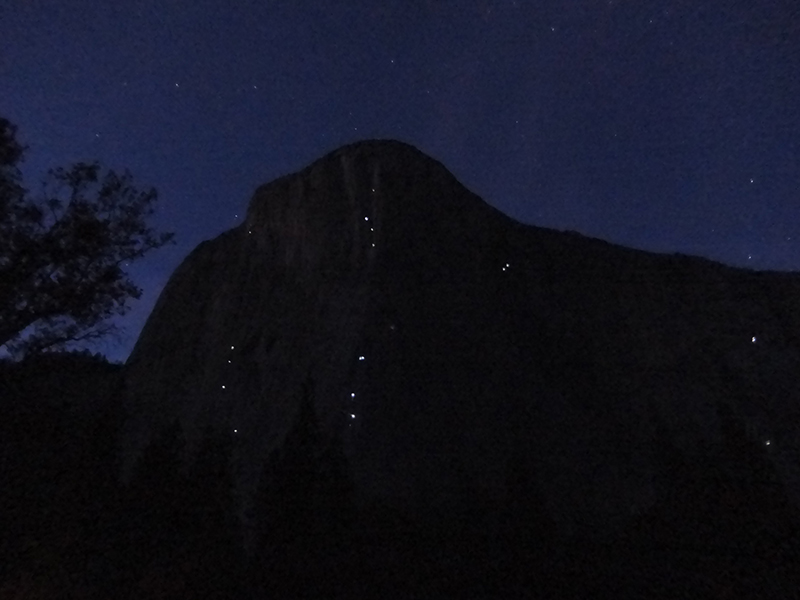 Which was worse, the hunger or cold?

• Tracy Martin of Asheville, North Carolina, and Dave Pegg of New Castle, Colorado, were experienced trad climbers when they embarked on the Diamond Face of Long’s Peak, Rocky Mountain National Park, Colorado, and hit trouble on their descent.

“The rope got stuck on the first rappel,” she says. “That bitch-ass piece of plastic on the end of the rope got caught between the rock and a moss pad.

“I’d like to give a big shout out to the climbers that left the can of fruit cocktail on Broadway”—where the two sat on their rope. “That was the
best dinner I ever had.” Luckily, they’d packed a knife and could open the can.

In the night, she says, she would shiver herself to sleep and then shiver awake. “It was a cold miserable night, but the sunrise was amazing.” Overall, the cold was worse than the hunger: “The cold might have been tied with hunger without the fruit cocktail.”

On an ounce of preparation:

• Long ago Russ Clune of New Paltz, New York, climbed the 10-pitch Astroman (IV 5.11c) in Yosemite with the British climber Pete Thexton. Before they left in the morning, Pete saw Russ slip a small pack of matches into his pocket, and scoffed, “What’re you bringing those for?”

“Never you mind,” Russ said—and they used them. 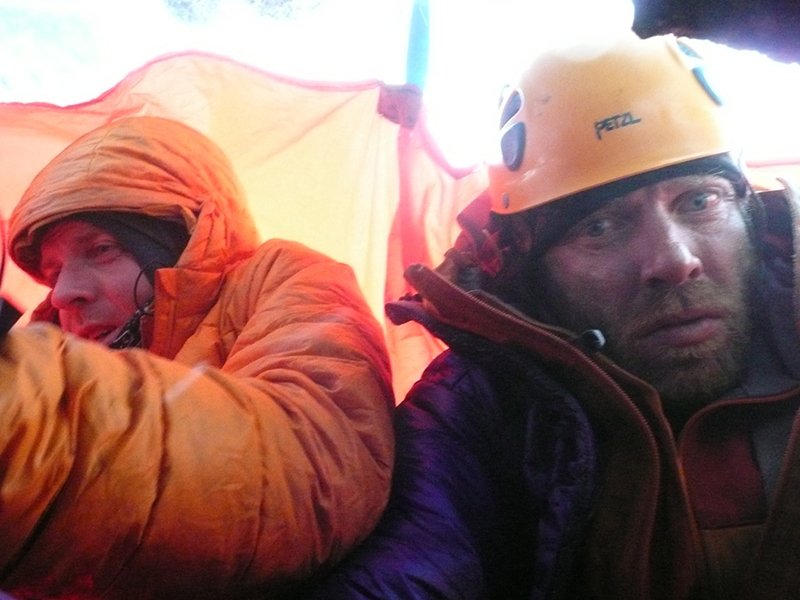 On the slow passage of time:

• Todd Gordon of Joshua Tree, California, once read in the book Fifty Classic Climbs of North America that experienced sandstone climbers could handily do the Finger of Fate route on the Titan, Fisher Towers, in a day.

You know what’s coming. He and two friends spent that cold November night, in the wind, in thin cotton clothes that engendered “varsity suffering.”

“I curl up in the fetal position,” his blog account reads, “and after many hours of violent teeth chattering, I’m convinced that I’ve cracked my teeth.” No one slept. “The nighttime conversation consisted of various grumblings, outbursts of profanity and different estimations of what hour we thought it was.”

• Three brothers from California once got stuck on a runout face climb on Tahquitz, near Idyllwild, and as time crawled by would ask each other, “How much would you pay for a rescue now?”

As the youngest brother, who spent the night on his lead in a depression on a 5.9 face, later told friends, “Each hour it was hundreds of dollars more.”

• From Gary Clark, describing a forced bivy on Mount Fairweather, Alaska, as posted on lamountaineers.org:

“Dave’s toes [are] beginning finally to communicate with his brain as they warm against my stomach, but turning white all the same. I think of Rebuffat.
I think of Wickwire on K2, Unsoeld and Hornbein on Everest. I think of the sleeping pads and goose down sleeping bags and stoves and food down at the tent. There is plenty of time to think.”

• John Middendorf, in a tale of suffering—on the South Face of Half Dome, in typhoon winds and a violent blizzard—that is too awful to be described
in this context (read his great “Rescue on Half Dome”), passed time by counting, in sets of 100, to 22,000.

“Eventually I told myself that many hours must have passed. I looked at my watch. It was only 10 p.m.”

This next one isn’t climbing, but ski mountaineering with a good outcome:

• When Colorado’s Clare Bastable and Josh Hmielowski got benighted in a horrendous snowstorm trying to reach a hut near Taylor Pass, they dug a snow cave.

“The first night wasn’t too bad,” Clare says. But the second one … was.

Anyone have, or have you heard, any good bivy stories?