Last week, we reprinted a feature from Ascent 2011 titled “Climbing Deal Breakers.” The piece is basically a list of idiosyncratic habits of climbers that the author—well known climbing lifer and writer Jonathan Thesenga—feels are utterly pointless and/or lame. Take, for instance, the first deal breaker on the list: Topropes with Extraneous Gear on their Harness.

“You don’t need an ATC, belay gloves, nut tool, and/or random single locker for toproping,” writes JT. “What the hell are you going to use any of that stuff for? Double-negative if you’re in the climbing gym.”

I must admit, JT has a point. There is no reason why a climber would need a nut tool in the gym, much less have one swinging from the gear loop of his
or her harness while toproping plastic. Yet, many readers took major offense to JT’s satirical list. The comments poured in, and most attacked JT for his “judgmental” attitude. One commenter even defended her nut tool toting, writing, “apparently I’m a ‘deal breaker’—my nut tool is taped to
my harness … I’m sorry I’m not going to take it off just because I’m climbing in the gym … haha!”

I’m still not exactly sure how she uses that nut tool—whether she’s in the gym or not. I can only picture awkward scenarios as she fumbles to free
the tool and wrestle with a stubborn Stopper. “Just a minute, my nut tool is stuck, too!”

It seems that many climbers took offense if they themselves felt attacked. And though the author, in his introduction, wrote that the piece wasn’t intended to be “mean spirited,” it’s clear that many readers felt that it was a mean-spirited, personal attack.

The point of JT’s article, however, seemed to be forgotten in the online hullabaloo. The truth is, we all have climbing deal breakers.

Ironically, the biggest attacks emanated from the comments. Many readers unloaded on JT. Werner Goetz, for example, went a step further and lumped all climbing writers together, explaining that we are all “d-bags” that will “spend all day warming up by flailing on the low-grade ‘classics’ all the while trying to figure out how to turn a mediocre experience into a story about their latest epic.”

The point of JT’s article, however, seemed to be forgotten in the online hullabaloo. The truth is, we all have climbing deal breakers. The list, compiled by one of the most die-hard, prolific and dedicated climbers I’ve ever met, was actually meant to be inclusive. Think about it. If you seriously
do not or have not made one of these “deal breakers,” then you probably aren’t climbing enough. The author himself makes the list multiple times. If
you don’t believe me, then check this out.

For example, I recently discovered what I now consider my favorite climbing deal breaker of all time. And although this particular CDB didn’t make JT’s list, it should have. 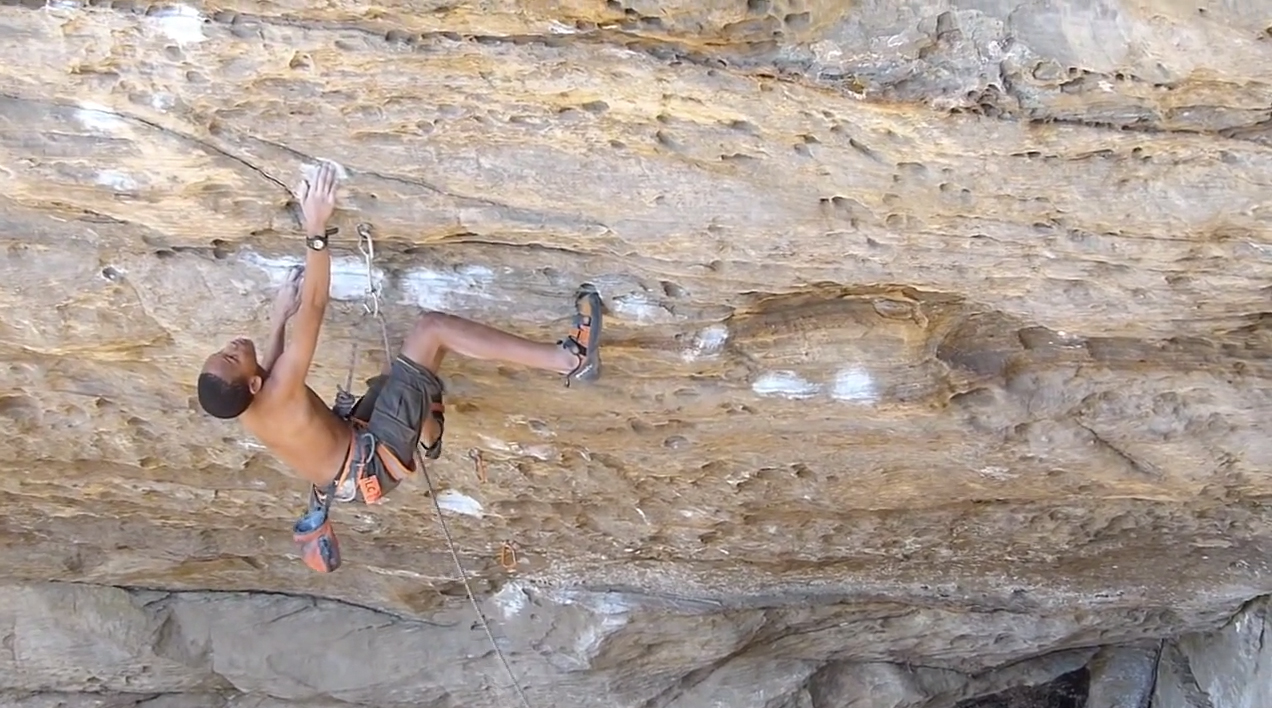 The culprit? A 14-year-old 5.14 “crusher” (a CDB word), named Kai Lightner. While researching a story I recently wrote about Lightner sending Lucifer (5.14c) in the Red River Gorge, I stumbled across a video of him
climbing his first 5.14c—the Red’s steep Southern Smoke. The ascent is astounding to me for multiple reasons. One is because Kai was only 13-years-old. Even more impressive is the fact that a few months after sending Southern Smoke, Kai told Rock and Ice in an interview (Spotlight No. 212) that climbing outside once a year was “a lot.

And that might explain the glaring CDB I noticed hanging on Kai’s harness while he slowly and seemingly effortlessly flowed through the moves of the 5.14c. I paused the video, blinked, and sure enough, there it was—a laminated card dangling like a dingleberry from his gear loop.

I immediately e-mailed Kai to confirm what I suspected:

Quick question, what is hanging on your harness in this video?

To which he responded:

It’s my Stone Summit lead cert tag. Never thought to take it off.

That’s right. Kai Lightner climbed a 5.14c—and made it look piss-easy I might add—with his gym’s lead belay certification card swinging around
on his harness.

That has to be the Coolest Deal Breaker of all time.