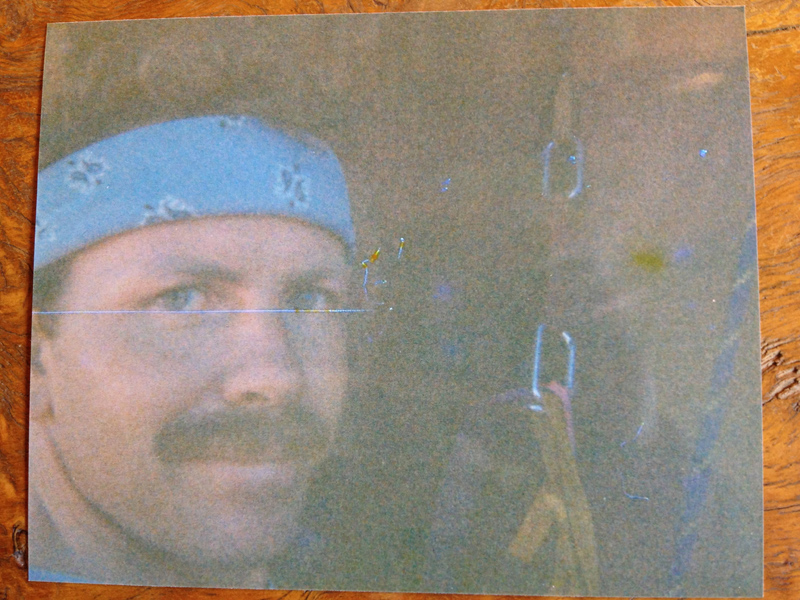 An old mystery deepened a few weeks ago
when Tim Mutrie, a skier-climber from the Aspen area, posted a photo on Facebook and asked, “What’s the story with this gear?”

Ten years ago, while working as a reporter for the Aspen Times, Tim stumbled upon a dusty old backpack filled with gear in a back closet of the office building.

“Being allergic to dust, I never fully inventoried its contents,” he wrote recently. “I never forgot about it, either.”

When Tim heard this spring that the old Aspen Times building was about to be demolished, he trekked over, retrieved the old backpack, and appointed
himself volunteer curator.

The gear photo he posted online showed a battered purple Karrimor, a set of aiders, various small and huge hexes, some big chocks, a few brass RP nuts, and some mondo Tricams. Also a prusik sling, knife and chalk bag, some old water bottles and a camera. Some gloves, tape, a first-aid kit. A yellow tin of Carmex. And a Snickers-bar wrapper. Tim noted that the building had also hosted Climbing magazine, with staffs including Michael Kennedy, Bil Dunaway, Fritz Stammberger (a climber-ski mountaineer who long ago
disappeared in the Himalaya in his own mystery) and various others. The pack might have, Mutrie suggested, local historic significance.

Meanwhile he showed the photo to Neal Beidleman, a local climber-runner, and told him some of the carabiners were marked with the initials “J.M.”

At first Neal thought the pack might belong to a local named John Matson, but one email dispelled that notion.

Online readers responded to Tim’s FB post, inspiring him to more detail: “[One item] looks to me like an early cam—it’s spring action, but single/one-direction
action only. Appears to me to be manufactured. Chalk bag is Climb High brand (Burlington, VT) and the knife is a Schrade brand ‘Uncle Henry’ model—very
sharp.”

Meanwhile, Neal contacted Mike Benge, my spouse, who didn’t recall anything about the pack, but mentioned it to me. We had both long ago worked for Climbing magazine in
the warren-like maze of offices in the Aspen Times.

On Moses, we four reached the summit platform, with its gigantic desert views, and on which sat a lone pack. I found the sight rather creepy, and looked
around nervously for a body.

I stared at him. “Mike, we found that pack. On top of Moses!”

In November of 1988, I had recently moved to Colorado and he and I, with our friends Michael Dorsey and Keith Gotschall, climbed the 600-foot tower Moses
in the Utah Canyonlands, via the classic Ed Webster route Primrose Dihedrals. This was a dream for me, having first heard of Moses as an 18-year-old
freshman just learning to toprope the local slabs near Middlebury College in far Vermont, when Dave Gustafson, a mighty junior, climbed the route over
spring break. Having spent my vacations at home in mid-Atlantic Maryland, I could hardly imagine seeing a desert tower, let alone having the experience
to climb it.

On Moses, we four reached the summit platform, with its gigantic desert views. Atop Moses sat a lone pack. I found the sight rather creepy, and looked
around nervously for a body.

I also couldn’t understand how anyone could just leave a full pack behind, though after awhile began to think that maybe he or she arrived tired, took
in the view, and just spaced it (especially if enjoying a smoke).

Since much of the gear was wide, I guessed that the pack might have been left after an ascent of the five-pitch Dunn Route (5.11a), established
in 1973 by Jimmie Dunn et al on the north face. That route has some wide sections.

Mike and I brought the pack home, and ran classified ads in Climbing  for months looking for the owner. Time passed and every now and then
I wondered about that pack, and once I even asked where it was, but mostly we forgot all about it. 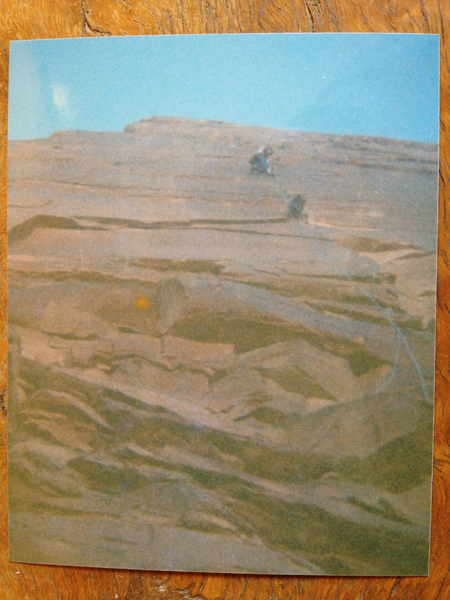 Mike went onto Tim’s FB page: “Mystery solved! Alison and I found that pack on top of Moses
circa 1988. We placed ads in Climbing and no one ever claimed it. Crazy.”

Another local, Eric Lovely, corrected him: “So the mystery is only half solved?”

Meanwhile, Tim consulted his “photo forensics team” (an old friend and Aspen Times photographer ) for help in developing the film, and widened
the search for the pack owner, formerly thought to be local.

Wondering about a J.M. who might have climbed Moses in 1988, Tim and Neal came up with the name John Middendorf, a good suggestion. Tim had earlier considered
Jake MacNelly, a young Aspen Times employee who died in an area climbing accident in 1996, but now knew we had found it before then. All I
could think of was J.M. Barrie, the tortured soul who wrote Peter Pan, so that was no help.

Just this week I received these photos from Tim, who noted, “I figured we’d be lucky to get anything intelligible at all, so I was cracking up to see that
we got a face (Magnum PI’s brother was a climber, apparently!), and a shot of the route they presumably climbed that day.” 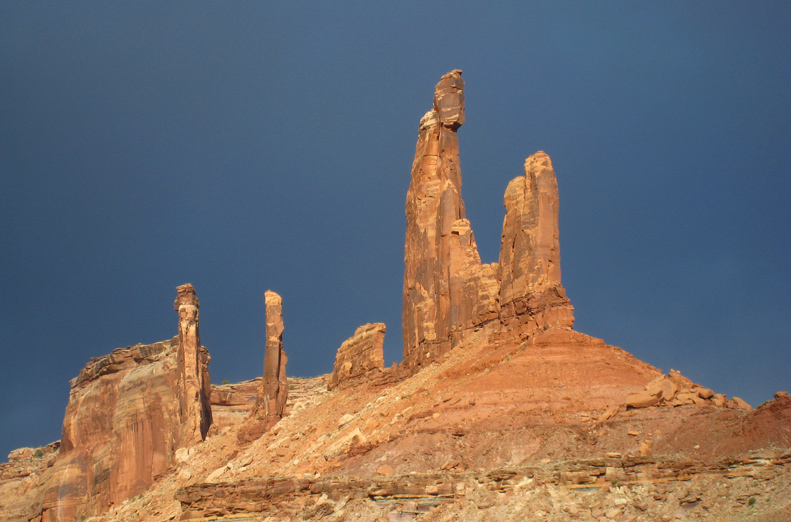 The developer had inserted a stock note stating that the images were “off color because the
film used was old or affected by heat or humidity, or left in the camera too long after exposure.”

But there was a face, a discernible face. Of Magnum PI’s brother, or somebody that someone out there among you knows. Who is he?

The route in these photos matches up with shots of Pale Fire, a four-pitch 5.12 by Chip Chace and Charlie Fowler on the northwest face in 1981.
It looks as if three people climbed it together that day. One of them might be very psyched to get his pack back after all this time.

My only suggestion is that Tim be allowed to keep the Schrade pocketknife. He likes it.