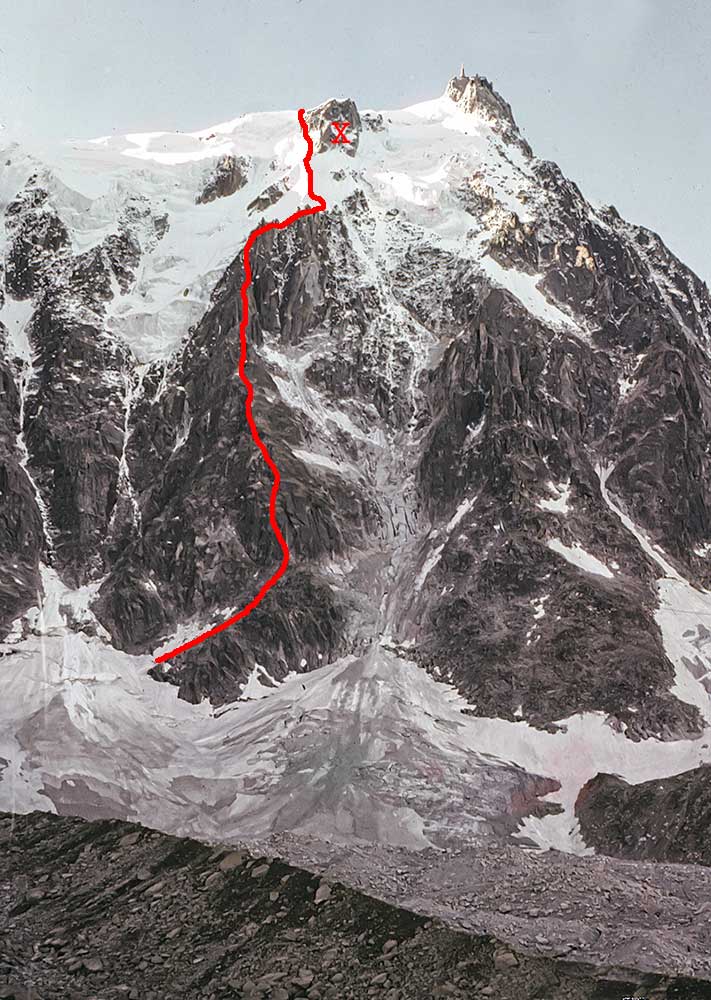 “Have I overstated my abilities?”

This is the question Emelie Forsberg posed to herself on her blog emeliefosberg.com
after she and Kilian Jornet were rescued on September 7 from the Frendo Spur above Chamonix, France. The duo literally ran into trouble attempting the 1940-era alpine route when they
applied their fast-and-light “skyrunning” approach to a big technical climb.

Jornet and Forsberg are elite endurance athletes, winners of Skyrunning Ultra titles, and climbers of varying technical experience. This summer, Jornet
ran up and down the Matterhorn in 2:52 and made a round trip up Mont Blanc in 4:57, both records. Last year he got on the climbing radar when he speed soloed (8:43) the Innominata, an intricate and hazardous alpine
route that begins on the Italian side of Mont Blanc and descends to Chamonix. Competent teams can take two days.

The Frendo was to be just another day’s romp for Jornet, who had twice soloed the route, and Forsberg, a “hobby” climber by her own admission
but who said she thought the climb was within her skill set. Expecting to be up and down the route in half a day, the pair dressed lightly, carried
down jackets and wore running shoes or “trainers.” Contrary to some reports, they did carry two ice axes each, crampons and ice screws, necessary equipment
to negotiate lengthy sections of unavoidable snow and ice, although their floppy footwear would have made any substantial section of steep ice hazardous
at a minimum. They also had a rock rack. They did not pack bivy or storm gear.

Anyone who has been to Chamonix on a clear day has seen the Frendo. The striking climbing objective towers over the village of 9,000 like a headstone.
The 3,600-foot spur of ice and rock traces a pure line up the north face of the Aiguille du Midi, a 12,605-foot satellite of Mont Blanc. The Frendois
low-hanging fruit for alpinists: A cable car transports you to the base and delivers you back to town from the summit. Access doesn’t get any more
civilized short of a helicopter.

Although the Frendo is only 5.8 and much of the mixed climbing is low-angle snow, it is loose and long, and the proper line has ice up to 70 degrees
with more exposure than many BASE jumps. The route has been the scene of much tragedy. In June 2011, two British climbers became stranded on theFrendoduring
a storm. One died before a rescue team reached them two days later. In July that same year, two other British climbers slid to their deaths from the
knife-edge snow ridge at two-thirds height. Also that July, the Frendo claimed the lives of two Swiss climbers. 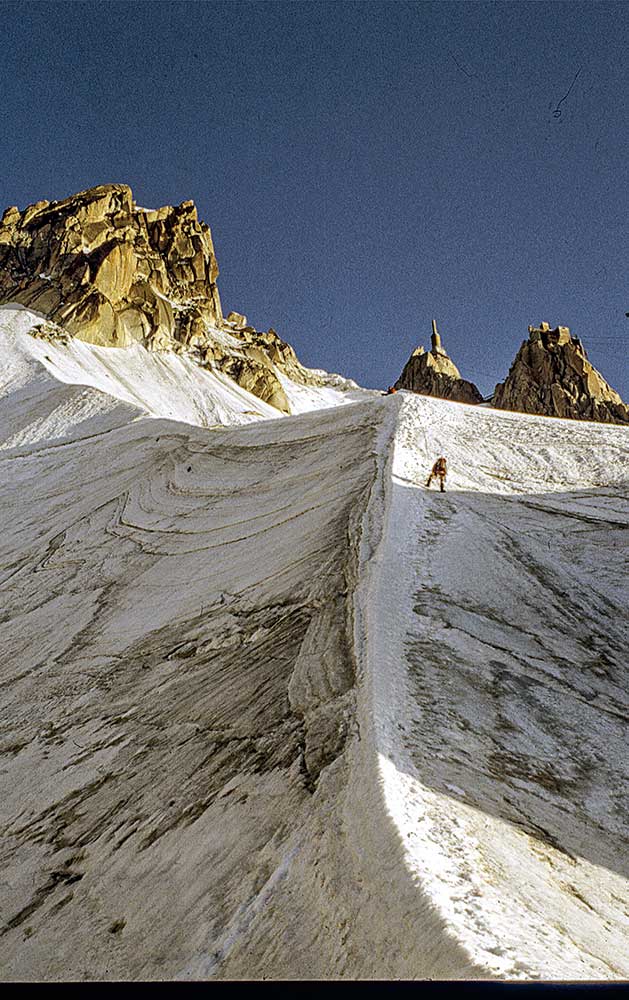 Jornet
and Forsberg set out in good weather with a storm forecast to roll in by 5 p.m.

The two roped up at 9 a.m. and by noon arrived at the finale obstacle, a steep granite buttress. Typically, climbers in mountaineering boots avoid the
rock and venture left onto a 70-degree ice face. Forsberg and Jornet, lightly shod, had planned to thread their way up one of the buttress’s rock variations.
It was here that things went awry. Forsberg, in the lead, got off route and spent three to four hours trying to get on track. During the delay the
two were engulfed in a storm. Cold, stressed and feeling stranded, Forsberg says she “couldn’t focus my thought very well.”

She and Jornet discussed the situation and decided that it was too risky for them in their light gear to wait out the storm. They phoned for a rescue.
According to Jornet, they were prepared to rappel the route if necessary, an unsavory
proposition in a storm with night looming, a small rack, one rope and three thousand feet of mostly loose rock to negotiate. Four hours later, PGHM,
the Chamonix-based rescue team, roped down to the frosty climbers and helped them to the summit and awaiting cable car.

Forsberg publicly thanked the PGHM for pulling her off the face, but said that she wished her rescuers “could have given us an estimated time of arrival.”
Oh her blog, she said that she and Jornet “underestimated the conditions” and had no Plan B. Jornet said that he was negligent for not being prepared
for bad weather, and that even when you prepare one must be “humble in the mountains.”

The public reaction to Jornet and Forsberg’s rescue is mixed. Critics natter on that the climbers recklessly put their rescuer’s lives at risk. Chamonix
guide and head of rescue Jean-Louis Verdier said that he was angry to “see the continued rise of running shoes [used on technical alpine routes] despite
our prevention messages.” Other people support Jornet and Forsberg’s style, and chalk up their ordeal as one of those things that just happens when
you are pushing the envelope.

This latter point is contested yet largely historically accepted as the price of doing business. When Messner climbed Everest without supplemental oxygen
in 1978 and when he returned to solo it without oxygen in 1980 critics said he was reckless. So, should have carried oxygen just in case? What about
Alex Honnold? Should he carry a rope, harness and rack on his solos? Climbers routinely go into the mountains or onto big cliffs with what could be
judged as inadequate gear. They rely instead on ability, and usually pull it off.

For Forsberg—a relative novice alpine climber compared to Jornet—to question whether she had overestimated her abilities is reasonable. Clearly,
she had. Yet confidence is what pushes us to try and get up over the next ladder rung. It is fundamental to growth.

The danger and mixed message I see is in Forsberg’s final statement. She says that she made a mistake and learned a lesson, but then says that fast and
light is “still the way I love to be in the mountains.”

The climbing around Chamonix and other European mountain theaters is unlike almost anywhere else. The mountains are blanketed with cell-phone coverage
and highly skilled rescue teams with specialized helicopters are on constant stand by. As I noted earlier, the Frendo even has cable-car access.
It would be easy in this situation to underestimate the seriousness of the mountains, rely too heavily on the support infrastructure. In the early
1970s Messner chided climbers for carrying their courage (a bolt kit) in their rucksack. Today’s courage is a cellphone. With it, you can skimp on
gear or even try routes well beyond your skills and experience. If you get into trouble, or merely become tired or uncomfortable, help is a few push
buttons away. In August, two Dutch climbers complained of exhaustion on Little Goell peak in Austria and summoned a helicopter rescue. Those “climbers”
were lucky to get off with a $3,000 fine plus court costs.

In February, two climbers trapped in a storm high on Les Droites near Chamonix died because in the adverse conditions it took rescuers four days to reach them.

On the Frendo this September, the rescue helicopter was grounded by the weather and the PGHM had to ride the cable car to the top of the Midi,
then rappel to Jornet and Forsberg—the four-hour delay that Forsberg complained about. Without a phone, it is unlikely the climbers could have
summoned a rescue. Without the tram, rescuers wouldn’t have reached the climbers until the next day. Without a capable rescue team Jornet and Forsberg
would have been entirely on their own. Would they have survived? If not, their names would have been added to a lengthy list of the route’s victims.
Hardly the record they might have been looking for.