When Ken Murphy soloed up an overhanging route to help a climber in
a dire situation, he said, climbing “never felt so easy.”

“It was like I was floating. That life-or-death, mother-saving-the-baby-thing.”

As described in an Accident Report in Rock and Ice issue 223 (January 2015), on September 3, 2014, Murphy, age 30, of New Paltz, New York, had
just finished the 5.12c El Kabong in the Near Trapps of the Gunks when he heard someone shouting for help. Running 100 yards along the cliff base in his rock shoes, he spied a man hanging 60 feet in the air near the jutting roofs of Fat City (5.10), about to rap off the ends of his rope, barely able to
hang on. He had not tied a knot in the end of the rappel rope.

“One side of his rope was three inches from his ATC,” Murphy says, “and the other side was an inch or maybe less.”

When Murphy called up that he would run back for his gear and lead up to help, the climber (who does not wish to be named) said, “I don’t have time for that.”

Says Murphy, “I realized he didn’t have time. I made the decision unconsciously. That and the next minute were instinctual. He didn’t have time, and I had to get up to him and try to help him.

“I just started climbing instantly. Brain off. And I was climbing fast. I probably made it to him in 30 seconds or less.”

Murphy felt perfect soloing the 5.10a moves over the first roof on Fat City. He knew the area rock, had just climbed the route a few days before,
and was zoned in.

Reaching a 5.6-5.7 stance with good holds, Murphy saw no spot to place the one cam hanging on his harness. He also saw the man shaking and “just about to fall off.”

He grabbed a jug with one hand. “I’m gonna grab your foot,” he told the victim, “and swing you in a little, grab you by the harness, and pull you in, and you grab the rock. Don’t pull me off, please don’t pull me off.”

He flicked or whipped the man outward, then flung him into the rock. The climber grabbed two holds, Murphy latched his harness, and the rope zinged away out of the ATC. Both climbers stood on the wall with no rope. Then they climbed 10 feet higher to a ledge with a piton, and waited while Murphy’s partner Mike Cohn led up to reach the ledge and lower both off.

Here’s a crazy background fact not in the Accident Report. Murphy weighs about 140 pounds and the victim close to 200.

Wasn’t it possible, I ask him on the phone, that the victim, heavier and in terror, could have pulled him off?

Murphy says calmly, “Nothing could have pulled me off that jug.”

Murphy was apparently in the mode described as hysterical or superhuman strength, occurring in situations perceived as do-or-die. While little medical information exists about the cases, we periodically hear stories of people performing acts they could not normally do or, later, repeat. Anecdotal examples are usually of mothers lifting cars to save children. I read of two slim teenage girls in Oregon lifting a tractor off their father, and a 5’2” woman in Massachusetts hoisting an approximately 4,000-pound Dodge five inches off the suspension after it fell on her husband.

Says Murphy, “I was adrenalized, with a great sense of purpose. I never once thought about it and got scared or was shaking: not during it, not after.
I did what I had to do. I would do it again.” 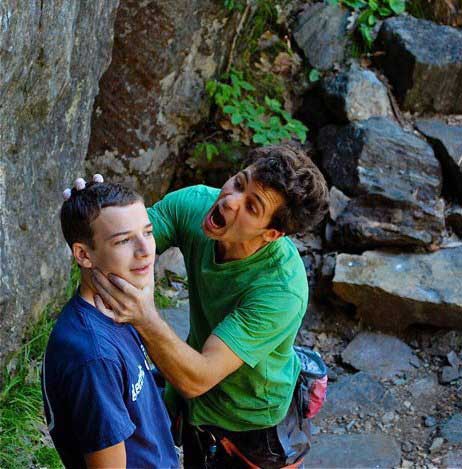 Jeff
Wise writes in Extreme Fear: The Science of Your Mind in Danger, that fear “releases reserves of energy that normally remain inaccessible.
We become, in effect, superhuman.

“Under acute stress, the body’s sympathetic nervous system prepares …. The adrenal gland dumps cortisol and adrenaline into the blood stream. Blood pressure surges and the heart races, delivering oxygen and energy to the muscles.”

People under such pressure still have their limits, but an athlete has a greater capacity than the next person. Wise cites the case of Tom Boyle, Jr., who lifted a Camaro that had run over a teenager: “The heaviest barbell that Boyle ever dead-lifted weighed 700 pounds. The world record is 1,008 pounds. A stock Camaro weighs 3,000 pounds. Even factoring leverage, something extraordinary was going on.”

It helped, Wise points out, that Boyle was an experienced weight-lifter. NBCNews.com reported that a doctor who ripped a door off a car to help an
accident victim was a “former world-class weightlifter.” The victim in the Gunks was lucky: that Murphy was filled with resolution, and that
he knew the area rock and was a top climber.

Murphy’s instinctiveness reminded me of the long-ago tale of Jerry Schemmel, 29, a Denver Nuggets radio broadcaster
who survived the 1989 cartwheeling crash of United Airlines Flight 232 near Sioux City, Iowa.

In chaos and smoke, he climbed out from the upside-down cabin into a cornfield.

“I took a couple steps away and I heard a baby crying inside the plane,” he said in a filmed interview later. “The next thing I know I’m back inside the
wreckage. I didn’t think about it, I didn’t weigh any risk. I didn’t think if I go back in the thing I might not find my way back out or it might explode.
It just happened. I heard the crying and I just jumped back in.”

He crawled around, found the 11-month-old where she had landed in an overhead bin, and carried her out. Her parents and two brothers also survived.

Murphy, when he had a chance to reflect, questioned the wisdom of his actions (his mother, he says, was “not thrilled”), but returned to a sense of fulfillment.

The victim gratefully thanked Murphy, and later told him on the phone, “I would have left a daughter behind.”

Murphy reflects, “One mistake and all of a sudden you’re not in this world anymore. I’m very happy I was there that day. All the stars lined up.”

Please share other tales of instinct and survival! To submit an epic, email aosius@bigstonepub.com