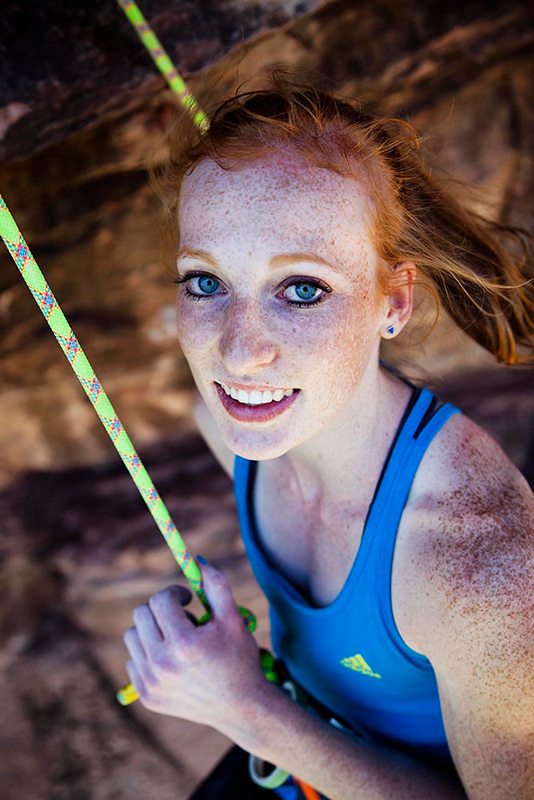 Delaney Miller is a sweet spirit, and she had just turned 18 and graduated
from high school when she arrived at our Rock and Ice photo camp this summer. You might have seen her recently at the Psicobloc competition
in Park City–a force, climbing 5.13c two and a half times in quick succession, coming in second only to Sasha DiGiulian.

“Hey, Alison, would you belay Delaney on that cobble route?” Duane, our publisher and the head of the photo camp, asked.

Sure. As a belayer and de facto safety officer for the camp, I had been belaying the psyched, quietly tenacious 5’4” Delaney for two days on the looming
Redstein, high above the alpine hamlet of Redstone, Colorado.

“You’ll need your shoes,” he said, “to climb back out. The ledge is halfway down the wall,” meaning the sector below us.

Oh, shit! It was about 800 degrees–I’d kept apologizing to all the photo-camp athlete/models (especially Sonnie from cool far Canada) about the heat, smothering
us in a wave very atypical for the region—and I had just that moment wiped my hands as, crouched in the slim band of shade lining the long ledge
stretched above the Second Band, I finished my catered lunch. Out of inertia, I’d eaten most of it.

“Oh, 11c,” he said. Well, I figured, that should be OK, though I’d rather warm up on something easier. Oh. Wait. I just remembered. Duane is a horrible sandbagger.

“How hard?” I asked again, suspiciously.

“Eleven-c,” he said again, as blandly.

Delaney, from Frisco, Texas, had practically never climbed outside, mostly training in her gym in Dallas under the tutelage of Kim Puccio, mother of strong,
strong Alex. Yet Delaney, the reigning SCS national champion, adapted easily to real rock. She was also photogenic, Titian-haired and with sculpted
features below huge flecked blue eyes emphasized by deft touches of kohl and gold. A thoughtful person, and polite. Every time I belayed Delaney as
she climbed for the aspirant photographers attending the camp, who jumared daily into the sky above the Crystal River Valley, she thanked me.

She called me Alice. I corrected her once, but gave up, not wanting to make her feel bad. I took a mentoring and maternal (I have teenage children) interest
in Delaney, both as a young female talent and inexperienced in outdoor climbing: joked about being her personal belayer, pestered her to stay trammed
into our guidelines (mainly lest anyone knock any cobbles down from above) on the long ledge; asked if she brought sunscreen.

I dug for my shoes, apparently looking generally doubtful, because my coworker Andrew Bisharat offered, “Hey, Alison, I can do it if you want.”

But I demurred, which was dumb. Soft-spoken Delaney and I rapped to the belay and arranged ourselves, me quickly checking her tie-ins.

She had asked me if I climbed; I’d said yes. Now I asked if she had ever belayed someone seconding up a rock pitch. No, she said, “but I’m a quick study.”

Then she started up, and as I wormed my feet around, half removing my hot climbing shoes, she suddenly—leaning across the void between the adjacent
wall and the rock bulge above my head—whispered hoarsely, “Watch me.” She palmed an awkward round horizontal, eked toward a far quartzy jug.
Chugging her breaths, she jabbed her right foot at a cobble, and swung slowly outward onto the jug as she committed her full 90some pounds to it.

I paid out rope as Delaney gingerly worked her way up the pitch, its top section of sun-blasted cobbles lit up in view of the peanut gallery on the long
ledge.

She called down off-belay; and I took her off, waited. The rope reeled in and voices from along the ledge told me I was on.

I started up the wall, leaned over the void, pawed at the hand jug, thinking, I’ll rip my shoulder off if I swing onto that. Wondering how sweet,
light Delaney was doing on that belay up there, and the fact that I weigh about 10 times as much as she does, I stabbed half-heartedly at the jug,
dropped off. Doh. Tried again. Cussed.

“Go, Alice!” I thought I heard a high voice call.

I scowled blackly at the bulge.

I studied the move, feeling familiar curiosity. I could maybe really commit and make it work. It might take a number of tries. I also considered these
possibilities: rotator-cuff injury. SLAP tear. Ambulance, MRI, surgery. Or that I would at least be taking another 15 or 20 minutes that were really
intended for the photo camp.

I reached up, firmly grabbed the quickdraw, and yarded on it.

Alice is in Chains.

Then someone, perhaps Ben, a different model, cheered for me from the ledge, drawing the other occupants’ attention and encouragements. My face flamed.
Were they admiring my A-1 technique?

It worked, though, and I knew I’d soon forget about my little tussle, and that it was preferable to surgical events. Why, life could simply go on as it
was, instead of violently changing for months. Still I arrived at the ledge sun-scorched and secretly grumpy.

Minutes later someone asked for a belay.

I belayed, of course.

On August 2, from the site of my son’s mountain-bike race in Angel Fire, New Mexico, I smilingly watched on video stream as Delaney rose and rose and rose
on the Psicobloc wall, 55 convex feet above a translucent pool in Park City, Utah (Read the report here). In early autumn she, who was valedictorian of Frisco Centennial High School, entered Colorado State University,
in Fort Collins, a place of many climbs and climbers. Her adventures in wonderland have just begun.