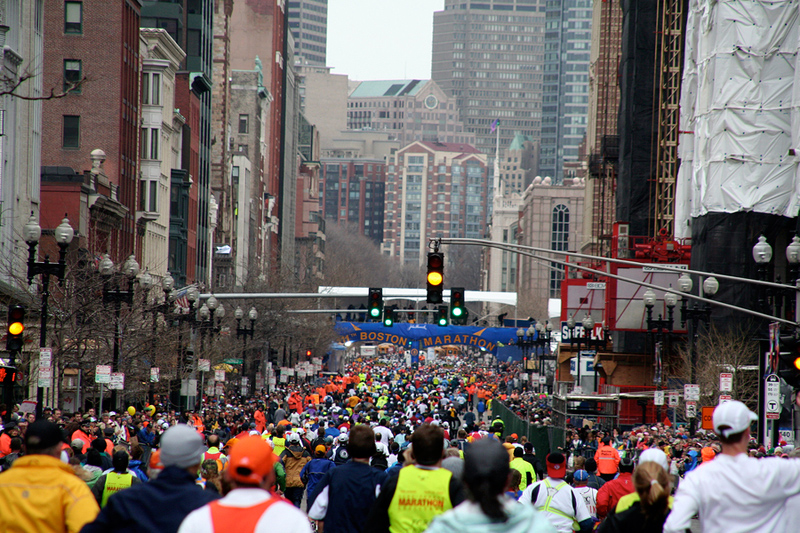 They called it the Best Seat in the House party. I used to work in an
office at the corner of Boylston and Exeter streets, right by the explosions that tore the Boston Marathon apart. Number 711 Boylston was our address,
with a perfect view of the finish line. The bleachers. Our office, a publishing concern, had a big party, and we all watched and yelled from the windows.
Of course, we also went out and strolled around.

So the images from the Boston Marathon were very haunting but also very familiar. Raben Publishing was located on the north side of the street, across
and maybe a block away from the library, where we sometimes went for research (no internet then). A block in the other direction, also on the south
side, was Lord & Taylor’s, where my friend Tracey Minkin dragged me to spend part of the $300 check I had just gotten from the old mountain compendium
Ascent, over two years after writing the story appearing in it.

We were on the second floor, in the red-brick building I keep seeing on the news. And we still laugh—in fact, some of us just did all over again
on Facebook a few months ago—about the time an article (about Patagonia, I think) arrived from a laconic writer named Joe. It was a beautiful
day and my boss Chris Bergonzi, a marathoner, opened the windows to his corner office. The wind on that pretty spring day picked up the pages of Joe’s
article and blew them out the window.


I don’t even remember who won the Boston Marathon that year. Was it Grete Waitz? I do remember tearing up to see the wheelchair guys arrive first,
as they always do (though I hadn’t realized it until then), and a legless man on a low skateboard-like vehicle. The only other thing I remember really
well is seeing the middle- or maybe back-of-the-packers. The ones whose friends or families joined them for the last few blocks, perhaps walking. We
cheered for every one, and teared up for them, too, and the magnitude of their effort, and the support they were enjoying.

Raben Publishing was comprised of UltraSport, Bicycle Guide and Walking magazines, all under the one roof. Most of us who worked
there participated in something, from running to triathlons to skiing. I was a climber, though that year I entered my one and only running race, five
miles in Central Park on New Year’s Eve, our start designated by fireworks and with aid stations offering champagne (I remember a few runners stopped
there for good). I just thought it sounded fun, and traveled down to New York, stayed with my sister there, and invited two old friends from journalism
school who were still in the city. Jeff Parker was one, a UPI reporter who rode his bike everywhere, and had no trouble joining me to run it. What
I hadn’t possibly expected was to feel like a hero—for a minute there, I was in the Olympics—when I finished amid long rows of smiling,
cheering spectators on both sides.

Big Stone Publishing, where I am sitting as I write this, the day after the Boston Marathon disaster, is also a melting pot of participants: runners and
climbers, skiers and bikers or hikers, most of us some sort of hybrid. We publish Rock and Ice, Trail Runner and, once a year, the reconstituted Ascent.

I am unable to concentrate on my other work, though it is piled sky-high on my desk. Those hurt in Boston are our people. Participants of all different
abilities, outside for health and focus and the love of effort, and those waiting to cheer for friends or a father or daughter. All who love sporting
endeavor and spirit.


Tracey was in Chris’s office, the corner office, the day Joe’s article blew out the window, saw it go. Did Joe have a copy? Not everyone had
computers yet. Chris just had to brace himself, and immediately call Joe.

Tracey could only imagine the disbelief on the other end. Chris was obviously asked to repeat himself.

Joe did have a copy, marked-up but existent, on a shelf.

I was just a hack runner, with no stake, but I loved the Boston Marathon: the hard-working runners and the milling, smiling populace of the multitudes
who appreciated what they were doing. I feel like I can never again laugh about those papers blowing down the street. By the time this essay goes out,
many will be starting to move on, to think less about this event, though we will all always remember where we were when we heard, like my mother from
when Kennedy was shot, the way I remember John Lennon and the Challenger, Columbine and 9/11. But humans’ lives changed forever on April 15.

Their precious lives, as they were, blew away down that street and they will never get them back. I only hope they can somehow proceed, be supported through
the years, and grow around this event, as we all go on.