Alex Honnold and Hazel Findlay explore world-class climbing across Africa, from the breathtaking orange granite and vast landscapes of Namibia to the bullet
sandstone of Waterval Boven and cliffs above Cape Town, South Africa—captured with stunning cinematography in the 52-minute film, Africa Fusion—directed
by Nic Good of Fresh Air Crew and produced by Robert Breyer of Fresh Rock Films.

Best part of the trip? “I’d definitely say the overall adventure,” says Honnold. For Honnold, the unforgettable journey stood above the quality of the
climbs.

Rock and Ice caught up with Alex Honnold while he was back home in his favorite “office” of Yosemite Valley, California, to learn more about his experience:

RI: How many climbing trips have you been on to Africa?

AH: I’ve been there twice. The first time was just to boulder in South Africa—everybody knows South Africa for bouldering—but
Robert [Breyer] encouraged us to come back and try some of the sport and trad routes. That’s how the trip for Africa Fusion got started.

RI: What did you think of the culture and climbing scene there?

AH: It’s cool, everyone’s super nice. Such a diverse culture, it was a totally different experience for me. Kind of a small
town scene, where everybody knows each other. I felt like everyone went out of their way to show us a good time.

“The granite area [Spitzkoppe] in Namibia is like J-tree on steroids. It’s some of best granite I’ve ever touched”

AH: The rock is awesome. Super featured, like Hueco-like, pretty varied depending on where you are. Most of it is sandstone or granite.
The granite area [Spitzkoppe] in Namibia is like J-tree on steroids. It’s some of best granite I’ve ever touched. Most of the rock is really good.

RI: If you had to pick a favorite climbing area there, what would it be?

AH: I had the most fun at Waterval. It’s a sport climbing area, vacation-style. It’s the place where Sasha [DiGiulian] (video) has been. Super fun, nice sandstone. For bigger stuff, I’d have to say my favorite area was Spitzkoppe in Namibia.

AH: She’s a great climber, super motivated, it was fun. She’s a really good trad climber and the style suited her down there—face
climbing on gear like in U.K. I just spent the last month climbing with her in Australia too.

Hazel Findlay is currently recovering from shoulder surgery. She reports: “In a drugged-up stupor but ever so happy because it all went to plan. Now for a week of sleep and then a crash course in patience.”

RI: Best part of the trip?

AH: I’d definitely say the overall adventure. Robert put together some really fun rest day activities. We went out to Cape Horn. We saw
some cool animals in the game reserves. I’d say my favorite part was the overall experience of traveling in Africa. It’s a really cool place.

Stay tuned for this Friday’s Weekend Whipper of Alex Honnold from the trip!!! 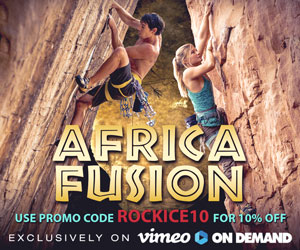