Jake Norton, climber, director and producer of High and Hallowed, on the making of the film, climbing the world’s highest peak and how Everest has changed:

In 2012, Norton, along with David Morton, Charley Mace, and Brent Bishop, returned to Everest to retrace the footsteps of the bold and visionary efforts
of the 1963 American expedition—the first American ascent of Mt. Everest and the pioneering first ascent of the West Ridge by Tom Hornbein and
Willi Unsoeld.

With combined footage from the 1963 and 2012 expeditions, the award winning film, High and Hallowed, delves into the sheer commitment, step-by-step
struggle and the lasting impact of the 1963 American Mount Everest Expedition.

The film was scheduled to be released online in the beginning of May, but in wake of the April 25 earthquake that rocked Nepal, directors/producers Norton
and Morton decided to hold off.

“We can’t in good conscious take money from a film that was built on the backs of people in Nepal,” says Norton. “We wanted to make sure we were doing
the right thing.”

Jake Norton and David Morton will donate their share of the film proceeds to the families of expedition workers who lost their lives, homes or were injured
in the earthquake of April 25.

Rock and Ice caught up with Jake Norton to learn more about the film, climbing the world’s highest peak and how Everest has changed since 1963.

How did the idea for the film come about? How did you get involved?

I’ve always gazed longingly at the West Ridge, inspired by the history of the first ascensionist, inspired by Tom Hornbein, Willi Unsoeld and the 1963
American expedition—the vision and audacity of the ’63 party. The West Ridge is a ballsy route even by today’s standards.

I had tried to plan a trip in 2009 with Eddie Bauer but it didn’t happen. I kept the pressure on, saying ‘Hey, let’s keep this idea going, let’s make it
happen.’ After pushing to make it a reality, it finally came together in late 2011.

The 1963 American Expedition was the first siege style assault of its size: 19 American climbers, 32 Sherpa, and 909 porters carrying 27 tons of gear. Do you think this forever changed the style of Everest climbing?

Big expedition style climbing came well before the 1963 American expedition. In the pre-WWII years, the idea of climbing big peaks was to ‘overwhelm the
enemy with numbers.’ I’d say it started in the 1920s and ‘30s, then ’52 with the Brits, ’53 with Hillary. Nineteen sixty-three was a reflection of
what came before, having ample support, establishing camps—it was a fusion of styles.

But even with a siege style assault, after high camp, it’s like cutting the umbilical cord.

In 2012, what were the conditions like on the mountain and how was filming up there?

The abnormally dry winter in the Himalayas made for pretty crappy conditions. We could see pre-historic blue ice from Base Camp, reflecting light off the
Lhotse Face.

There was no snow like in normal years. The climbing itself wasn’t difficult, but it was slow moving and hard to descend. We weren’t planning on fixing
ropes, but we ended up spending a lot of time on that.

Dave and I have done enough filming in the mountains to have a good system down. We had to carry the extra weight of the camera gear, but filming actually
adds an element of fun. It helps to break up the tedium of climbing.

We never set up shots while on the mountain; it was more guerilla-style, run-and-gun filming.

There were no hair-raising moments. In dangerous areas, such as the Ice Fall, we didn’t film as much so we could pass through more quickly.

How much of the film is original 1963 footage and how much did you guys film?

High and Hallowed is about 70-percent footage from 1963, 30-percent contemporary.

The film jumps back and forth between eras to tell the story chapter by chapter.

I had hoped to keep the film just about 1963, but from a story telling standpoint, it made more sense to add the contemporary perspective. Even with modern
equipment in 2012, our team was unsuccessful. That goes to show how hard the route is.

How has Everest changed since 1963?

Everest is a different place. With the film, we wanted to ask if the Everest of 1963 still exists—not at all—it’s a different mountain altogether.
The systems in place today enable people to climb the mountain with very little experience.

There are different routes, however, and outside of the standard route you can still find adventure and have an authentic experience.

The current style of large, commercial expedition guiding is a breakage in the system. It’s not something I want to be a part of.

There’s a bit of a silver-lining to last year’s avalanche in the Khumbu and this year’s earthquake. Hopefully big outfitters will take a good look at how
they are operating and change their ways.

A complete shutdown of the mountain is not the solution, since the Sherpa and so many people in Nepal rely on the mountain and tourism as a means of life.
But we need to engage a conversation in a productive way to look at how the mountain is climbed and the practices of big commercial outfitters.

What’s your most memorable moment or experience?

What I enjoyed most about the experience was not the climbing or contemporary aspect, but the connection formed with those still alive from the 1963 expedition
and bringing out their story. How they perceive Everest is far different from today. It was more about the pure adventure, about self-discovery, about
giving back to the community.

Tom was afraid of being know as the ‘Doc who climbed Everest.’

It was also great to get off the standard route and climb with a small team, to be away from it all.

Would you ever go back to Everest?

I have no plans to return. I was more motivated by the history of climbing and the heroes that came before me than standing on the summit. 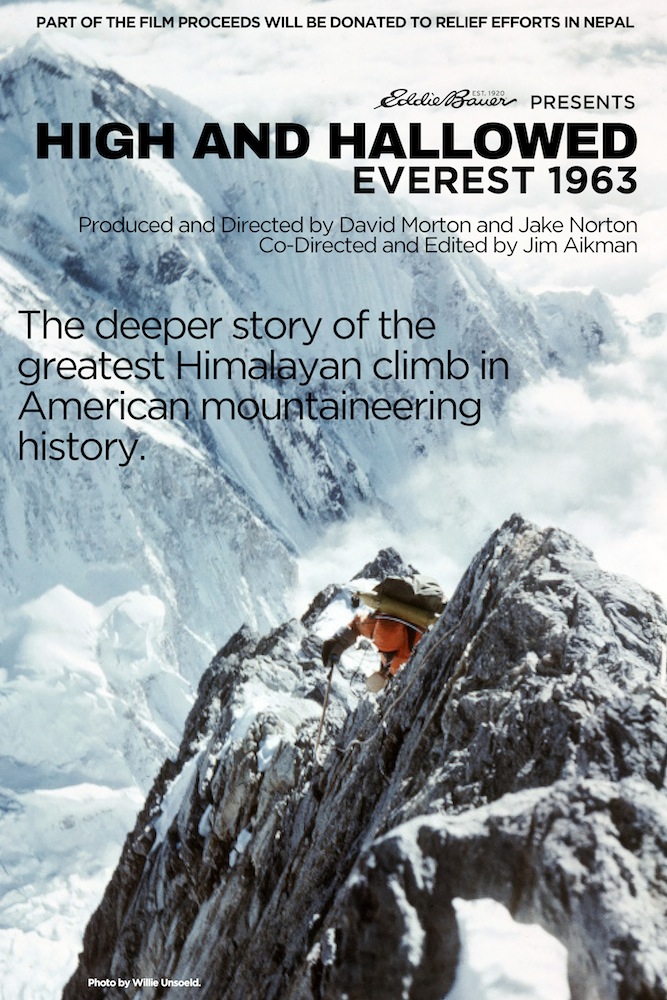 High and Hallowed: Everest 1963 is the deeper story of the greatest Himalayan climb in American mountaineering history. Narrated by best selling author, and Everest veteran, Jon Krakauer, High and Hallowed takes us from the turbulence of American in the early 60’s to the solace of the highest mountain on earth where man pits himself against nature. Profiling the bold and visionary efforts of the 1963 American Mount Everest Expedition, the film examines the sheer commitment, step-by-step struggle and the lasting impact of the first American ascent of Mt. Everest and the pioneering first ascent of the West Ridge by Tom Hornbein and Willi Unsoeld. Five decades later, a team of elite mountaineers journey back to Everest to attempt the same routes climbed in 1963 and discover if the essence of risk, adventure and the unknown that drew the first Americans to the summit still exists on Everest today.

Read the Rock and Ice review